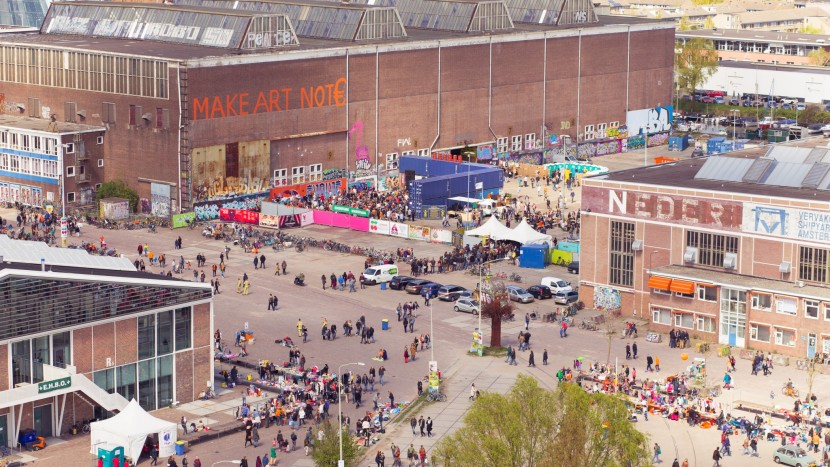 From shipyard to cultural metropolitan square
From the 1920s until the 1980s, the NDSM-wharf was one of the biggest shipyards in the world, regularly launching huge impressive tankers from its slipways. After this activity ceased, this sprawling location – and its imposing backdrop of crane tracks, sheds and the gigantic slipway – became a home port for creative pioneers such as Dogtroep and Robodock. Numerous initiatives followed: Over het IJ Festival, New Dakota, music festivals such as DGTL and other cultural events.

📰 Check out our Magazine to see read more about the history of the NDSM-wharf and to see what has passed here.

📆 Check out our Programme to see what’s on.

The colossal shipbuilding shed called ‘NDSM Loods‘ was transformed into ‘Kunststad’ (‘Art City’), an architectural monument housing some four hundred artists, designers, architects and set designers: one of the biggest artistic incubators in The Netherlands. It also functions as a popular events location.

Ambition
The area’s pronounced, open and spatial character makes the wharf attractive for creative experimentation, innovative ambitions and entrepreneurship. It’s a place that appeals to the imagination and encourages to create things that wouldn’t be possible anywhere else. For example, the largest Street Art museum in the world will be located in the ‘Lasloods’ (2020). Companies like Hema and Red Bull have also found a unique home base in NDSM. The industrial heritage combined with new creative activity creates an interesting dynamic.

Living
The NDSM-wharf is an icon in itself, a city in a city, which is further emphasized by crossing the IJ with the ferry. Where there are many (restored) monuments on the east, there is more space for urban development in the west. Life is central here. Living with a view on the IJ, working in a new city district. Drinking coffee around the corner, work at the waterside or in one of the newly developed office spaces on the site. Here you can lift up your heart in unique shops, visit exhibitions or go to a festival with friends. This makes the special dynamics of the wharf even more lively. A home for pioneers, in a 24/7 urban district.