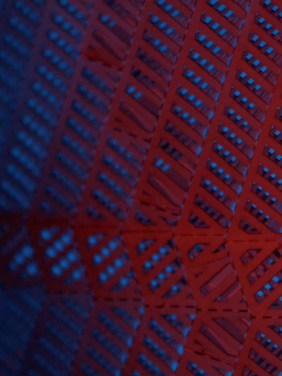 The design of the object is repetitive. This relates directly to one of the fundamental building blocks of (modern) music; Rhythm. Music is the prime motivator to reiterate the articulation of light and shadow on the sculpture. Using light, contrast is generated which articulates the sculptural form of the repetitive origami tessellation. By introducing colour music generates an intricate moire shadowplay on the projection surface behind the sculpture.

The Origami Tessellation Shadowplay aims to make a translation in its purest form, transcending music from the auditory senses to the visual senses, without algorithmic programming. The Origami Tessellation Shadowplay is visual music. It’s about rendering the sensitivity and tactility of each musical note played, translated into light, in real time.