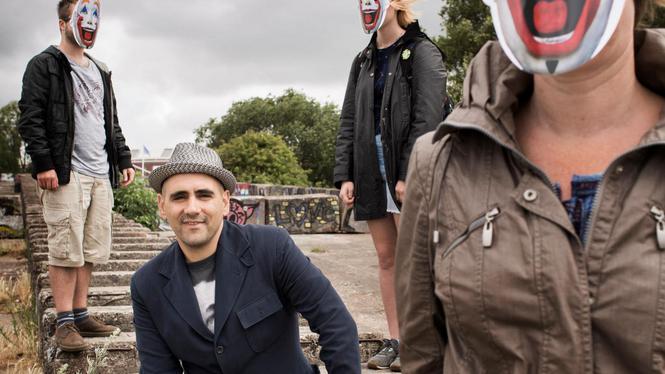 With Noorderlingen, performance artist Abner Preis is presenting a fairy tale about zombies and a happiness tree at the NDSM-werf. A political warning and a human message packaged as a spectacle – with chainsaws.

Once upon a time, there was a village where everybody was unhappy. They worked all the time, had no time for their pets, children, or one another. They were zombies. Then the local mask-maker came up with a way of giving his fellow villagers at least one day of respite every year: masks made of wood from the happiness tree.

But just as he was about to cut the tree down, the villagers protested. The tree presented them with an alternative. The villagers shouldn’t sacrifice a new tree every year – but keep the masks on. Then they would be happy all year round – at least one the outside.

The Mask Maker and the Tree is a typical Abner Preis fairy tale. It seems to have a childlike simplicity, combines black humour with a happy end, but also has deeper layers.

“We recognise ourselves in the drudgery,” says Preis, who will be performing his story at the NDSM site over the next few days. “The villagers are kind of like zombies. The masks they put on show clowns’ faces.”

“Ever since the olden days, Fools have sat at the King’s right hand – they put power into perspective. But now, we are living in a time when the clown has become King. This leads to short-sightedness, including from an ecological point of view. The quick fix – to be relieved of the misery for one day – costs the entire forest.”

Pieter Breughel
Preis has been incubating his latest story for a long time now. “The first seed was planted in Vienna, where I saw Pieter Breughel’s The Fight Between Carnival and Lent: all these ugly people from the Middle Ages letting it all hang out before having to restrain themselves for 40 days. Then I had a residency in Warsaw where I witnessed the destruction of the oldest primeval forest in Europe.”

“Those responsible are ordinary, little people with money worries and little hope for the future. It’s understandable that they are trying to earn a crust, but the forest looks like a war zone.”

Place for outcasts
To Preis, Noord is a natural place for the story distilled from these experiences to end up. “This was originally a place for outcasts – not exactly the happiest part of town. Now, they are being driven out by gentrification. Noord also has it’s fair share of issues in the ecological area, what with Shell, the shipbuilding and a seriously polluted IJ. But now the area’s been all cleaned up and polished. Noord now wears a mask too.”

For his performance of The Mask Maker and the Tree, Preis found 35 residents of North Amsterdam to play the villagers. The Nieuwendammer Shantykoor choir sing pirate songs when they set off to visit the happiness tree. Everything will be shot in just one take. Which is pretty exciting – you never know exactly what is going to happen.

But if you can’t make it Sunday night, the video will be shown during the Over het IJ Festival and Cure Park. These screenings will be narrated by Preis and given a musical accompaniment by the Shantykoor choir and a cello.

“This is the biggest production I’ve ever made,” Preis says. “And the most personal. For once as the narrator I am not outside of my story. I too am part of the community.”

Useable tree
And the best part is: the story is already having an impact. Preis: “While we were looking for a useable tree, we ended up close to Arnhem. There was an old oak that was threatening to destabilise a house, so had to be cut down anyway. But two weeks ago I got an unexpected phone call: ‘Abner, we can’t chop it down, there are birds nesting in it.’ I cheered on the inside: this tree at least has been saved for another year.”