In times of #socialdistancing, we’d like to introduce you to all those people at the wharf. We’ve asked them for their Monday motivation and how they’re getting through these unusual times. This week: Josan van der Storm. 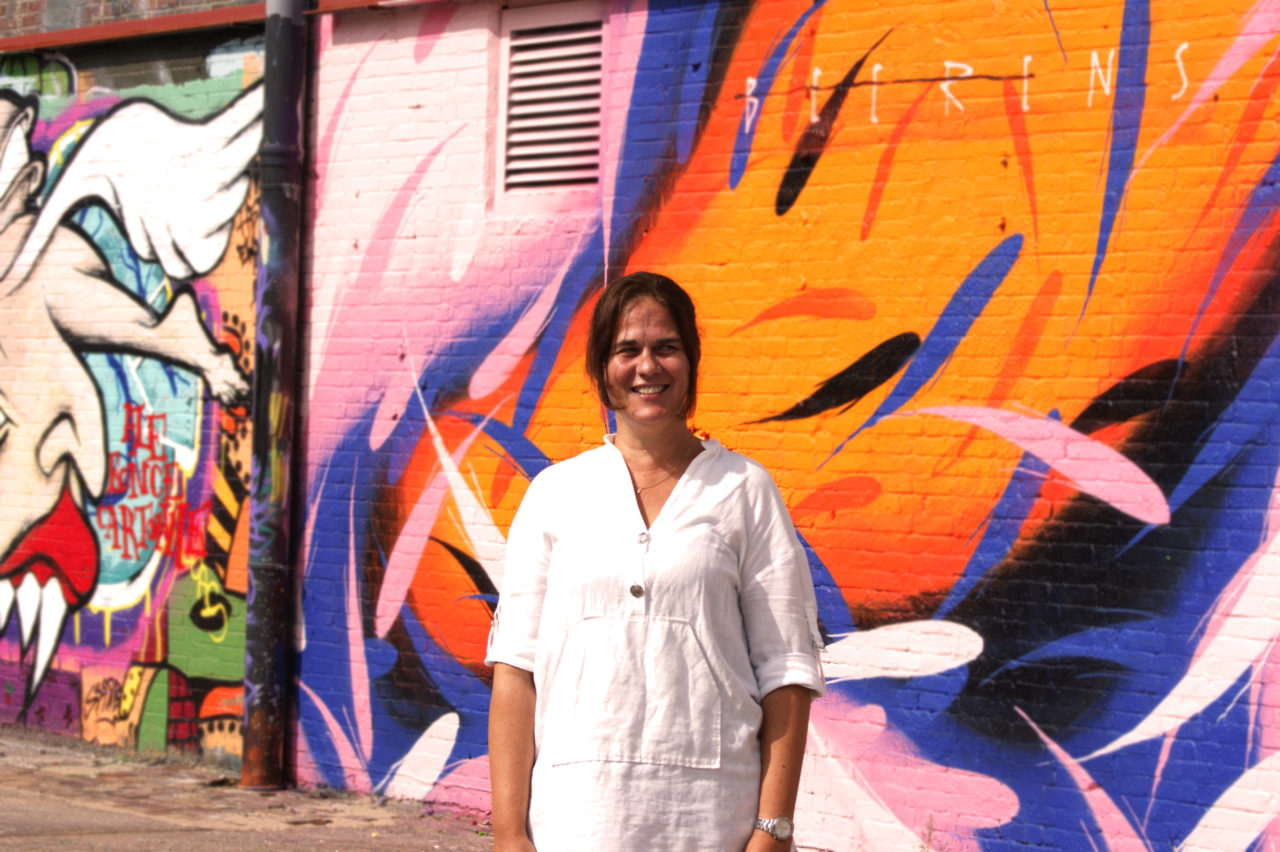 Josan van der Storm is the office manager of the Stichting NDSM-werf foundation and thanks to her everything runs smoothly at the office. She calls herself the dinosaur of the Foundation, because she is one of the team members who has been here for about 7 years and has seen a lot of changes on the wharf. Moreover, Josan was born and raised in Noord and she knows the NDSM site and the people who can be found there like the back of her hand.

Hi Josan! You grew up in Amsterdam North. Have you always felt connected to the NDSM-wharf?

The NDSM-wharf has been a part of my life for a long time. I grew up in Nieuwendam and the Klaprozenweg was the road from Noord to the Coentunnel. In those days the Zeeburger tunnel was only a plan and the IJ-tunnel and the Coen were the only highway exits to the south of Amsterdam. The road along the NDSM-wharf was always one to stare out of the window of the car: numerous cranes, large ships and the characteristic big blue crane over the Y-slope.

My father had worked in the harbours of Amsterdam and at home he hung the pictures of a number of NDSM-ships; de Oranje and the Johan van Oldebarnevelt were his favourites. The cross-section drawing of the Orange with all the different spaces with drawn cars and tennis players, was one to be fascinated by as a child. Around my 21st I moved from Noord to the “real” city, but my mother still lives in Noord.

I hear you can tell me a thing or two about Noord! And how did you end up at the Foundation?

After I worked for the municipality of Amsterdam in Noord, the NDSM shipyard became a project for which I started to work and thus a part of my life again. Because of the crisis my job at the municipality was lost and a job became vacant at the NDSM shipyard foundation. Then I took the plunge to apply for a job. And now we are already seven years further! The Foundation’s assignment was extended for ten years in 2018 and we have entered a new phase. The future of the NDSM-wharf is not yet to be redeveloped and we have made great plans for the coming years.

That sounds promising! How have you experienced the past months?

These past few months have been the strangest ones ever. All the so-called certainties were gone. An empty agenda, an empty NDSM-wharf, all the plans made on hold and all working at home. Fortunately, digitally more was possible than we thought and we as a foundation have entered a new plan-making mode. But that was certainly not easy. All the income from renting out the site was no longer there or had become uncertain. With all kinds of art and aerial work we worked hard and slowly plans were realised such as the Zomerwerf and vegetable gardens for the neighborhood (residents). It is still exciting what will be possible in the near future; as an event site everything goes through the 1.5 meter commission of the district council, which is a long road and the word ‘event’ still makes everyone in the municipality very cautious. Meanwhile, the first IJ-hallen have been organized again, so the beginning is there. At home it was also looking for a balance; my youngest son in high school had a really hard time.

Being all together on the internet was also a difficult once in a while and staying mentally balanced was also a challenge. All days started to look a bit like each other and fortunately there was daily contact with the team to keep the connection. I am happy to be able to go to our office on a regular basis and to have real contact with each other again. We made the office COVID-proof with some adjustments and that works fine.

Even though it was difficult to find a good balance from time to time, has there been a golden tip that has pulled you through the days?

My survival tip in this day and age is to think about what everything does to you. For me these were my yoga classes; even if it was different alone, walking and enjoying nature. It was special to see that life just went on there and the silence and sounds that were suddenly audible that were otherwise drowned out by noise. Also enjoying the emptiness in places where you didn’t think it would ever be so quiet and empty again. The empty city and roads and a Schiphol airport full of stationary planes had something surreal.

‘Surrealistic’ is a nice word to summarise this time. Have you discovered new music or podcasts lately?

I haven’t really listened to one kind of music, but a mix of music I listen to myself and the music my son listens to. So actually got to know a.o. Kanye West and Travis Scott which was actually quite fun. The podcast I recommend is of course our own; the NDSM X with my colleagues Petra Heck, Ewa Scheifes and Eric Seleky, an interesting and captivating mix of topics and conversation partners.

What I also like is Hiske Verspille’s series Cheft in which she interviews people from the Amsterdam food world while they are cooking, very fascinating and inspiring. The past few months I’ve also read more that I have to confess; I’ve read Finse dagen by Herman Koch and Zwarte schuur by Oek de Jong, both highly recommended! Both gentlemen can write very visual. Finse dagen’ is based on the life of Herman Koch himself and sketches a beautiful time picture of his youth and how he was formed by the death of his mother at the age of 17. Black Barn’ is about a celebrated Dutch painter whose life was marked by a fatal accident in his adolescence in which he was found guilty of the death of a girl from the village where he lives. During a retrospective exhibition of his work in the Stedelijk Museum, the story reappears in the press, making it a prominent part of his life again. With my sons, I watched film classics on Netflix that they hadn’t seen yet; The Matrix trilogy, films by the Coen brothers and Quintin Tarantino. And the Japanese anime they watch and love; Evangelion and the Disastrous life of Saiki K.

These are a lot of good tips! Are there any works of art in particular that are among your favourites?

I have to say that I really like the light artworks we currently have on display at the NDSM-wharf by Annaïk Lou Pitteloud, the Neo Logos. Furthermore, my favourite in the shed – which actually hangs at its best on the doors of the lock in the dock of the Y-slope – is ‘NOT BANG HISTORY’ by Thierry van Raaij; artist in the east wing of the NDSM shed. Words that are illuminated make a special impression; they keep you busy and keep up with you.

What did you miss the most?

Still, the contact with my closest family and friends. Not touching each other anymore is also very hard for me, giving your mother a hug is such a common thing, then it’s so weird that you have to think: oh that’s not possible now. It’s a strange time for people, you notice at the moment that many no longer feel like keeping to the measures. While it still works to keep you to them.

I think the hand-washing regime is one to keep doing, not shaking hands with each other is strange, but it’s better to keep it for now. I turn around when it’s too busy somewhere and try to keep my distance with strangers. My mother had corona at the beginning of the pandemic. Luckily she didn’t get it very serious, but it wasn’t something you wish for someone. I must confess that I understand that certain professional groups are annoyed by the way things are now. It’s still very unpleasant when you see your whole company breaking down, or no longer have a job because of the 1.5 meter rules and people don’t abide by them en masse. Luckily the hospitality industry was allowed to open and organize things here on the site again and this summer we have a very nice program for children and young people with MidsummerMokum from the municipality. For all event organizations and artists it is still nothing or not much. In my opinion we have the ultimate terrain to organize something with the distance in mind. But getting permission or a permit is still a long way to go.

I hope we don’t lose the connection we’ve had for a while in the hustle and bustle of life.

That remains difficult… Are there any positive things you’ve been able to get out of this time?

I’m glad to see that people have found each other in the neighborhood more. I live in a fairly new neighborhood and everyone was often too busy to have a chat, but gradually this changes. It’s nice to see that people again want to do something for each other selflessly. Life at the speed we were used to wasn’t there anymore, but with that you get an eye for other things.

What do you hope from a time after corona?

I hope we don’t lose the connection we had for a while in the hustle and bustle of life. Especially for the young like my son of fifteen and the elderly like my mother, it was a lonely period during the lockdown. I hope we don’t have to go back there. I do think we will never forget 2020, it is a period we could not have foreseen at the beginning of the year. Hopefully mainly positive things from this period will be preserved and within a short time a way will be found to keep the virus under control.