In times of #socialdistancing, we’d like to introduce you to all those people at the wharf. We’ve asked them for their Monday motivation and how they’re getting through these unusual times. This week: Eric Seleky.

Eric at the opening of the NDSM Summer Wharf. Image: Benjamin Kotek.

Since October 2019, Eric Seleky has been marketing & communications manager at the NDSM-wharf foundation. Previously he worked at the Plastic Soup Foundation and organized the Museum Night in Amsterdam. That was before the NDSM also became one of the participating locations.

Of course I knew the NDSM-wharf as an area where there were always cool festivals and from Pllek and Noorderlicht. I had never really realized that there was a whole organization behind it, until I saw the vacancy at the time. It was actually already closed, but I decided to send a letter anyway. I’m very glad I did that, because now I got the job.

A very good addition to the team! What has helped you through the day lately?

I got the most out of the tip I got: let it go. With the coronavirus hitting, we’ve had to make a pretty good change of pace here. The disappearance of all events also made it very difficult to make cultural programming possible. In addition, we had just completed a fairly intensive process to form a new vision for the Foundation and the wharf. A week later the virus broke out. You have no influence on this kind of thing and unfortunately little influence on all the measures that resulted from it. So sometimes you have to let things go, otherwise it will only frustrate you. For me that did help. And of course trying to keep your normal rhythm as much as possible.

No matter how difficult, that’s a nice attitude. Maybe music has had the power to help you a little bit with that. What are your current favourite songs?

I think I have a rather eclectic taste in music. I can listen to everything from carnival crackers to hip-hop and smartlappen to classical music. The thing I can always listen to is Michael Jackson. The last few weeks I’ve been listening a lot to the Black Pride playlist as well. There are very cool tracks in that list of which a lot I didn’t know before.

Good one! And do you have any podcast tips?

At the moment I’m listening to two podcasts actually: De Willem Podcast. This podcast has been running for quite some time and followed the whole process around Willem Holleeder. I have got a fascination for the underworld and especially the underworld of Amsterdam. It’s still a crazy idea that in the city where you live there are so many intrigues and stories playing out, in places where you yourself are walking around. Now, of course, the process is over and they actually talk more about other organized crime, such as the Marengo process around Ridouan T. Also very exciting. The second podcast I’m following is ‘The Plantation of our Ancestors’. I’ve been listening to it recently since the whole BLM movement started here. A very interesting, tensive and sometimes uncomfortable story of two women. One comes from a noble family, who used to own slaves in Suriname who worked on their plantation. The other woman descends from these slaves and together they investigate their shared past. Pretty special so far.

The latter podcast sounds very interesting and relevant! As a film fanatic you will undoubtedly recommend a few things. Is there a film in particular?

That’s a tricky question; there are so many great movies. I started watching all kinds of classics with two friends. Some again and some ‘because you must have seen them’. We’ve done about 50 titles in white bowls and about every week we blindly pull one out and then we’ re going to watch that movie. Sometimes there are very old movies from the 40’s or 50’s, those can be tough, but sometimes very surprising. I last saw The Sting from 1973 and This City Heat from 1968. The latter is actually very topical now. Very cool. Recently I also saw The Lighthouse with Willem Dafoe and Robert Pattison, about two men living on a lighthouse island for a month at the end of the 19th century. Very grim and oppressive film and because of the almost square black and white frame it becomes very tactile to live in such a small annex. Definitely recommended.

I’m curious what title will be drawn this week! And Eric, what have you missed the most these past few months?

I’m not a very touchy person really, but I notice that I do miss the handshaking, but also giving a bro-hug, quite a lot. Yet, when someone says ‘we’re shaking hands again’, I’m still a little hesitant. And next to that going to the café. I also still find it a bit complicated how it works with signing up and reserving time slots. At the same time I started to appreciate my own home and surroundings more.

That greeting can indeed be a bit uncomfortable…haha! Have you taught yourself a new habit?

I had been doing yoga every morning for a while, not anymore, but I want to pick that up again. I enjoyed doing it in the privacy of my own home. I’m not the most agile person there is, so it probably doesn’t look so smooth yet. I also started cooking more. Something I always liked to do, but sometimes didn’t get have time for. Now I also try to work on my recipes more and share them through my girlfriend’s website: mooncake.nl.

What a great platform that is! I’m going to sign up for the newsletter right away to stay informed about her latest food discoveries. 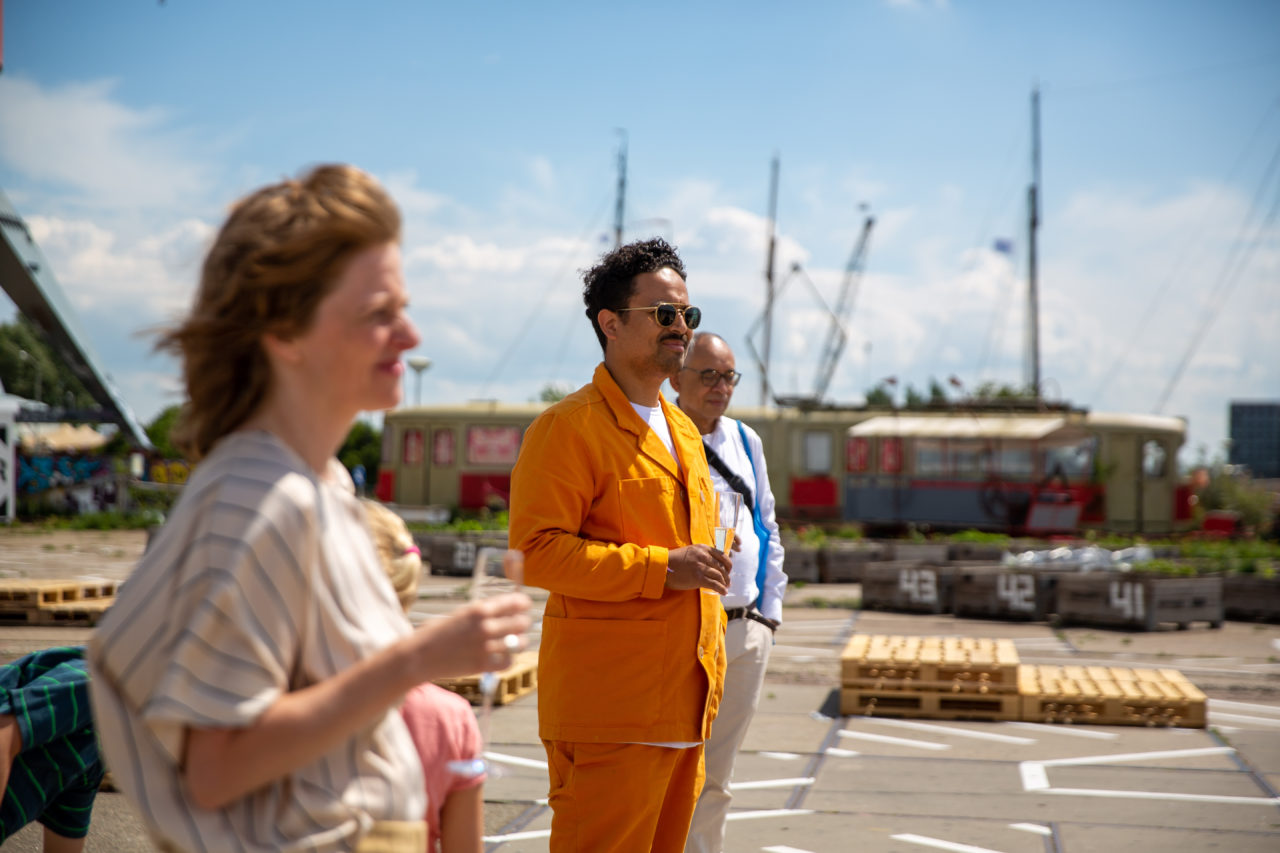 Eric at the opening of the NDSM Summer Wharf. Image: Benjamin Kotek.

Have you come to a certain realisation because of the time we’re in now?

In my opinion, we have been forced to face the facts about how vulnerable our society turns out to be. Also that if we really have to, we can work together quite well all and we are capable of many things. I hope that we will learn from this time and remember, as I think many of us do, that we can do without; without all the flying holidays, without going to the office every day, without shopping every day. The earth has pulled the handbrake for a moment and indicates that we need to take it a bit more easy.

Amen to that. If you approach it that way, this time is also quite inspiring. What else do you get your inspiration from?

I really like the pieces that have created at the wharf lately. The walls are really becoming a canvas of what’s happening in the outside world. The Supernurse is of course very cool, but also Mark Rutte and now a beautiful image of Black Lives Matter. Because many works also disappear again, you are reminded of the fact that no setback is forever and that we as humans are super resilient and creative.

And finally, what are your expectations of a post-corona time?

I already notice that people really want to get going again: festivals, terraces, parties, get-togethers, but also to be creative and busy again. I hope there will be room for that again in the near future. But I’m also afraid that people are becoming more and more opposed to each other. With the BLM-discussion, but also the anti-ameterandahalf protests. And I think that because we’ve been inside for so long and got bored, people are taking a much sharper stance. You can see that discussions, especially online, but also in public space – think of the daubed statues in the city – are being conducted much harder and the confrontations are becoming more intense. I hope that we can continue to listen to each other a little and keep a cool head. The summer is still warm enough.