For the project Tower of Babel at NDSM, we enter a conversation with eight artists, who each contributed to this art installation in their own way. Through a variety of workshops, they invited Amsterdammers to reflect on their vision of the city of the future. Together, they created multifaceted artworks that will be displayed in an eclectic wooden tower construction at NDSM, visible from September 18 to October 17. In edition 2: graffiti artist Mick La Rock. 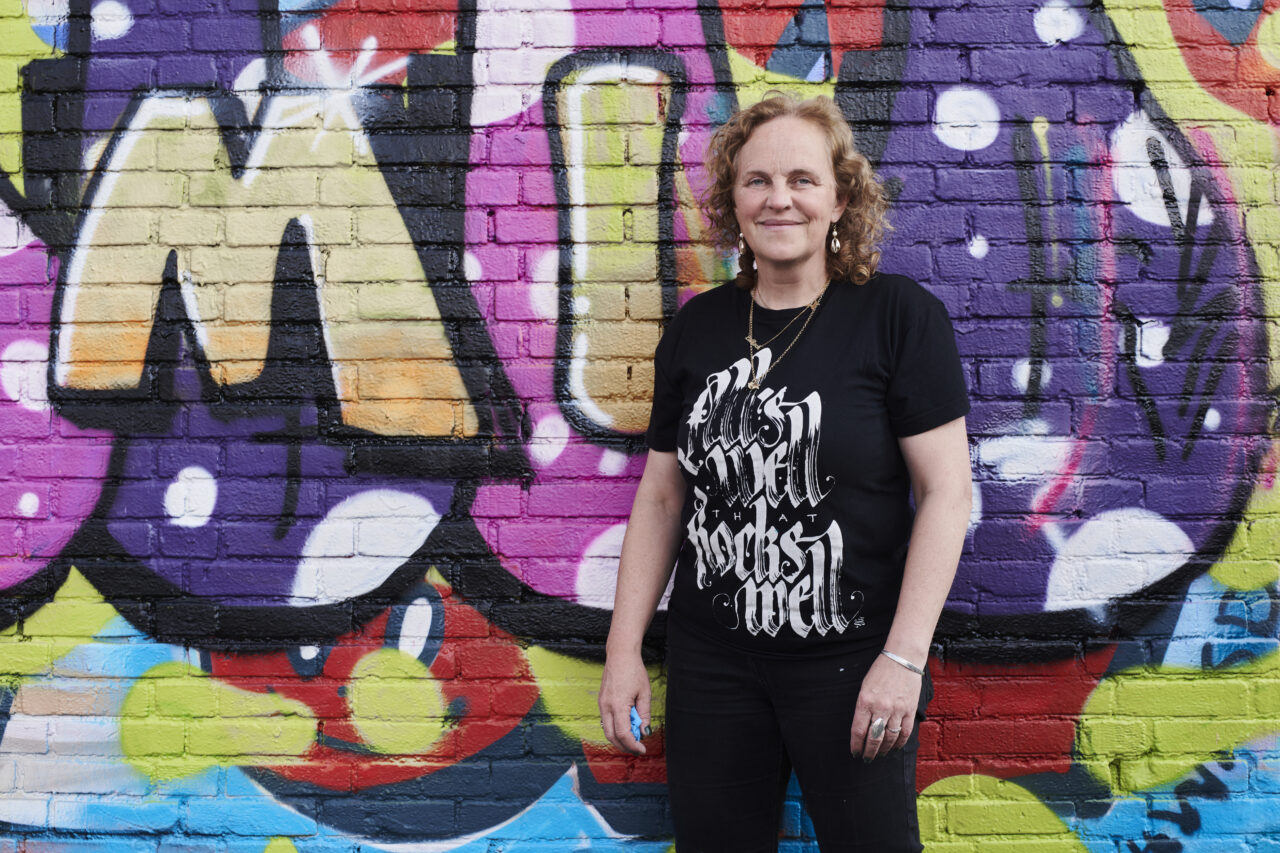 Next to this video interview, Teus Hagen met with each artist for some more in-depth questions. On September 4, he meets Mick La Rock at NDSM as she’s lugging around a box of spray cans for her second graffiti workshop of the day.

For me, the ideal city is one where the social aspect and equality continue to exist. You see this disappearing more and more: people with lots of money determine what is permissible, while uncle Jan and aunt Annie have a hard time holding on to their place in the city. I stand for a city where all people may exist and can exist!
In my ideal city, there are also many edge-areas. This used to be normal, but now it is almost unique. A city that has been polished up becomes boring; you might as well go and live in a village.

I didn’t grow up in rundown edges, but I was often familiar with them. For example, in the neighborhood of Groningen, where people made art in an old school building. Artists provide livability in the city; they come up with the fun things that make a city attractive. At the beginning of my graffiti life, I sought out these kinds of places a lot: in my twenties, I could be found non-stop on these edges. An abandoned Renault garage where parties were held, places like that. Here, you could be whoever you wanted to be, and this is also part of my ideal city: freedom.

I know NDSM mostly from the slope [‘de helling’] – this was a typical spot for graffiti artists. This was the time when De Zwevende Ateliers were set up and it was still much less known. Now I really only come here for workshops or to paint a piece on the side of the warehouse, where it’s allowed. And at Sexyland, of course, I used to come there too.

I think it’s a very good place, precisely because this issue of the ideal city is so relevant here. This has always been a place where creatives find the freedom to create, build studios, and start a bar or restaurant. But gentrification also takes place here, because mainstreamers think “Gee, it’s nice here, it’s livable” and then want to hang out here. It’s just like Williamsburg in Brooklyn at the time. There, too, you had those overgrown harbor-sides. That’s where people were fishing, or shady business took place. And as a graffiti writer, you could just play there; true urban exploring.

For me, graffiti is a visual language that you receive as a gift from the city

The original Tower of Babel story symbolizes a balance between pride and ambition on the one hand and humbleness on the other hand. (Humanity yearns to achieve the highest possible by building a tower to heaven, but God punishes them by being for being overconfident and too ambitious.) As an artist, how do you balance pride/confidence with modesty/humbleness?

I always try to be modest, it’s in my nature. In that respect, I see the Tower of Babel story as a metaphor. In order to make art, you sometimes have to go beyond modesty in order to be seen. But if you get a lot of positive reactions it is very easy to step out of line. That happened to me once: you climb up the graffiti ladder, and for everything you do, everyone starts clapping. “Oh, so beautiful that piece! Wow, Mickey Mickey Mickey!” Call it delusions of grandeur or hubris, or just put it plainly: your ego starts to inflate.

That’s a process you’re not always aware of yourself. In the ’90s, I was at a kind of peak moment in my graffiti career. The first time I really noticed it was after I left Groningen in 1989 to finish school in The Hague. I really felt on top of the world, like a queen of graffiti. In Assen, I still had a few real friends with whom I had grown up on the streets of Groningen. And one time, because of my vanity, I just walked past them, without greeting them. I’m still ashamed of that, that I hurt my friends like that. You have to be very careful that once success arrives and you’re in the spotlight – whether you’re on a stage or on a graffiti wall (more of an imaginary stage) – you don’t move from modesty into pride. But yes, haters will be haters, there are always people who think something of you. But it is always good to keep modesty in the back of your mind.

Even in Pompeii, people wrote on the walls everywhere. “Don’t piss in my garden!”

Being an artist can sometimes be an individualistic line of work. However, the Tower of Babel project is about working with a collective and bringing many different works made by many different people together. How do you feel about this collective approach to creating art?

Well, break it down to point zero, and then graffiti is just a matter of writing your name. So it’s all about you! But I’m also a teacher and that’s my way of working with people. That’s why today (during the workshop) we didn’t spray individual signs but went to work together, right by the warehouse. This started with a round of introductions and then a discussion. For the first time, I got the feeling that we were really building the Tower of Babel together. And I’m also very curious about how it will look with the work of the other artists.

For example, here it says “CITY” with all the associations this participant had for her ideal city. Sometimes you can’t read it, but that’s not the point; even if others can’t read it, you put your energy into it. And this one is from the local policewoman: it says “OLD & NEW”. For her, this was about the distancing she feels as a district cop in Amsterdam-Noord. She’s in Tuindorp a lot, where the older residents often will notice that a house is empty, and then mothers with cargo bikes move in. The old people then say “Those new neighbors, they’ve been living there for 3 months but haven’t even introduced themselves!”, but then she (the district cop, ed.) says: “Hey, but have you introduced yourself to them? “But the point is that these older residents no longer feel at home in their own city.

In what way do you think graffiti contributes to diversity and polyphony in the city?

On the one hand, it contributes a lot, on the other hand, it contributes nothing at all. If you look at the kind of graffiti we do – writing your name – what does that really offer? We just run around shouting, “Look, I’m here, I was there, I’m on that tower, I’m on that lamppost!” “Look, he’s on that bridge and I want that too!” But still, a city without graffiti is simply not a city. And not just in these times. It’s part of a city that people express themselves on walls and in public spaces, in whatever way they can.

Even in Pompeii, people were drawing all over the city’s walls. You’d read “Mayor Julius is a dick” and “Don’t piss in my garden”, and I like that! A diversity of voices is reflected in the fact that graffiti is an accessible form of art, and for many young people a first step towards the visual arts in general. Graffiti brings color to the environment. For me, it is a visual language that you receive as a gift from your city.

Graffiti also brings a smile to people’s faces and I noticed this during a workshop today. Sure, if it appears uninvitedly on your doorstep it makes you less happy, but in such a workshop setting you also give people a bit of freedom that they normally do not experience. A bit of creativity, a big city feeling, but then in a clearly defined way. But if you had said to me 30 years ago “In 2021 there will be graffiti workshops everywhere”, I would have laughed very hard.