For the project Tower of Babel at NDSM, we enter a conversation with eight artists, who each contributed to this art installation in their own way. Through a variety of workshops, they invited Amsterdammers to reflect on their vision of the city of the future. Together, they created multifaceted artworks that will be displayed in an eclectic wooden tower construction at NDSM, visible from September 18 to October 17. In edition one: Perrine Philomeen, the youngest artist in the Tower of Babel collective. 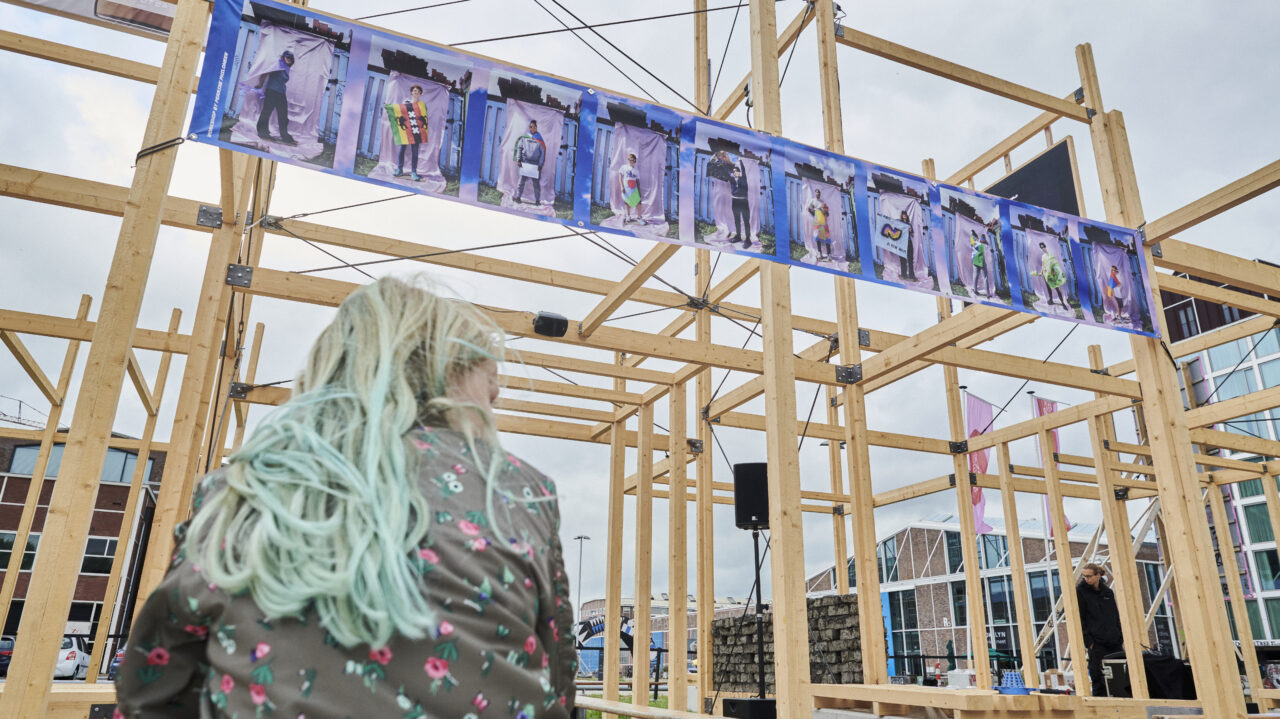 Perrine's photography on display in the Tower of Babel at NDSM. Image: Victoria Ushkanova Photography

On 4 September we speak with Perrine for a written interview. Just as lively as NDSM itself on this day, Perrine energetically leaves the office of the Stichting NDSM-werf, where she has just made good friends with the other participants of a workshop by storytelling coach Fouad Lakbir. In two tall lifeguard chairs, overlooking the IJ river, we talk about her work in fashion, styling, and photography, and her contribution to the Tower of Babel.

In my ideal city, I think celebrating diversity is very important: celebrating superdiversity in a continuously changing globe. I find it very interesting to observe how migration, the internet, social media, and new technologies make cultures mix ever so fast and also create new subcultures all the time. But the city should be approached as an abundance rather than something negative. I think it’s beautiful to use projects like the Tower of Babel to give a voice to people who cannot make themselves heard in society. And that can be in the form of a real voice, but also in making a flag or something else visual.

If you were to confront people in the business district with a Tower of Babel, I think you’d have to approach it differently.

How familiar were you with the original story of the Tower of Babel? And what do you find the most interesting about this story?

I was already familiar with the story; in high school, we read the Bible every morning. I just didn’t pay much attention to this and so I didn’t remember much of it [laughs]. But precisely because it didn’t work in the biblical story, I think it’s so cool that now, inspired by that story, we want to try to create a tower in which polyphony can be seen, heard, and felt.

From the past, I really only know NDSM from its parties; now I see it mainly as a creative hotspot. I don’t really know yet how far NDSM extends, but I think I fit in with people who are open to seeing and experiencing this place to the fullest. In that sense, the project also blends in well with the environment. If you were to confront people in the business district with a Tower of Babel, I think you’d have to approach it very differently. Here people are probably very interested in it.

The original Tower of Babel story symbolizes a balance between pride and ambition on the one hand and humbleness on the other hand. (Humanity yearns to achieve the highest possible by building a tower to heaven, but God punishes them by being for being overconfident and too ambitious.) As an artist, how do you balance pride/confidence with modesty/humbleness?

Well, I sometimes ask myself that. I like to work with minority groups in society and be inspired by them. I then actually want to make something together with or for them. Then I usually have a certain visual image of what I think is bold and what could possibly connect well with that group. But then again, I mustn’t be a person who thinks they know what’s best for a certain group from a single perspective.

I think you can never avoid getting comments. but I am perhaps still exploring myself where exactly I stand and what I stand for. In any case, I like my work to be inspired by something realistic – something I see in society – but I want to go a step further in that as an artist.

In your eyes, how do fashion, styling, and materials contribute to polyphony in the city?

Like many people, I see fashion as an extension of your identity. Many people have an average, fast-fashion look, and I find that I always like to look for the boundaries in my workshops – or in what I create in general. The nice thing about the workshop I’m giving now is that when I start taking pictures of people, I seem to be very enthusiastic myself. I’d make sure that the participants suddenly put on a pair of crazy glasses, for example, or another piece of cool jewelry that they would never have worn in the first place. In any case, if it makes them feel good about themselves, it confirms how strongly clothing can influence how you feel. The other day, a guy came in wearing a tracksuit, but then he started putting on pearls and even wanted to put clips in his hair. It seemed like he suddenly felt completely free in how he could look. In fact, he never wanted to take it off again! That is really nice, that you can give someone that feeling of freedom and express it in clothing.

For women or girls, it is more natural to have a dress-up party. Before they go out or do something, they usually get a little dolled up. I think men in general just don’t have that so I think it’s really nice to see a difference in that pattern.