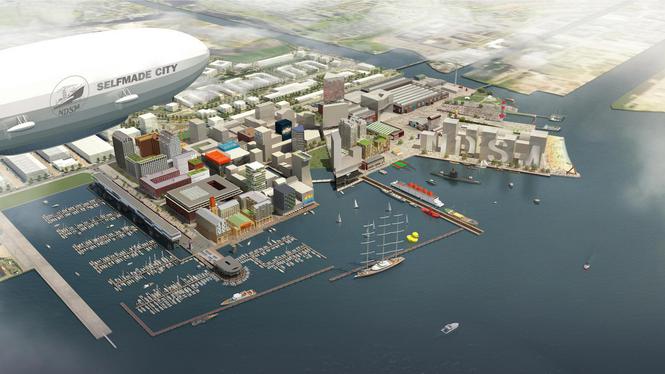 With all the new building planned, the NDSM site is going to change radically. But director Kim Tuin wants to retain its free character at all costs. “There is more value here than just the price per square metre.” Starting this summer, seven hundred new homes will be built at the NDSM-werf. The first phase will consist of 245 homes right where the ferry docks. There will also be a car park and there are plans for another three hundred homes on the quayside by the ferry by 2025.

“An area in transition,” Kim Tuin – director of the NDSM-werf foundation – concludes. The building frenzy will have consequences for what activities are possible at the NDSM site. In terms of noise levels, for example. “The festivals we hold here, for example. With all these people living here, that will be complicated. That’s already the case with the ferry jetty on the other side. And the Buiksloterham community is getting closer all the time.”

Hip location
The NDSM-werf has been a creative hothouse since the 1990s, when it was transformed after having served as a shipbuilding wharf for decades. In recent years, the NDSM site has increasingly become a hip location for festivals and other creative events.

Tuin believes that the site’s character as a free space must be retained. “When giant tankers were being built here in the old days, this dominated the feel of the place. Then, when they were finished, they left an empty space.

Festivals have the same effect. Everything is set up and the taken down again within the space of a week. Which means there’s always something going on here. NDSM has a way of being, of breathing, that no other place in the city has.”

Sexyland
Tuin took up the position of director of the NDSM-werf foundation in 2015 and since then has supervised what goes on at an outdoor site the size of 38 football pitches. Her plans for this space have found support. Amsterdam’s city plan ‘Koers 2025’ (‘Towards 2025’) states that by the year 2025 approximately 1,300 homes will have been built at the NDSM-werf. The foundation is assured of a subsidy of 300,000 Euros per year until 2020, provided through the Amsterdam Fund for the Arts. “Myself and we as a foundation now have four years to prove ourselves.”

The NDSM is and must continue to be “the rugged, unruly sister of Museumplein square”, according to Tuin. To this end, she intends to plot a more artistic course in the years ahead, entering into cooperations with the Stedelijk Museum and the EYE film institute, among others. She also wishes to make the site more accessible. “We have a lot of studios here, but visitors don’t really notice these. We aim to make the processes of making things here more visible.”

One example of this is the recently opened Sexyland, an art project in which 365 makers each programme one day in an old canteen close to the ferry. You can buy a membership for 2.50 Euros, giving you admission every day for a whole week.

Cherishing our unique character
“As a foundation, we are a tool of gentrification,” Tuin says. “But I also want to contribute to the thought processes of those who are developing the area. The moment a city is completely built up and everything is finished, that’s when you lose your creativity. Value is more than the price per square metre. I am not campaigning against the building of homes, but we should cherish specific areas with a unique character.”

Will this still be possible once the residential areas have been built? “It’s our mission to bring the unique status of this area to the attention of policymakers. The number of people living in Noord is set to increase enormously over the next few years. Given this, I think a place like this will be even more valuable. There has to be space for permanent temporariness.”

Creative at NDSM
The current NDSM site (NDSM stands for Nederlandsche Dok en Scheepsbouw Maatschappij, or Netherlands Docks and Shipbuilding Company) has been in existence since the 1920s, when it was taken into use as the shipyard at Oostenburg had become too small. Initially, the yard built passenger and cargo ships; from 1946, these were joined by mammoth tankers. It was also in this year that the site became known as NDSM.

In 1984, the shipyard went bankrupt after years of changing economic times, mergers and reorganisations. Within a few years, more and more artists and creatives started taking up residence on the vast site.

In the years ahead, the NDSM site will once again take on an increasingly residential character. Amsterdam’s ‘Koers 2025’ (‘Towards 2025’) city plan calls for some 1,300 homes to be built at the NDSM-werf by the year 2025.