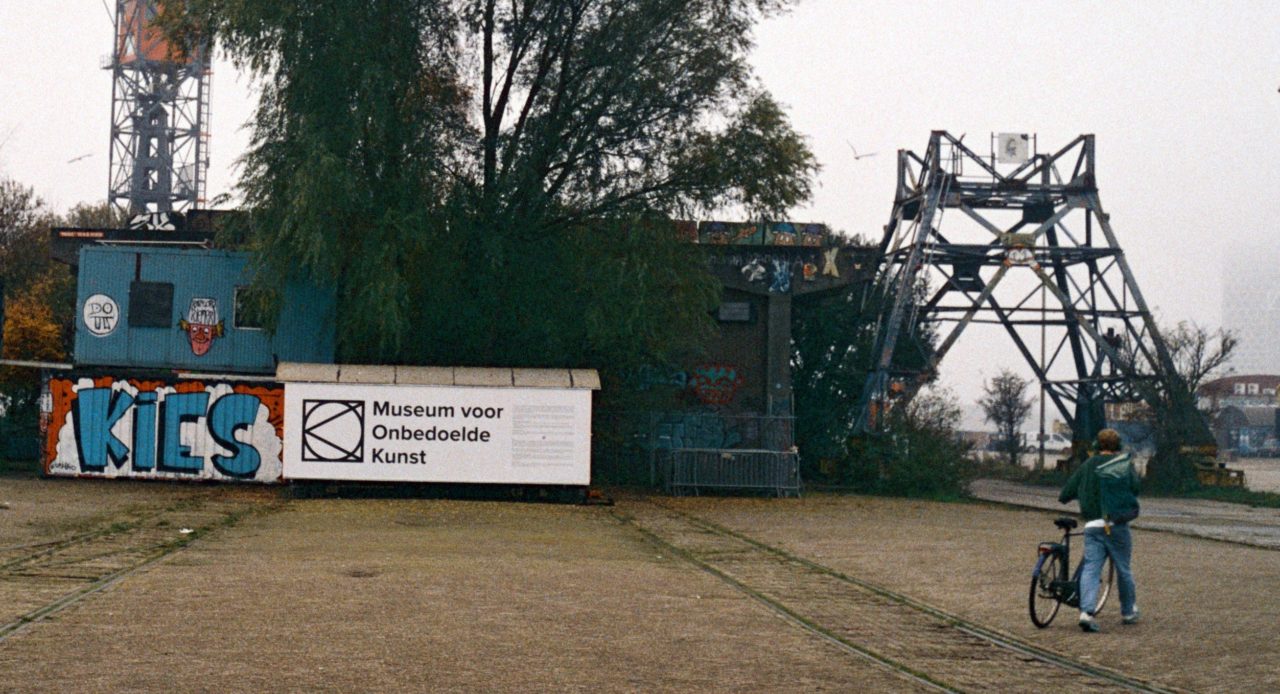 In early November, the Museum of Unintentional Art (Museum voor Onbedoelde Kunst in Dutch, or MOK) kicked off at NDSM, but the festive opening they initially had in mind had to be postponed due to corona. Nevertheless, the MOK has enriched NDSM with a playful and imaginative art intervention.

What exactly is the Museum of Unintentional Art? And what is unintentional art in the first place? These questions can best be answered by visiting the various works yourself at the NDSM wharf, where the MOK, after Westerpark, Sydney and De Veluwe, has now arrived with its fourth exhibition. When viewing a MOK exhibition, you soon learn that art can be anywhere. Whether it’s a tree, a concrete slab or a steel crane, the works of MOK are objects that have often merged into the background of the NDSM site since decades. The MOK simply turns them into art: with a caption, a background story and an imaginary artist. In this way, an old transport container suddenly turns – à la Duchamp – into a true museum piece.

In 2020 the MOK won the annual Open Call of Stichting NDSM-werf: a call for artistic initiatives to visualize a future use of public space, in whatever shape or form. MOK achieves this by adding a fictitious human layer to the material context of the shipyard. The art histories invented for the various objects are professionally made, compelling and poetic, contributing to an authentic museum experience. At the same time, the stories are often playful and absurdist, and this is precisely what emphasizes the humorous undertone used by MOK. Finding unintentional art is not a serious matter; it is a game that can be played anywhere and anytime.

On November 11th, Gilad Bino Jr. Walvis, director of MOK, took listeners of NPO Radio 4 on an audio tour past some of the works. He is quick to assure us that the MOK has the largest museum surface in the world. This sounds like an ambitious statement, but can no longer be denied after Walvis explains the main idea behind the MOK once again: this museum ‘elevates everyday or everyday objects to art by giving them a title’. An audio tour (available for free on the IZI.travel app or website on your smartphone) takes you past seventeen objects on the wharf and presents the fictional artists that are behind these ‘unintentional’ artworks. At the same time, this exhibition invites you to keep on discovering art in everyday environments after your visit. In other words: the MOK starts at NDSM, but doesn’t really end anywhere. 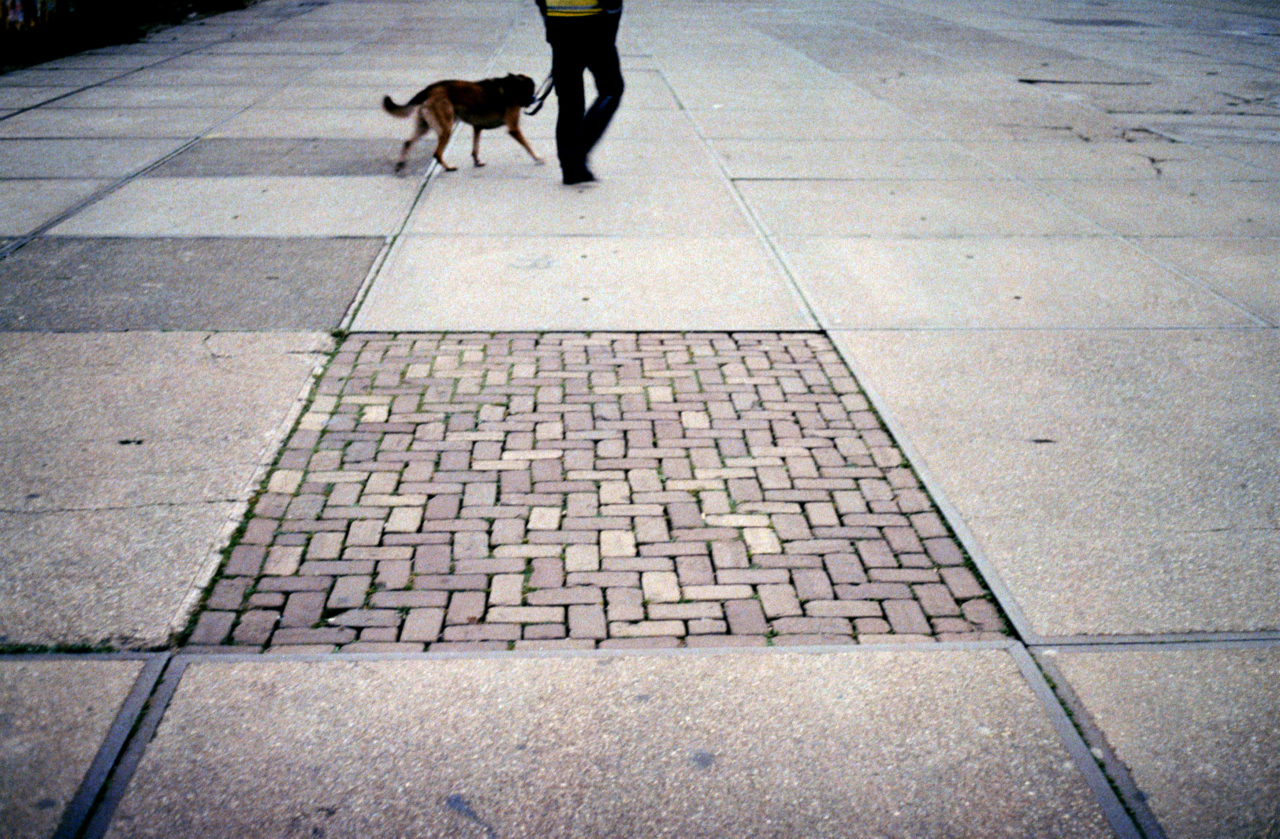 The visitors centre of the MOK is located in a central location on the NDSM wharf, under the trees, directly opposite the blue entrance of the NDSM warehouse; an appropriate point of departure from which to start taking your footsteps as well as your thoughts in all directions. It becomes clear from the very first artwork that you and you alone decide the direction of your walk along the MOK. A number of outdated iron rails for the transport of goods, rusted between concrete bricks and rebellious grass tubers, are presented as Duality, an artwork realized by a certain Magdalena Loman. The audio fragment refers to the way in which the rails split into two tracks and thus pose the question: do you follow the right or the left track? Is there a right or wrong choice, and does it make any difference at all?

Unintentional art can be found not only in the everyday world of the present, but also in that of the past. An old steel construction (the foot of a crane) next to the X-slope changes in the stories of the MOK into a legendary work of art that became popularly known at the end of the 1970s as the shipyard’s ‘Twijfeltower”. With respect to the innumerable concrete slabs that form the surface of NDSM, which people have been unsuspectingly walking on for decades, the MOK tells us that this has been assembled as BOX, a work of art by Franka Martinez, which reflects on the inevitable human tendency to think in categories or boxes. In the same way, MOK has transformed many other objects – which might normally go unnoticed – into visual stories. 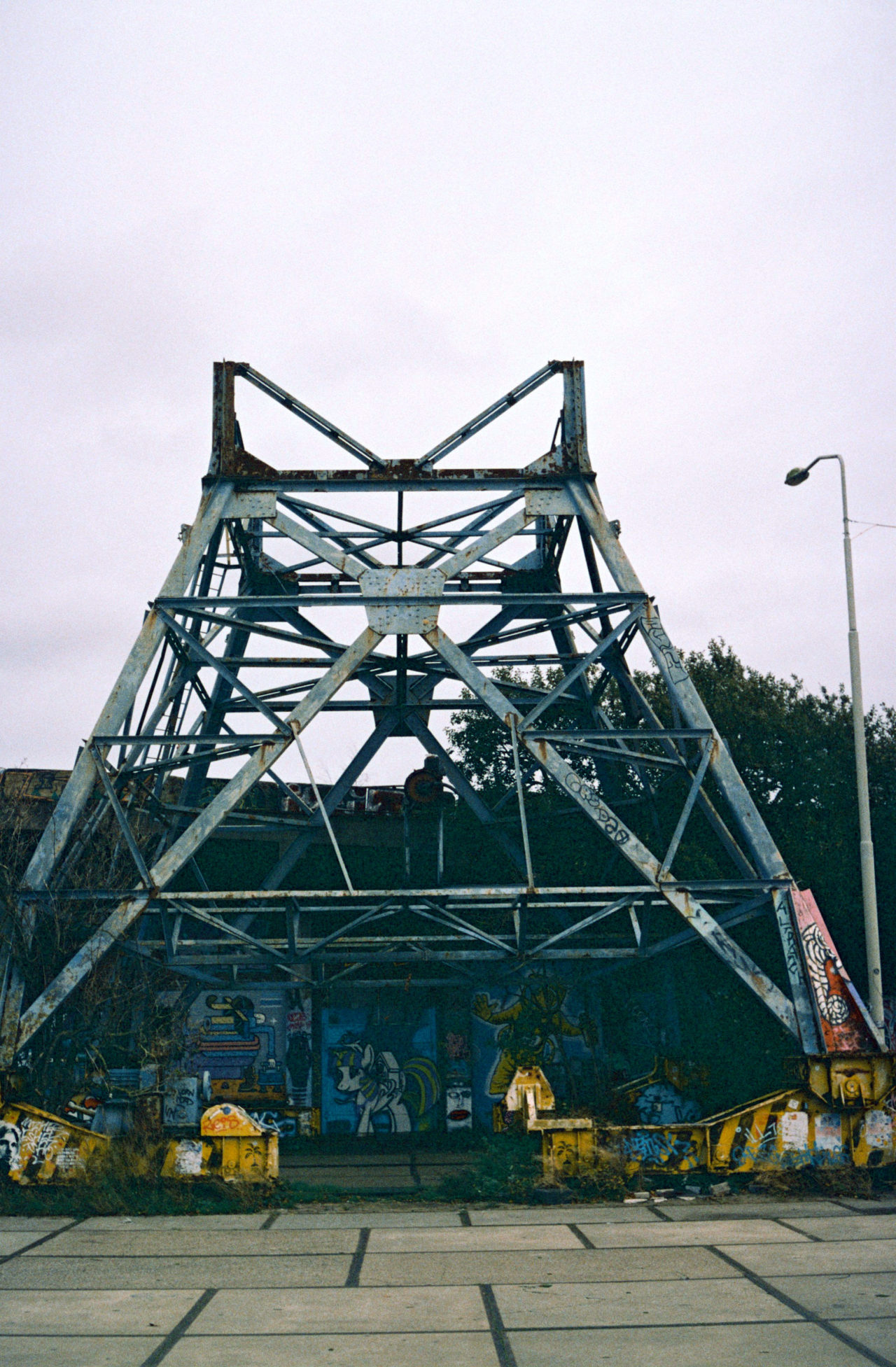 Especially in times of corona, the arrival of the MOK seems more appropriate than ever. Our constant pursuit of sensation – in the form of far travels and large-scale events – has been temporarily halted in 2020. This has forced (but also inspired) many of us to instead find this sense of wonder in our daily proximity: from that one slightly sagging facade across the street to the books in your shelf that over the years have caught more dust than eyes. What many people have discovered is the abundance of knowledge, entertainment and inspiration that can be found in our own living room. It’s always there, as long as you take the time to look for it.

But after more than eight months of pandemic, the inspiration offered by our living room starts to run out. However, this is no reason to stop this exercise (of finding wonder in the everyday) but to keep experimenting with it and take it outside. This is exactly the idea which the MOK takes as its foundation. The audio tour gives you the first push and helps you, by casting a different look, to see each object as a carefully curated work of art. With its raw urban character, the NDSM wharf – with all its curiosities of concrete and steel, with the walls of the welding shed that many street artists spray over and over again as an endless canvas – is an ideal place for the MOK to unleash its alternative stories. Anyone who comes to learn about the philosophy of the MOK and manages to embraces it doesn’t have to worry about another year of covid restrictions. With a good portion of unintentional art at NDSM, you’ll surely keep entertained!