A new, small but very fine beer paradise has emerged on the west side of the NDSM wharf. In the colorful co-working domain Loads Amsterdam, address Ms. Tarnweg 10, four super enthusiastic gentlemen (Jeroen Haselager, Sven Osterhoff, Niek Ros and Hein Teurlings) have decided to set up their brewery. What started as a birthday present and a fun hobby has since escalated into a booming business that is conquering Amsterdam and beyond. I went to the Rauw Brouwers to hear their story.

On a rainy blue monday I start cycling towards the brewery. The bright building of Loads Amsterdam sprayed with blue graffiti is hard to miss and provided a considerable contrast with the gray day, and that contrast did was not limited to the building’s facade. From the moment I stepped in, I was overwhelmed by the sheer enthusiasm of Jeroen and Sven, the two of the four Rauw Brouwers I spoke to about their brewery, so that the grayness of the day was quickly forgotten. While I take a seat at the bar, the brewers start to tell me the story of how they started.

“It was created by a convergence of several things,” begins Jeroen, “We originally came together because of our women. They all studied together, and if your wives / girlfriends get along well with each other, you will automatically meet the partners at social drinks and the like. That is how we met each other and we have grown into one large group of friends ever since. ”

“Every one of us already liked beer a lot.” A big grin appears on Jeroen’s face. “And then at one point Hein got a do-it-yourself beer brewing package for his birthday and we tried to make something of it on a random Wednesday evening. We completely underestimated what the process of brewing beer actually is: we worked until half past one at night for four liters of beer. But when we tasted it a few weeks later we thought wow, this actually tastes pretty good! ”

None of us knew how this worked, but we just started doing it by trying

After the first few brews, the gentlemen upgraded their tools and consistently brew beer together once every month. At the time, still at Hein’s home on a regular kitchen stove. They also joined other brewers to study the process. “At one point it became really crazy to do it at someone’s home, Hein’s wife got a bit tired of the mess it made.” Jeroen and Sven look at each other and chuckle, because she was right. “Then we went from garage box to garage box and eventually ended up here.”

After gaining some more experience in brewing and after testing the different flavors with friends and family, the Weissguy (a weizen beer) emerged as the winner. “Then we started to ‘rent brew’ for 500 liters, that was in 2019. Rent brewing means that we rent an existing brewery to be able to produce our own beer on a larger scale. During that time we also came up with the name Rauw Brouwers: it confirms our working method. We do what we want and do not like too much fuss, no quinoa seed or ginger junk or whatever. Just a nice drinkable beer that you open on a Friday afternoon after a week of hard work with your friends. Nice and accessible, but you can remember it, they are all beers that linger in your head. ”

How cool would it be if we could just be the friendly neighborhood brewer here?

And they certainly linger, in addition to the delicious flavors, also because of the catchy names that the versatile beers bear. My eye falls on the “Lul.Lul” and I ask Jeroen and Sven about this creation. “De Lul.Lul is a parody of the many 0.0 beers that you have been seeing lately,” says Sven, “We were just like: 0.0 is nice and all, but you also have to be able toyou can just sit down and have a good triple. That’s why we thought instead of a 0.0, a Lul.Lul triple of 8.5%. ” Sven and Jeroen also say that they choose different parties for the rental brewing and packaging process, in order to emphasize the versatility of their working method. “We put the bottles to one party and the cans to another. For example, we made our first canned beer, the NEIPAard (a New England IPA, NEIPA ed.) together with a fellow brewer from Amsterdam. ”

The brewery really started to grow in 2019 and at the end of that year it was decided to enter the Amsterdam hospitality industry and to conquer the terraces. But unfortunately we all know what happened next. “We really wanted to start expanding at the beginning of 2020,” says Jeroen, “Of course that went completely different, but because we were not used to how it was before, we could also switch very easily. The hospitality industry is not available? Then we go to the liquor stores and beer shops. That is why we were able to grow so fast, also because of the lockdowns. ” Jeroen looks at Sven for a moment, who nods affirmatively. “None of us knew how this worked, but we just started doing it by trying. That mentality, not being afraid of risks and of making mistakes, that has really worked. “ 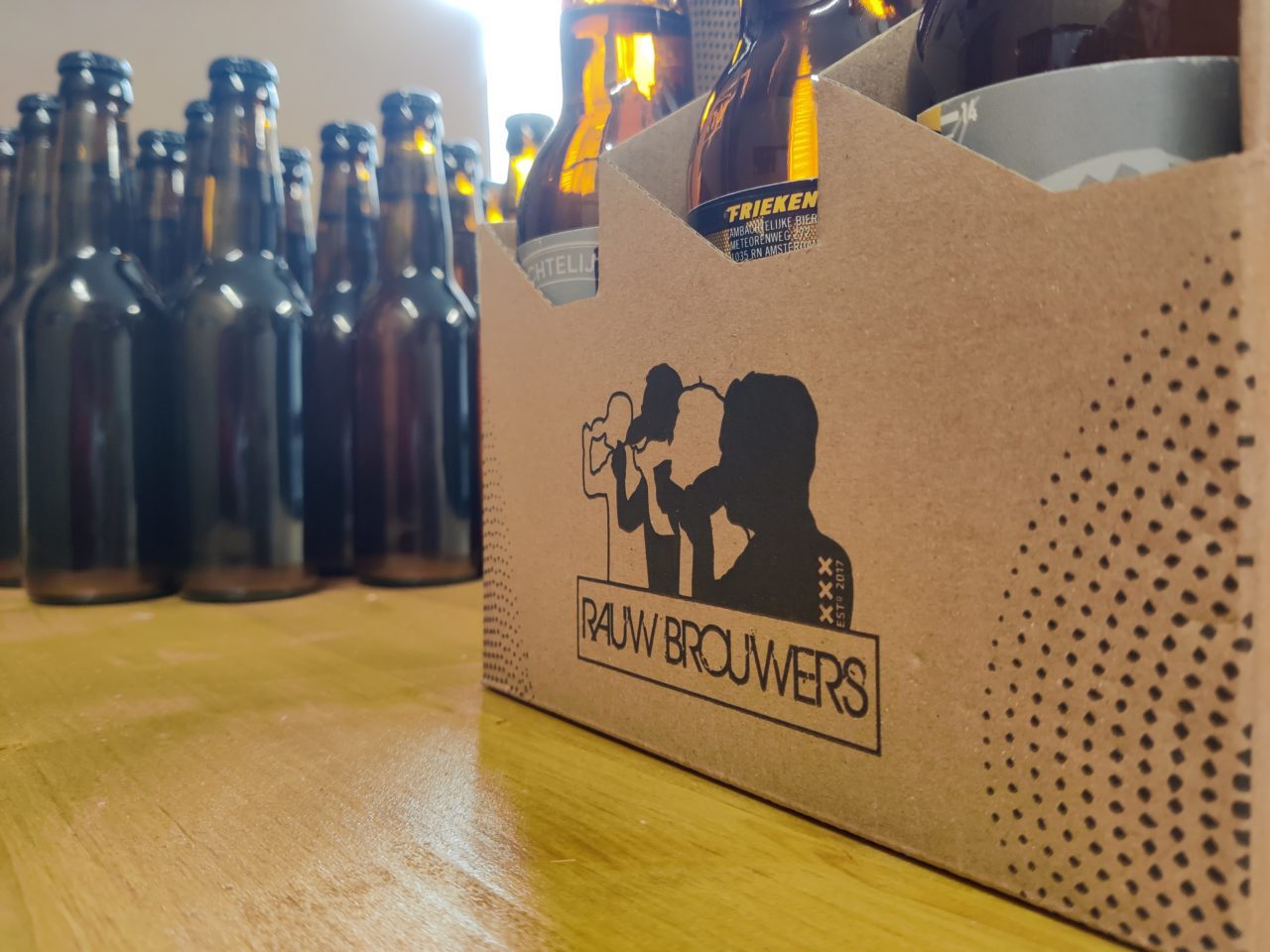 That the Rauw Brouwers like to persevere is evident in everything. The brewery is now working hard to turn the space into a real meeting place for the community. For example, they are now working to transform the courtyard at Loads into a co-working beer garden with terrace. “We think it would be very nice to be able to really contribute something to the NDSM wharf,” Jeroen continues, “the concept of the wharf just fits so well with what we stand for. It is almost a one-on-one match with what we want to radiate. Hopefully when the whole corona era is over, we can also do a bit more here, for example give a workshop or a tasting. How cool would it be if we could just be the friendly neighborhood brewer here? ”

In the meantime, the Rauw Brouwers are brewing happily on, and are as-we-speak working on two new beers in the brewery. A slow but rewarding process according to the brewers. Did you get thirsty while reading this in the meantime? In addition to renowned liquor stores throughout Amsterdam, you can also order beer directly via the Rauw Brouwers webshop. These are then delivered corona-proof by the gentlemen themselves in Amsterdam and Weesp. You can also visit the Rauw Brouwers, every fourth Saturday of the month you can stop by for a beer to go. They are also often present on other days, so feel free to knock on the door and if you are lucky you can also take a look inside the brewery!