Luca Boscardin, one of the winners of the NDSM Open Call of 2021, is launching his work Animal Factory on the wharf. The installation consists of several, minimalistic metal animals in real-life size that will be roaming the wharf for the coming months. We spoke to Luca about his work and artistry at NDSM.

I met with Luca in his studio at the Art City in the NDSM Loods. After I worked my way through the labyrinth of studios and workspaces, I arrived at a spacious room decorated with several toys of Luca’s making. It makes for a very colorful and playful environment which lifts the mood instantly. After a swift catch-up, as we had already met before for some pictures, we sat down at a big table in the studio and began the interview.

So, Luca, can you tell me a little more about yourself and  your artistry?

“Of course! I am originally from a very small town in the Northern part of Italy. There, I decided to study architecture in Venice. However, after I graduated, I realized that as much as I love architecture, I am not able to put any of Luca in the designs of buildings, parks or other big scale things. I was not able to express myself in designing on such a big scale. Therefore, I decided to do a master’s degree in graphic design, in an attempt to reduce the scale in which I design. The interesting thing is, in everything that has to do with design, the process is the same, but the outcome is going to be different. I was able to use the same skills that I had learned in architecture and applied it to graphic design.

“Even though I really liked graphic design and playing with colors and graphic elements, I felt that my heart was not really beating for the work. That was the moment I decided to move to Amsterdam. When I arrived, I came across a beautiful studio where designs were made for toys for children. As soon as I saw it, I was mesmerized. There are people that actually do this work, it is not just a hobby but a proper career! Consequently, I dived into it and completely fell in love with this work, it is something exceptionally beautiful. So, my art started with architecture, but let’s say that in toy designing I found a way to best express myself. I learned the hard skills of design by studying architecture and graphic design and found out how to put love in my work by creating toys.” 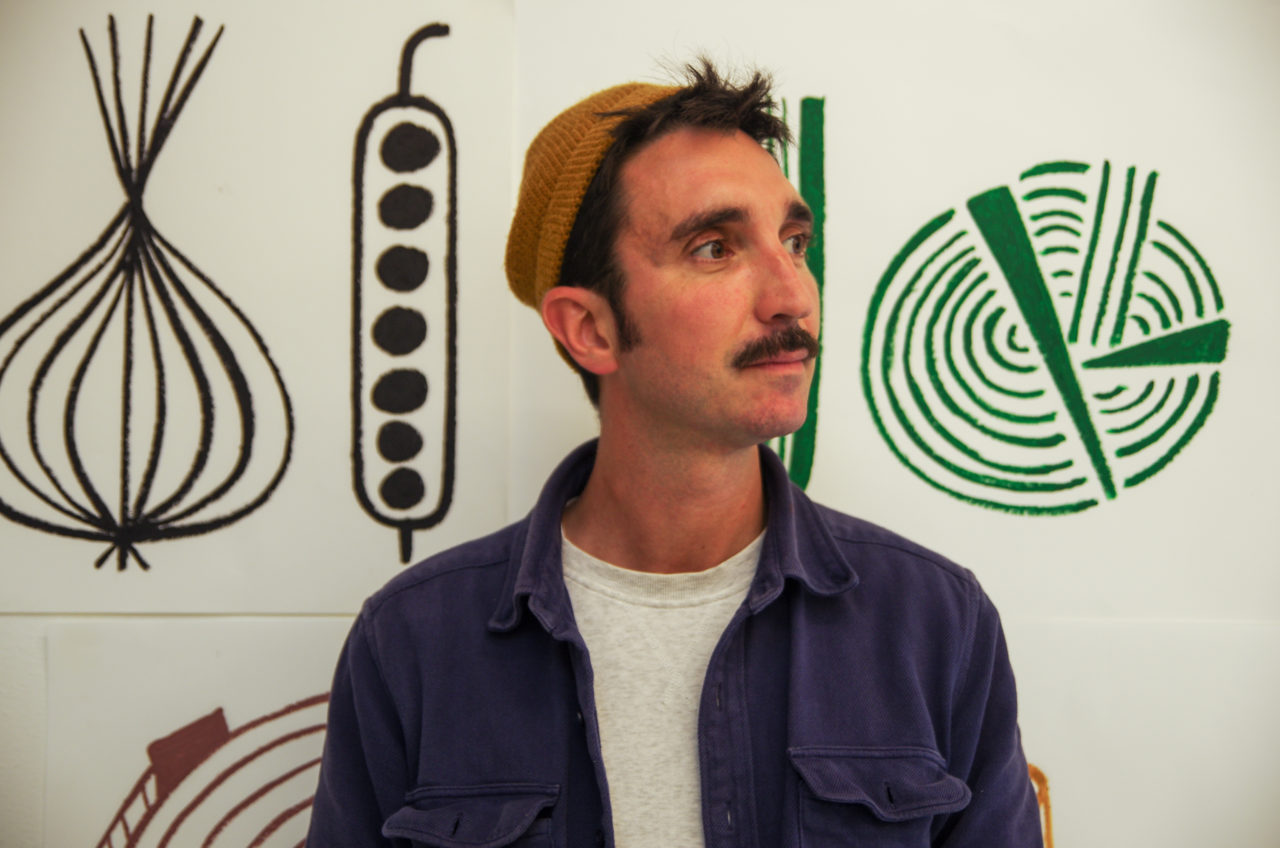 “The toys that I design are not objects that you just look at, they are all objects that you can play with. Playing for me means learning, and learning is discovering something that you don’t know yet. That is also what I do with my toys, I don’t give the customer, the kids, an already made toy, they need the action of playing in order for the toy to be finished. That is why architecture was really important, because it gave me a lot of rules and a grid which I can use in my toy making. A strong design makes a toy free and easy to play with. With all of my toys, I try them out during workshops with children. It’s a beautiful thing to see how kids play with your toys and that they actually work. Kids are also brutally honest, so they will ask you very direct questions if something is unclear to them.”

“The idea started out of the concept of simplicity, like almost everything I make. I bought oil-based pasta crayons, which are made from a type of pasta that can be used for a really rough way of drawing, with thick lines you can’t erase. With these crayons I did an exercise of drawing things made out of only one line. I was trying to work and play in the same way that kids would work and play. When doing this you discover the key features of animals, the long neck makes it a giraffe and a few stripes makes it a zebra. I started designing in that context on a sheet of paper and realized that a lot of animals were coming out of my pencil.”

“Somehow, I was also fascinated to go big and wild with this project. So, for this design, I did try to imagine it on a bigger scale, something to play on instead of something to play with. Then I had this thought: what if they can actually be in the proportions of the real animals they represent? Imagine cycling around the city and out of the blue you find a crocodile in the park, or a giraffe just around the corner of a building. At the time I was playing with this idea, we were in another lockdown and you would hear on the news how wild animals were spotted in city streets because it was so quiet there at night. This gave an extra layer to this idea of wild animals in the city.”

“The simplicity of the design of the lines on paper is linked to the design process and the way the animals are built. They will be made out of steel tubes, wielded by a steelsmith at NDSM, as simple as the lines on paper are drawn, nothing more, nothing less. I always think that when you arrive at a point in your design where you cannot take anything else away without the product losing its functionality, you are close to a good product.”

Animal Factory is going beyond being just a to

With Animal Factory, every line counts, because every line defines some part of the animal and every line also counts for the stability of the animal. In that simplicity lies a certain beauty. Because of their simple design, the animals provide the freedom to have multiple ways of use or interpretation. For example, I can imagine children playing on them, but I can also see a group of teenagers just hanging around them or someone else using them in their workout. We all want and need to exercise our creativity, play around and think about something fantastic and crazy once in a while. We need that in our lives, I think.”

Can you tell me more about the collaboration with Iwan Snel, the wielder who made the animals?

“Yes, that is actually quite an interesting story. One of the great things about NDSM is that you can find a lot of different types of people. That is part of the privilege to work here. One day, I just knocked on Iwan’s door and asked if he wanted to be part of this project. He loved the idea of the animals and decided to jump in. It’s really beautiful how sometimes a nice idea or project is linking very different people together.”

“I love the contrast between us. I am a small Italian guy, really chaotic and loud, while he is a more silent, big Dutch Nordic man working in this atelier full of steel, iron and tools. But even though we may seem very different, we were a great match from the beginning. What is really great to see is that, as a designer, I am free in my ignorance to draw whatever I want without having the knowledge of what is actually possible, material-wise. In turn, he knows the machines and the tools, their capacity and limits and the technology necessary to accomplish the structures. This creates a nice balance, because I can go wild in my design, unlimited by practicalities, and he can then tell me the limits of what is possible, which creates a kind of golden middle ground. That’s why I think a project is strong when it is fueled by different people with different expertise. Since there are so many different people here at NDSM with so many different skills, it becomes a perfect playground for great projects.”

“In addition to illustrating and designing toys for children, I also create and design icons for a big tech company. It seems really far from the work you see here in my studio, but in reality they are quite the same. Icons are small illustrations which have to be really clear, simple and direct but at the same time universal. Everybody has to be able to understand what that symbol means instantaneously. Somehow, the world of children works in the same way, for example, every child knows that a white building with a red cross represents a hospital, it’s iconic. When I draw or design icons for this tech company, I often look at the world of children to be able to simplify and to be bold. The target is thus very different while designing icons than when designing toys for children, but the language they speak is the same. This way of applying simple design in order to be iconic and bold can also be seen in the design of the animals of Animal Factory.” 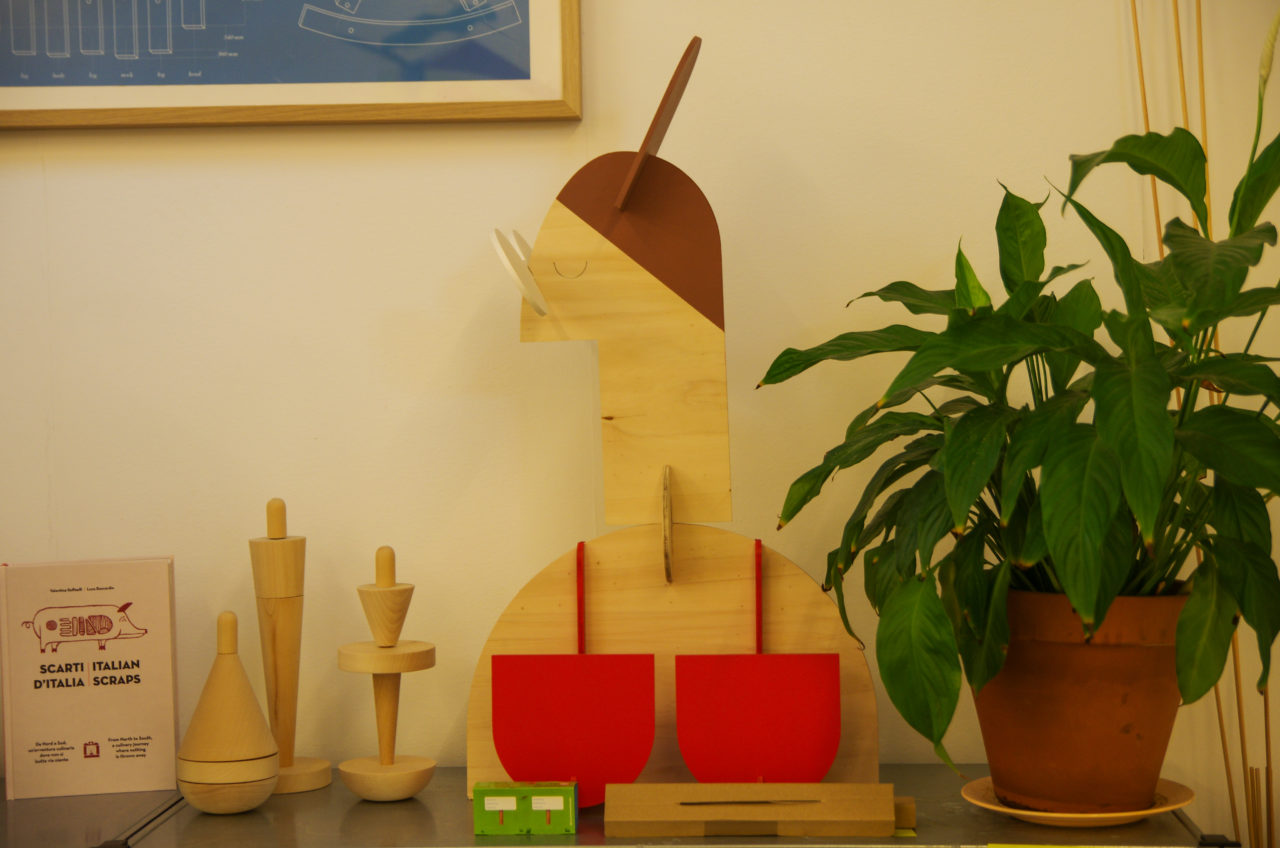 Can you also tell us a little more about why you chose to send in Animal Factory for the NDSM Open Call?

“Animal Factory is going beyond being just a toy. It is definitely a challenge for me in terms of design and the use of materials. I feel like I am also playing while in the process of designing and making it. Additionally, I think NDSM is a perfect place for this kind of project. Here, luckily, there is still a bit of beautiful chaos, and mess. There is room to improvise and to be surprised. That’s why I think finding a giraffe on the NDSM-wharf is crazy, but also at the same time somehow normal. It’s a beautiful place filled with energy and creativity where a lot of great ideas start. Imagining that the animals will actually roam the streets of NDSM and that children and other people are actually going to be playing and interacting with them, is a beautiful idea to me. Because of the simple design, I think that the family of four animals we have now can easily grow in the future. Perhaps they can also migrate to other parts of the city, or to other cities in general. The animals started here in this studio just on a piece of paper. Now we are building them in a steel atelier and they are going to be on NDSM for the next few months. But I am sure they are going to other places as well. Somehow, they are alive and will go on their own way.”

The animals of Animal Factory can be seen from the 19th of august on the NDSM wharf and everybody is welcome to play, chill, work out, or just hang around them! I highly recommend visiting Luca’s studio or website, as looking at his designs is a true mood-booster! Check out his website below