This winter, Stichting NDSM-werf presents (Come To) Light, an exhibition consisting of three light works by international artists. With their works, they shed light – both literally and figuratively – on topics and persons that are important to them. Who or what should be visible in the spotlights of public space? In this edition, we speak with Alice Wong and Crys Leung. Anyone who recently strolled around NDSM might already have passed by their new project without even noticing it: Cohesion is too large to fully take in with a single glance.

How did this project start for you?

Alice (A): Last August, we received the request to contribute to this outdoor exhibition. At the time, we were spending our summer holiday together. We had never done any outdoor projects before, but we decided: “Why not?” This is the seventh project we are working on together, and we were excited to challenge ourselves with something new.

It’s always fascinating to work with a new medium. I (Alice, red.) call myself a ‘story-designer’: I like to anchor narratives themselves, and for this, it works well to use different media. If a particular story is best told in a podcast, then I’ll create a podcast. If it needs to be shown with a chair, then I’ll push myself to make a chair. If it has to be a circle, then we’ll make a circle. 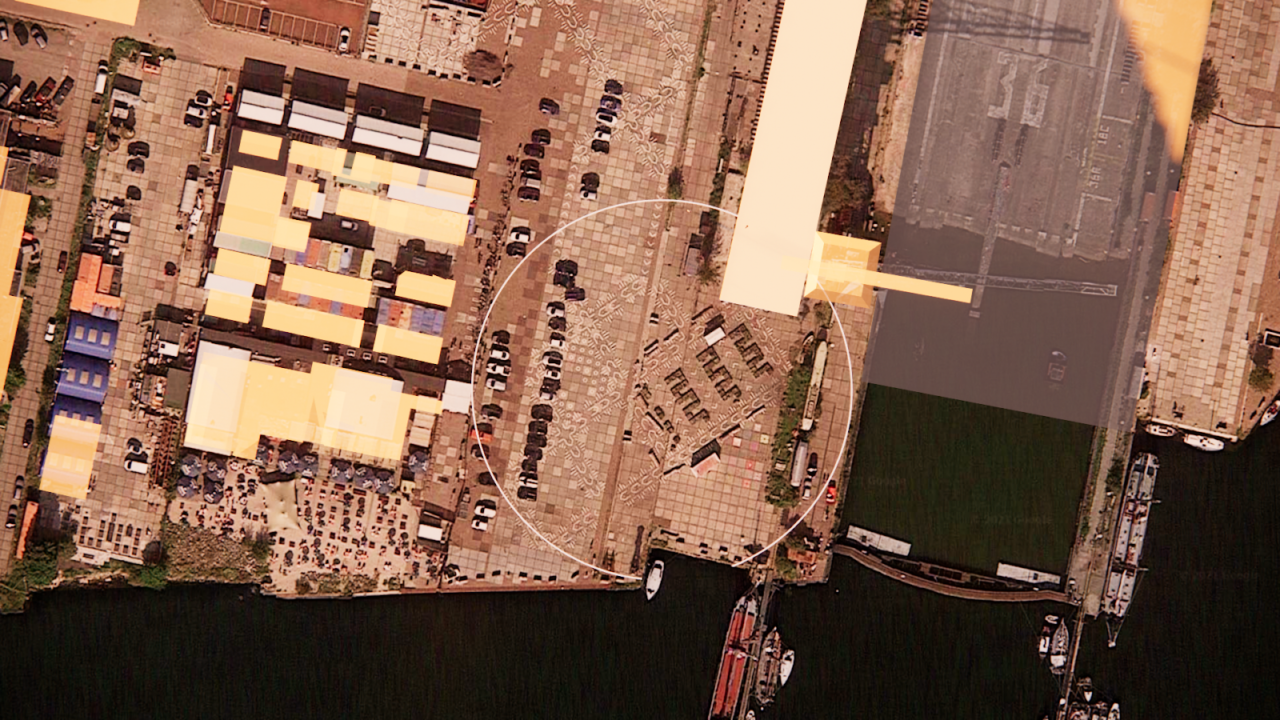 A render of 'Cohesion' in its full size. Credit: Huey Hoong

We like the open-mindedness! How did this then turn into a concrete idea?

Crys (C): We had to think deeply about how to best create an art piece for public space. We wanted to do something not too techy with lots of wires and cables.

A: We also turned to the text explaining (Come To) Light: it spoke about inclusivity, visibility, bringing people together, about what’s seen and unseen. Then we spent a few days sitting in a café, thinking about this and the context of NDSM. We agreed that this is a place where lots of things happen, but also a place that people call home. For many people – from migrants to artists – NDSM has been some sort of port. So what histories does it have, how to bring them together, and what should become visible here after this pandemic? This is when we decided to call the project Cohesion.

When you stand next to it, you can’t see exactly what it is

C: It was not an option to use high-end technology, like cables, programming, tv-screens, or anything else susceptible to damage.

A: We wanted to create something analog, which as a medium still tackles the concept of bringing people together. At one point, we were looking at the map of NDSM, and wondered: “Why not put a big circle there?” The first idea was to create a huge shape, almost a kilometer wide, covering the slopes and different buildings like the Hilton hotel. That was a bit of our masculine ego speaking; we wanted to do something really big, and paint all over the walls.

C: Then, reality confronted us. We couldn’t just complete an artwork covering so many spots, so we shrank the circle. We considered glow-in-the-dark paint, thermoreactive material, or something that would invite people to touch the work. 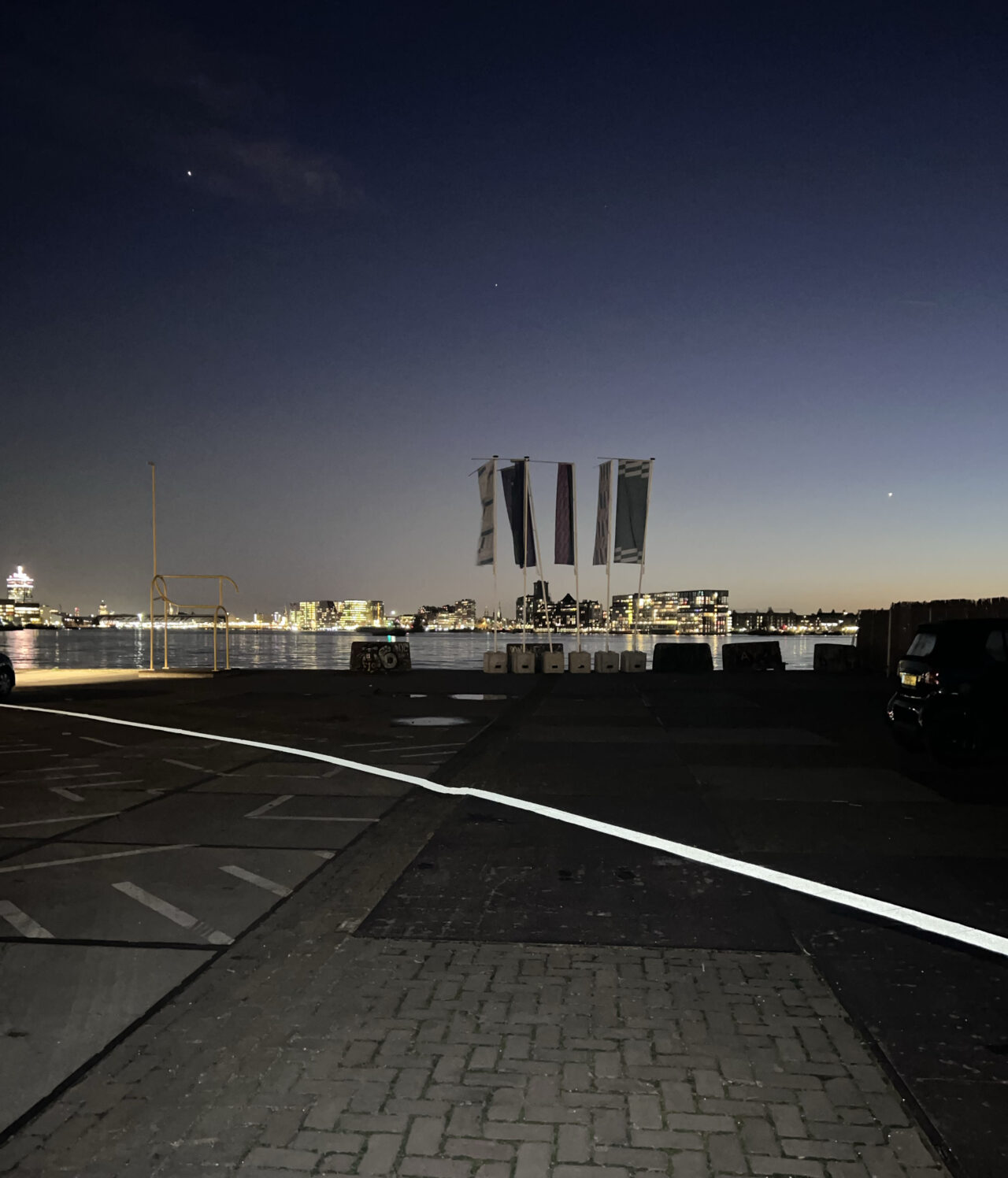 So the goal was to keep it analog yet interactive?

A: Yes, it had to surprise people and make them wonder: “What is this about?” We wanted to create something light-reflective.

C: Then we spent a lot of time on material research, which was a big part of this project. We contacted suppliers in many different countries just to find material that can withstand the wind, rain, and temperatures outside. This turned out to be 3M Stamark road marking tape.

A: We needed a lot of help from different friends. Creating the proposal, writing out the concept, rendering the material inventory; it all took a lot of mathematics. Without all these people’s help, we could not have created this circle.

C: And since the project is named Cohesion, this brings yet another level of meaning to it.

Can you tell us a bit more about what Cohesion is meant to symbolize?

A: We created a circle with a size too large for one’s personal perception – that’s really the key element. When you stand next to it, you can’t really see exactly what it is. A line? A circle? Am I inside or outside of it? We want people to ask these kinds of questions and attach different meanings to it.

We can’t truly judge the things we see unless we look at them from different perspectives and get the full picture. Especially nowadays, everyone holds on to different information, assuming what we know is the correct version. But we seldom consider that one viewpoint is not always better than another – it’s often just what we’ve been fed or made to believe. Together, all these perspectives contribute to our reality, and that is what the circle is meant to symbolize. On top of that, by placing it in this specific spot, we made it a reminder that, despite our differences, we should still come together in physical space.

The work already brought people together, even when it wasn’t there yet

How did people respond to your work?

C: People react to it in different ways. Sometimes, they will come and talk to us. But today, people also started parking their cars according to the line, which they are more likely to do when we do not increase the thickness of the lines. That way it aligns with their perception of a “real” road infographic. And when sweeping the ground before we could attach the road marking tape, we got complimented by some police officers for doing a good job keeping the area clean.

A: All these public reactions and incidents made us realize that, even though we have created the whole circle, it is impossible even for us to see the whole picture and the different ways of relating to it.

What’s it like for you to display your work in public space? What do you find valuable or important about this?

C: This is the first time we did a project in public space, and also the first time talking to so many different people throughout the process. Since we’re doing something with the surface people are walking on, we needed everyone to cooperate. At some point, there was a car standing in the way, and we had no choice but to go and find this person. After all, it’s difficult to continue drawing a circle when you leave a gap and the lines are not connected anymore.

Would you like to work in public space again?

C: We could do it again, but maybe at a smaller scale. In the future, we will also consider more external factors, such as weather conditions.

A: Working in public space automatically means working with lots of different people, which requires commitment on all ends. This can be challenging, but it also brings cohesion.

By doing this project and talking to many people, we also became a part of this area ourselves. And our recognizable, bright-green suits also helped with this. The process itself almost became a performance in itself. It’s not like people will wake up on a Monday morning, and the work will suddenly be there. As we were working on it, running around, enlarging the circle piece-by-piece, people started questioning it. So that’s another layer: the work already brought people together, even when it wasn’t there yet.

C: Sometimes though, we couldn’t continue chatting to people; we don’t have all day, and the project needs finishing! This is the conclusion we got to last week: the circle is the outcome, but cohesion is the process.

The exhibition (Come To) Light is free to visit at NDSM, with different running dates for each of the works. Check out the other artworks, artists, and respective timetables (when the lights are switched on) via the button below.