NDSM’s curator Petra Heck, interviewed Swiss artist Annaïk Lou Pitteloud, artistic creator of the Neo-Logo’s, which are on display at NDSM, and already have become iconic for the terrain. 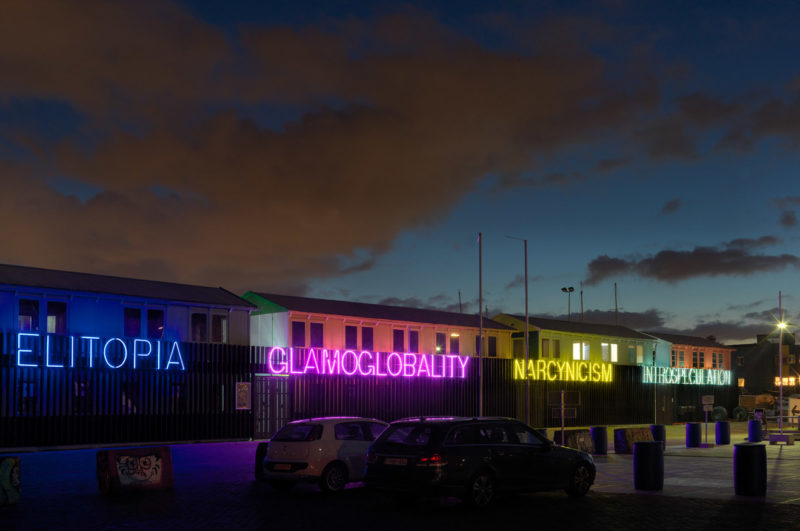 Annaïk Lou Pitteloud (1980) grew up in Lausanne, in the French-speaking part of Switzerland, in a very politically committed family. Her mother was a specialized educator for people with disabilities and had a political career as a national councillor for the Swiss Socialist Party. As a result of these activities, her father played a very important role in the upbringing of Annaïk and her brother and sister, by being most present at home, while at the same time pursuing his own career as a forensic photographer at the Lausanne Forensic Institute. Pittelouds brother is a historian specialized in environmental and social conflicts from the Meji era in Japan and her sister is a filmmaker.

Petra Heck: Can you elaborate a bit about your practice and recurring thematic in your works?

Annaïk Lou Pitteloud: My work makes use of different media to direct the viewer’s gaze towards invisible elements of image construction, institutional space or creation itself. I generally use rather stripped-down language to ask critical questions related to social issues, while questioning the mechanisms of the art world, its codes of perception, transmission and presentation.

PH: Your work Neo-Logos has been installed at the NDSM-wharf since September 2019. Can you tell us a bit more about the concept of this work and the travel that this piece has been doing?

ALP: This piece was first developed as a series of small neon lights, the longest one being 120cm long. Katerina Gregos’ invitation to take part in the Riga Biennale in 2017, as well as her proposal to extend this series, are the reasons for the version that has been on show in Amsterdam for the past year.

These neologisms have the status of logos as well as mottos, therefore enlarging them seemed appropriate to me; they function as a brand that adapts to where it is placed.

This set of four neologisms are shaped in Helvetica, a Swiss typeface developed in the late 50s. It was designed to be neutral and have great clarity, to carry no intrinsic meaning in its form, and to be used on a wide variety of signage. These criteria made the success of the font, which is one of the most used in the world.

Lit in Cyan, Magenta, Yellow and Black, this neon series appropriates the colour spectrum known as CMYK, a colorimetric system used for printing which relates to the idea of mass diffusion. Colours have always been associated with symbolic meanings: blue suits the aristocracy, red is linked to honour as well as to danger, while yellow speaks of infamy or treachery, and black refers to renouncement and death.

In this new vocabulary, the elite become a utopia. The -topos, a location, paradisiacal and unknown on the one hand, but on the other a rhetorical arsenal for the speaker in need of adhesion to establish the happy-few as an argument for a ‘raison d’être’.

Globalism is set as a trend and the jet-set is an attitude that allows seeing class tourism as a world vision.

The egotistical self employs cynicism as a philosophy to legitimise the individual benefit above any type of solidarity.

And finally, this self becomes an asset to speculate on, allowing any introspection to be seen as a potential of profiling and profit. One is the best salesman of oneself in a web configured by competition.

These terms have not entered a dictionary yet but nevertheless try to describe the ambiance of the epoch with accuracy. They brand an atmosphere not only specific to the art world but also to the broader contexts of politics and economy. Moreover, they address the speculations of the artist as a producer and the expectations of the viewer as a co-producer of the artwork, when every action or production is analysed in terms of marketing.

PH: This piece is here now, and we almost see it as a mantra to us: that these words are not becoming a reality here at the wharf, that it should be about collective values, not about individualism and egocentrism and that it should not become an elitopia!

ALP: It is indeed always interesting to read a work in relation to the context in which it is shown, and in the case of the NDSM it is certainly emblematic!

Placed there, this piece can talk about the transformation of popular and/or traditionally working urban spaces into a lounge for rich jet setters, trend setters and other cultural managers. This trend towards gentrification carries with it a philosophy that sees the world in terms of qualification and quantification in order to give in- and outputs. This idea reduces art to a cultural industry, allowing for the financialisation of entire city districts and entire sectors of society; artists become mere agents of a previously defined upfront commitment.

I think it is important to try and formulate what is happening to our cities. More so because artists are often seen as the driving force behind this unbridled gentrification. What we tend to forget in this analysis is that artists are precarious pioneers who do not have the means to change or invest in the popular neighbourhoods in which they settle. They are therefore the first to leave them for lack of financial means once gentrification is complete, leaving them in the hands of the real estate business, which creates artistic deserts where only trade flourishes. Most of the places where I have lived and worked are now destroyed and have become showcases for what city managers like to see as culture (think of Katendrecht in Rotterdam in the case of the Netherlands). Artists (as well as the popular classes) are being pushed away from the centres, which become completely empty of life.

Exhibited in Riga, these neon lights spoke of the colonisation of Eastern Europe and the Baltic by Western Europe, with its capitalist values and a model of society based on competitiveness.

As a small series exhibited in an art fair booth, they addressed directly the art market and the notion of success.

These neologisms therefore change their frame of reference in view of their exhibition location. They were indeed designed to address a particularly cynical era and world view, namely the neo-liberal philosophy, which is unfortunately expressing itself in very different sectors.

PH: Can you say something about the last couple of months, since Covid-19. In what way did it influence your way of working, on teaching at the academy, or on your art projects and exhibitions?

ALP: As an artist, I am used to working long hours alone, so as far as studio work is concerned, it hasn’t made much of a difference, except that I can no longer choose to leave the studio!

When it comes to teaching, the limits of digital platforms are reached quickly. It may depend on the media used by the young artists studying but the tactility of things is essential, and it quickly becomes difficult to talk about a painting, an installation or a sculpture that one has never experienced physically.

The same applies to decision-making structures. Having Zoom meetings between colleagues helps to sort out organisational matters but having a content debate about long-term visions is almost impossible. Digital communication is therefore not viable on its own, it can only deal with the most urgent level.

On the other hand, having a proper teaching contract in a situation such as the one we are living through, has obviously helped me a lot. Many of my artist friends who either don’t teach or do so but in deplorable conditions because their schools don’t protect them socially, are quickly finding themselves in a very precarious situation. The social responsibility of employers is indeed more important than ever.

As for exhibitions and other projects, everything that had been planned before this crisis will be done in one way or another. I am more worried about the next few years. So many museums, galleries and non-commercial spaces have had to postpone their programming, so receiving new invitations could prove difficult.

The other aspect is obviously macroeconomic. If austerity, at national or European level, were to be the response of our authorities to the crisis, which seems to have been the only response envisaged during the last crises Europe has gone through (whether we think of the financial crisis in 2008 or the debt crisis in Greece), social and cultural budgets are in danger. Again.

PH: In what way have the current circumstances affected your way of thinking in general, and specifically regarding the words of Neo-Logos? Have you developed new thoughts on them, and about the state we are in now?

ALP: With these neologisms, I have literally tried to ‘make words’ to express trends and attitudes that particularly worry me. Many seem to think that crises are moments of opportunity. I doubt it. My sceptical nature leads me to believe that unless we question the legitimacy of structures such as the European Commission, the European Central Bank or the International Monetary Fund and start a drastic change in economic, social and ecological policy, our future in Europe does not look bright. I don’t even dare to comment on the rest of the world.

Crises unfortunately serve much more systematically to muzzle (or even repress, control and hunt down) social movements and liberating forces. Think for example of the fact that a fourth feminist wave was at work before the beginning of this crisis and that the demands made by the different tendencies that make it up do not seem to be part of the priorities of our governors to get out of this same crisis! Bringing these demands back to the forefront is going to be a challenge.

From this point of view, Neo-Logos expresses a state, a quasi-status quo, and this one hasn’t really changed. Perhaps these neologisms are simply underlined by this crisis…

PH: What was/is your survival tip for the current time? Any new ritual or challenge for instance?

ALP: Survival is strangely part of the practice of art. Surviving financially, mentally and intellectually. The current political climate is deleterious, and this is not something that dates back to the Covid 19 epidemic, which does not make this task easy. The intelligence and ingenuity developed by people to survive and live decently is enormous. I wish that this force from below would become so pressing, so present, that it would force our decision-makers to make real paradigm shifts in terms of social, gender, and racial equality.