At the highest point of the Y-slope, the new work ‘The Great Indecision Council’ has settled for the upcoming months. Paris-born artist Romain Tardy is the brain behind the light and sound installation and visualises the most common online searches of people in the region. The work immediately grabs your attention as its abstract patterns and words alternately appear and disappear before your eyes, giving an insight into the thoughts of Amsterdam residents. We spoke to Tardy himself to find out more about it. 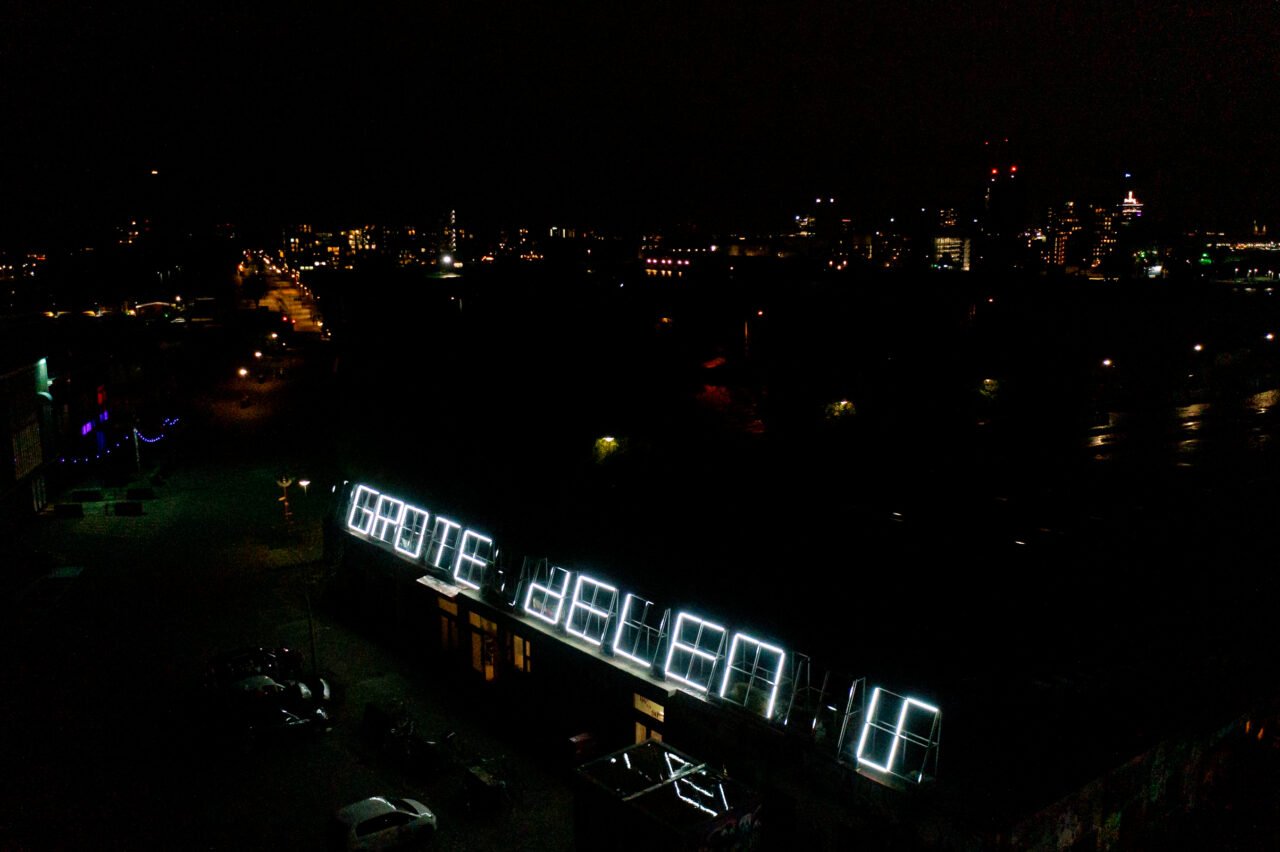 Can you say a little bit about the role of light and sound in your work and what effect this has on the audience?

“Although I’ve been working with light and sound for years, I wouldn’t consider myself neither a light nor sound artist. I think one of my artistic goals is to create sensory environments which respond to an already existing context that could be physical, historical, or sociological. In this sense, light and sound, especially when combined, allow me to bring my own ephemeral landscape into public space that blends in with lights and sound which are already part of the surroundings.

The work The Great Indecision Council displayed at the NDSM depicts abstract patterns as well as words. The previous times the installation was on view elsewhere, these words showed the most frequent Google searches of the country it was located in. How did you come up with this idea?

“Yes, this is how the installation usually works. To make it more site-specific for the NDSM, I reworked the algorithm for this version, so it combines the most popular words on Twitter in the Amsterdam region with the most frequently consulted news on a national level.

It’s even a step closer to my original idea: I wanted this installation to reveal and amplify what people are actually interested in. My assumption is that what you look up on Google or Twitter when nobody is watching you reflects your real thoughts in all their dimensions, where the most trivial thoughts could meet conceptual or political content.” 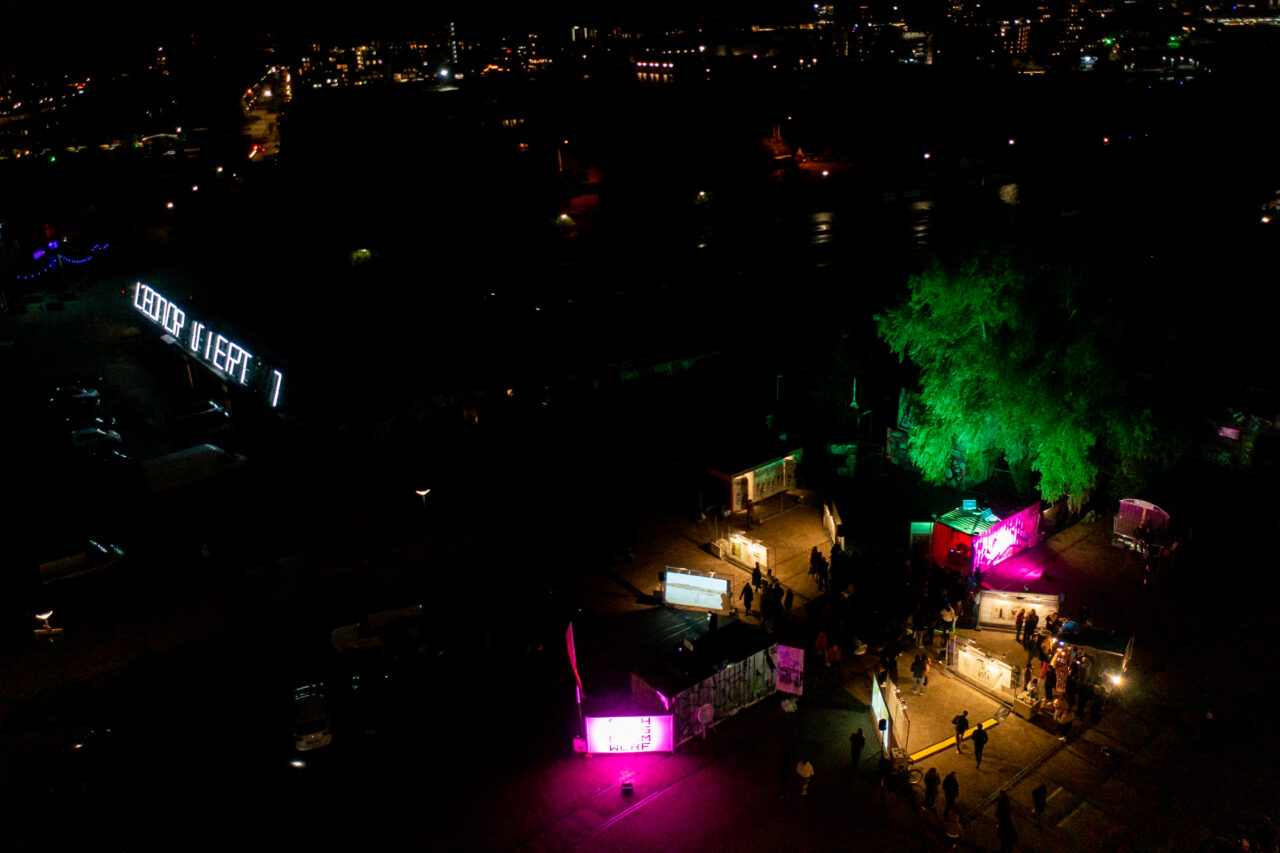 What is the most surprising online search you encountered?

“One part of the concept of this art installation is that I cannot know in advance what will be displayed. This loss of control is both stimulating and challenging for an artist. Another thing is that most of the time, I can only ask local people to explain to me what the installation says as I don’t speak the language. This could create some very interesting interactions sometimes.

One story I could share about being surprised by a Google search was the time I showed this installation in France right in the middle of the ‘Yellow Jacket’ protest period in 2019. At that time, the whole country was experiencing massive strikes, and a lot of people were asking for the government to resign. It was very interesting to see that the installation was amplifying these voices. I think the installation really made sense as an art project in the public space.”

What do you find interesting about bringing the digital world to the physical realm and confronting the audience with it?

“I’ve never felt comfortable with the discourse which tends to present everything digital as “nonmaterial” (think about the words ‘cloud’, ‘air-something’, ‘wireless’, ‘light’, ‘smart’ and so on). The technical infrastructures behind the remote and wireless connections are massive and complex, and we also now start to collectively realise the immense quantity of energy they require. As an artist, my response is to make these structures visible: although I have a visual approach that is quite minimalistic, all technical structures and cables, are visible in my work. Of course, the fact that I often work on a large scale is also part of the same idea.”

What do you think of the NDSM as a stage for your work?

“I like the idea that this temporary work takes place in such a vibrant artistic place among other artworks – some official, some unofficial – as the area is also a major place for street art. I also see an interesting parallel in the various ways of using text: from graffiti to some previous neon works commissioned by Stichting NDSM-werf in which freedom of speech is a central component.”

‘The Great Indecision Council’ will be on display at the NDSM from the 5th of november up to the 4th of december. Click here to see more of Romain Tardy’s work.