Jonmar van Vlijmen (1980) and Ronald Boer (1981) are artists and founders of De Onkruidenier. They collect stories and histories of plants with the aim of giving “weeds” a valuable meaning again in society. By questioning systems and speculating about aquatic culture, they try to gain new insights into the relationship between man and nature.  For example, the weed specialists started the project ‘Buurtsuper‘ in Amsterdam Noord , not as a traditional neighbourhood shop, but as a collective search for the relationship between city people and city plants. In recent months Jonmar and Ronald have grown plants that are now in a number of garden containers on the site which are part of the NDSM Zomerwerf. 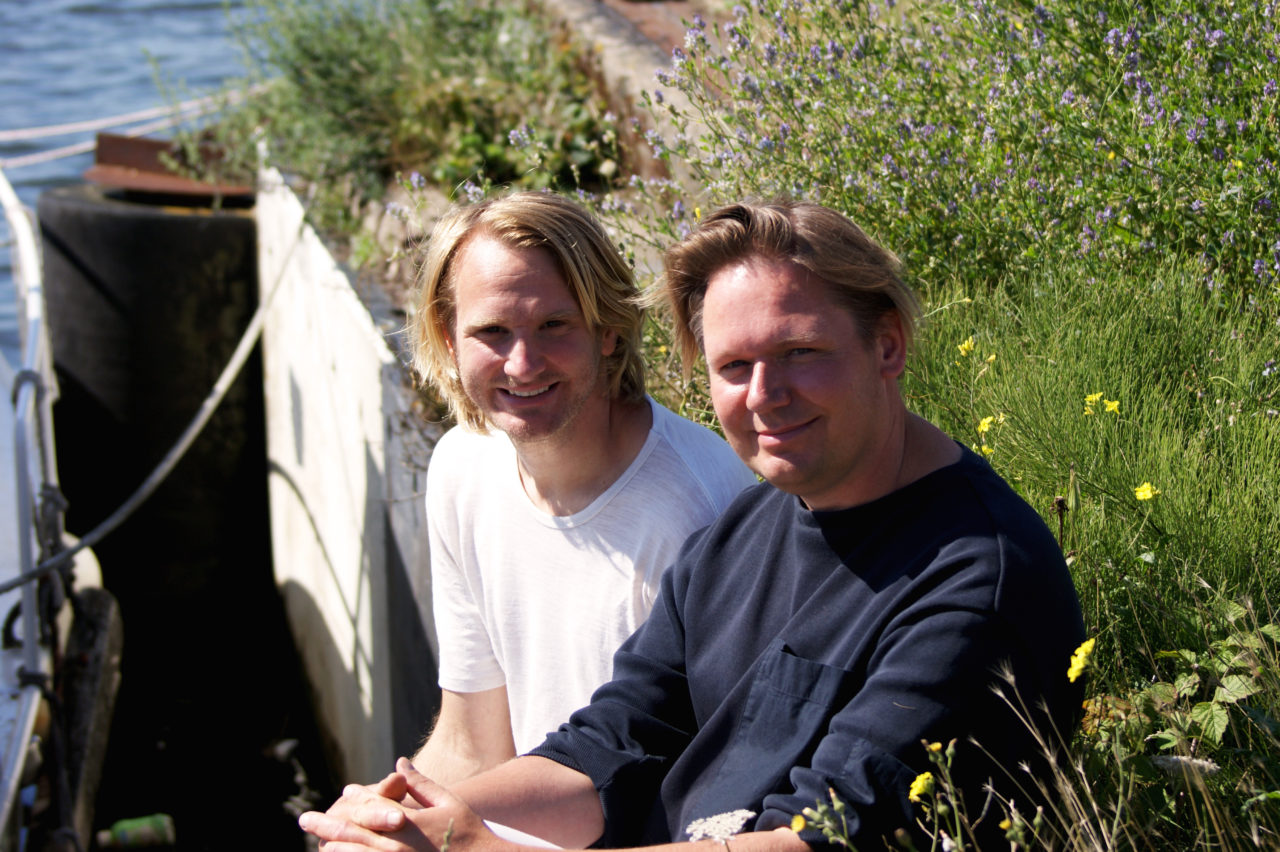 About seven years ago, Jonmar and Ronald moved into their current home. During this move, the entire contents of their bookcase were searched and sorted by value. In the process, the two came across a book that would determine the course of their further careers. “We moved to a smaller house, but got a very large garden in exchange. A lot of stuff had to go and we also had far too many books. While we were tidying up, I came across a book I once got from my grandmother. This book is called ‘Elsevier’s Guide to Wild Vegetables, Fruits and Spices‘. It was printed and distributed in a very large print run in the 80s. Besides beautiful illustrations of weeds, there is a chapter in the back of this booklet with all kinds of recipes in which weeds are used. Think of sauces, nettle croquettes and all kinds of liqueurs. I found that fascinating”, Jonmar says.

Jonmar and Ronald both have a background in landscape architecture and after discovering the booklet they started looking at plants differently. “In the period that we were involved in landscape architecture we got to know thousands of trees, shrubs and plants. We had to learn the names and characteristics of these and we also had to know what these species look like in different seasons. This is of course very focused on how to design a landscape with an emphasis on functionality. When I studied my grandmother’s book, I started to look at my own plant knowledge in a very different way”, says Jonmar. “In addition, so much has happened in the field. The changing climate plays an increasing role. Moreover, we have to think about our water management, about heating in the city and a declining biodiversity in the countryside, which is actually increasing in the city. To a large extent, a landscape looks a certain way because of the agriculture we practise. I think we can tell that by the plants that grow there. That is always the common thread running through our work”, Ronald says. 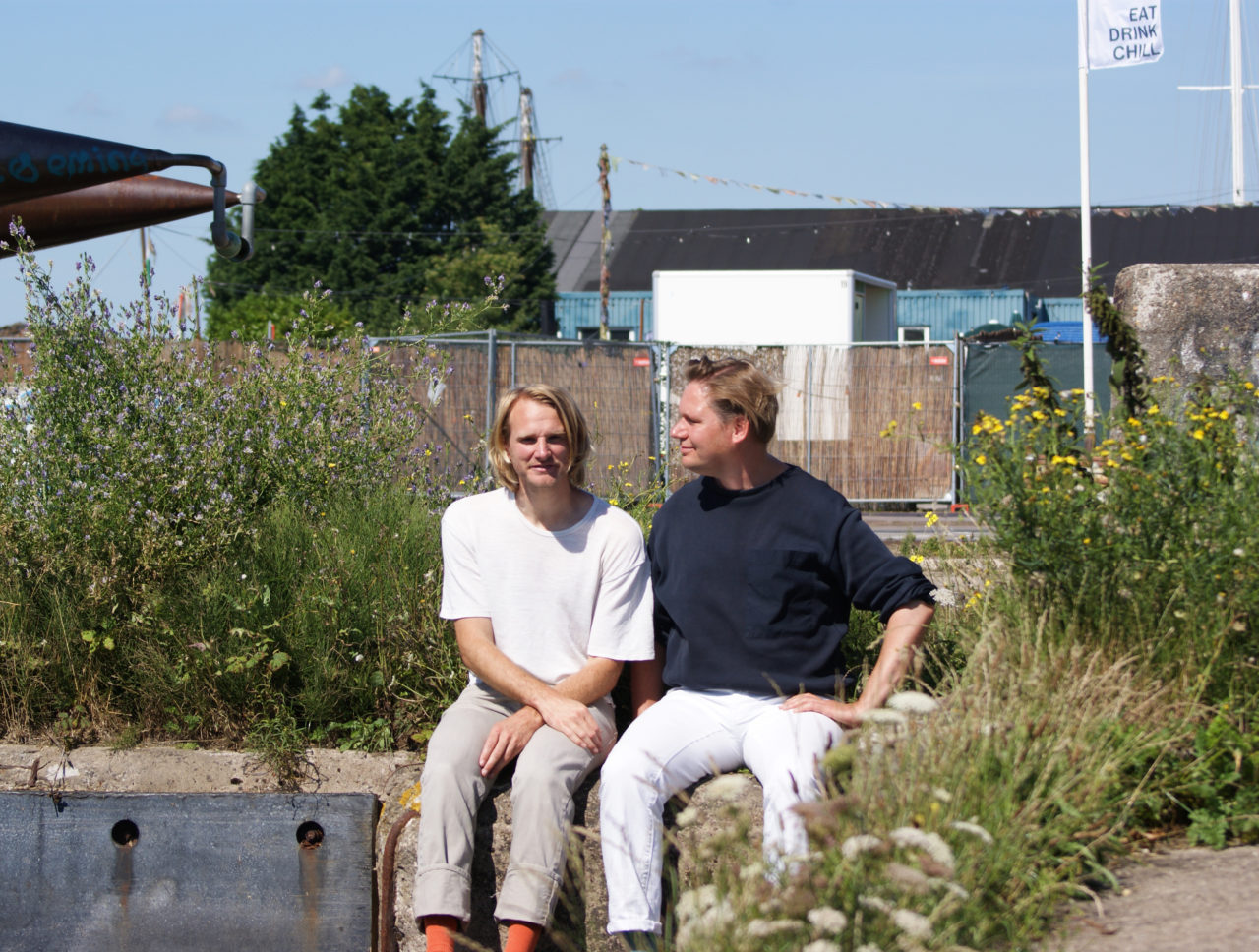 With their work De Onkruidenier tries to better understand our living environment and the landscape we are part of. “There is some sort of interaction between us and the ecosystem. We are part of it and we influence it. By telling people why a certain plant carries a story in a specific place, people better understand why a place looks the way it does”, Ronald says. De Onkruidenier organises workshops and expeditions in (urban) nature to give people insights into the usefulness and possibilities of locally growing plants.

There is an entirely different generation that no longer puts its career or the economy first. Other things become important and we no longer see ourselves as the centre of the universe.

“When we studied, there were great city architects who considered the city to be the ultimate place for self-development. Rem Koolhaas has written a book this year in which he emphasises just how valuable the rural area is and how few people still know about it. I think you really need that interaction and that’s also something we’ve been working on continuously over the past few years. It’s nice to see that thought patterns are very different now. There is a completely different generation that no longer puts its career or the economy first. Other things are becoming important and we no longer see ourselves as the centre of the universe. We are becoming more aware that we are to take care of other organisms around us”, Ronald emphasises. 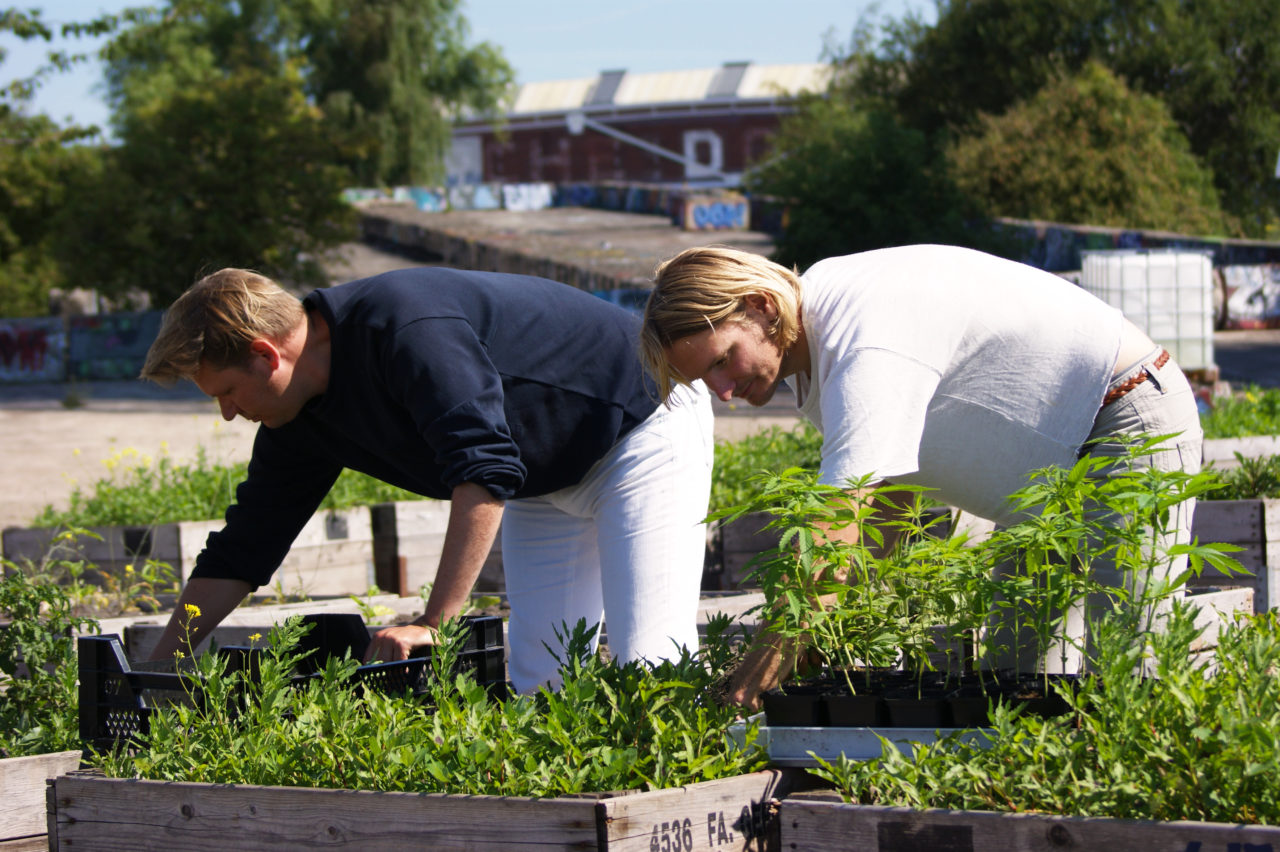 While doing field research, De Onkruidenier takes into account what grows on the spot and which people make use of the landscape. Jonmar and Ronald speak to residents, foresters, farmers or other experts who are in some way connected to the piece of land that interests them. In addition, the history of an area plays an important role in their research. “Many plants have ended up in the port of Amsterdam as a result of shipping from other continents. These plants have gained a foothold here and have started to multiply via the port and become part of the Netherlands”, Jonmar says. “It turns out that between the paving stones in the city, the ‘Sorghum’ crop is growing. This is a kind of grass that serves as staple food in certain countries in Africa. Now it is becoming a very hip superfood that has traveled with us and is now just growing in the city culture”, Ronald continues.

According to De Onkruidenier, the NDSM shipyard, with its location on the IJ, is an interesting area. “This area has a rich history. Ships were built here and the harbour was a hub for the import and export of products. Plants and animals also travelled here”, Ronald says. “Because of the location there is a connection with the whole world, which is already a beautiful realization that can be given to people”, Jonmar says. “At the same time, the changing climate and a rising sea level is also an important story to tell. Amsterdam used to be influenced by the tides in the canals. All that has now disappeared with the construction of the sea dikes, locks and dams with which we can have control. But can we still rely on the sea dikes in the future? Shouldn’t we move towards an entirely different model for the city in which water will play a greater role? Moreover, the question is how we can prepare for this. Then you can look at the landscape again and adapt it to what we need. But perhaps we should turn it around once and for all, that as human beings we are going to adapt to a different landscape and a changing living environment”, Jonmar says. The latter is something that De Onkruidenier has been researching with their project SWEET – SWEAT since 2015. This project speculates about the possibilities of a new type of human being that can adapt to a saline landscape. 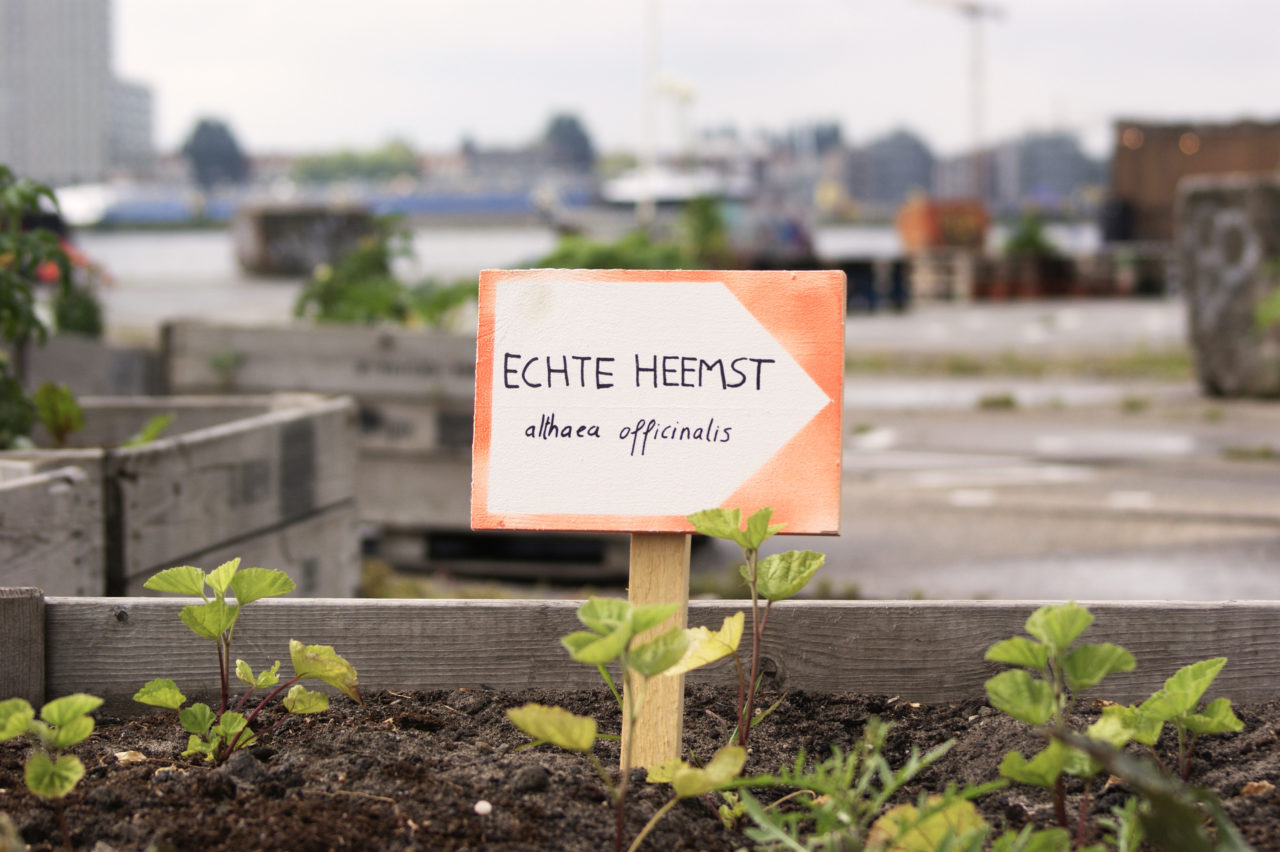 De Onkruidenier wants to introduce people to what special herbs there are. An example of this is the ‘Heemst’ of which Ronald and Jonmar have also placed a number in their garden at the wharf. This plant came their way when they started to study the Waterland in Amsterdam-Noord in 2016, where there had been a great flood a hundred years ago. “The flood consisted of water from the Zuiderzee and the closing dike was not yet there at the time. The salt water had been in the area for about six months. In Waterland we went looking for salt-loving plants that would indicate that there was still salt in the soil and somewhere on the dike in Durgerdam we finally found the Heemst”, Jonmar says. De Onkruidenier found out that the English name for this plant is ‘marshmallow’. A few thousand years ago it was the ancient Egyptians who harvested the Heemst roots in the Nile delta. They dried these roots, ground them and mixed them with protein and a sweetener. This is how the first candy came into being. “Now we’re trying to make marshmallows like those Egyptians and that’s become part of our practice”, Jonmar says. “I really think you’ve made thousands of marshmallows!” Ronald laughs. “And tasted! I haven’t been able to make the ideal marshmallow yet, but we’ll keep trying”, Jonmar chuckles.

De Onkruidenier works like an ecosystem in which many parties are involved in their process. “In a way, our work is like an adventure where we go on research in a non-scientific way and look at things from an artistic point of view,” Ronald says. “We do work a lot with scientists and I think we also benefit a lot from their knowledge. Conversely, we hear from scientists that they find our method very fascinating. We don’t have a pattern that we have to take into account, because we don’t have to publish. There are no preconditions or requirements that we have to meet, which gives us a lot of freedom,” Jonmar explains. 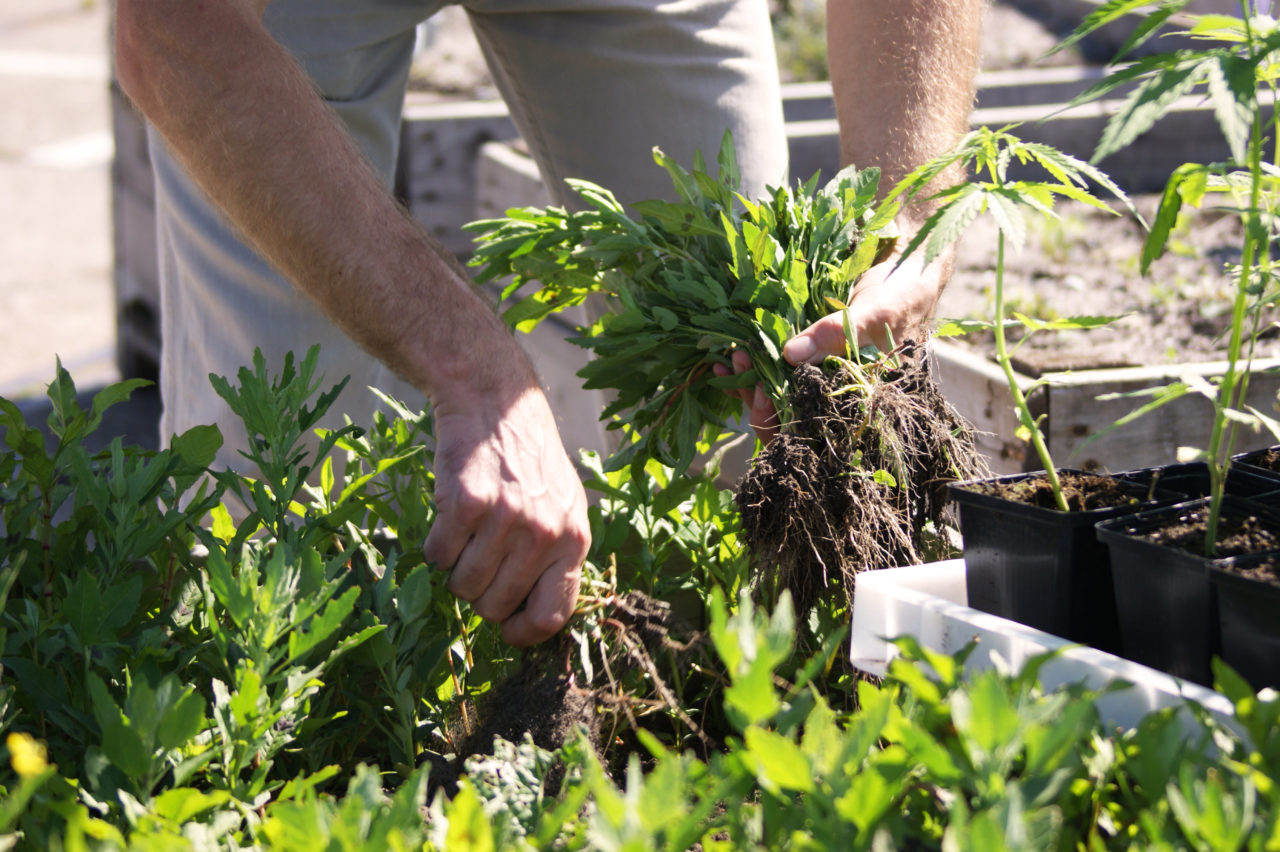 As De Onkruidenier shows in their Urbanarium – their own archive full of applications of wild plants – weeds are useful and can also be very tasteful. Jonmar and Ronald are therefore very concerned with where the distinction between herb and weed lies. “It’s very much about the evolution of a plant. I think the difference lies in the fact that some plants have been cultivated and others are not, or not yet, or are no longer interesting because of certain contemporary demands we humans make”, Jonmar explains. “And an example of such a contemporary requirement is that the product must be able to be pre-packaged in the supermarket for a week. A lot of old-fashioned leafy vegetables don’t lend themselves to that at all. You have to cut such a plant right away and eat it fresh”, Ronald explains. “So we have created a certain food system that is concerned with productivity and efficiency in agriculture. That’s why we’re left with a monoculture. We were able to tune everything to perfection, but that’s a fragile system. I think there needs to be a turnaround and that we need to start thinking more about how we can apply a polyculture and increase biodiversity again,” Ronald continues. “That’s a key mission in our work. I think what we do is an important profession, which hopefully can be greater in the future. I think that’s our wish”, Jonmar says.

Click here to take a look at the projects and the Urbanarium of De Onkruidenier.