“Are We Future Sediment?” is the question posed on the five-meter-tall banner that has been installed at the NDSM at the beginning of this month. This temporary installation is part of a new project by Mexican artist duo Amauta García and David Camargo who are currently artists-in-residence at the Jan van Eyck Academy in Maastricht. The artists sent in the winning entry for the Open Call that Stichting NDSM-werf has put out among the Academy’s participants. With this work, García and Camargo visualise the condition in which Amsterdam might find itself in fifty years; namely five meters below the sea. 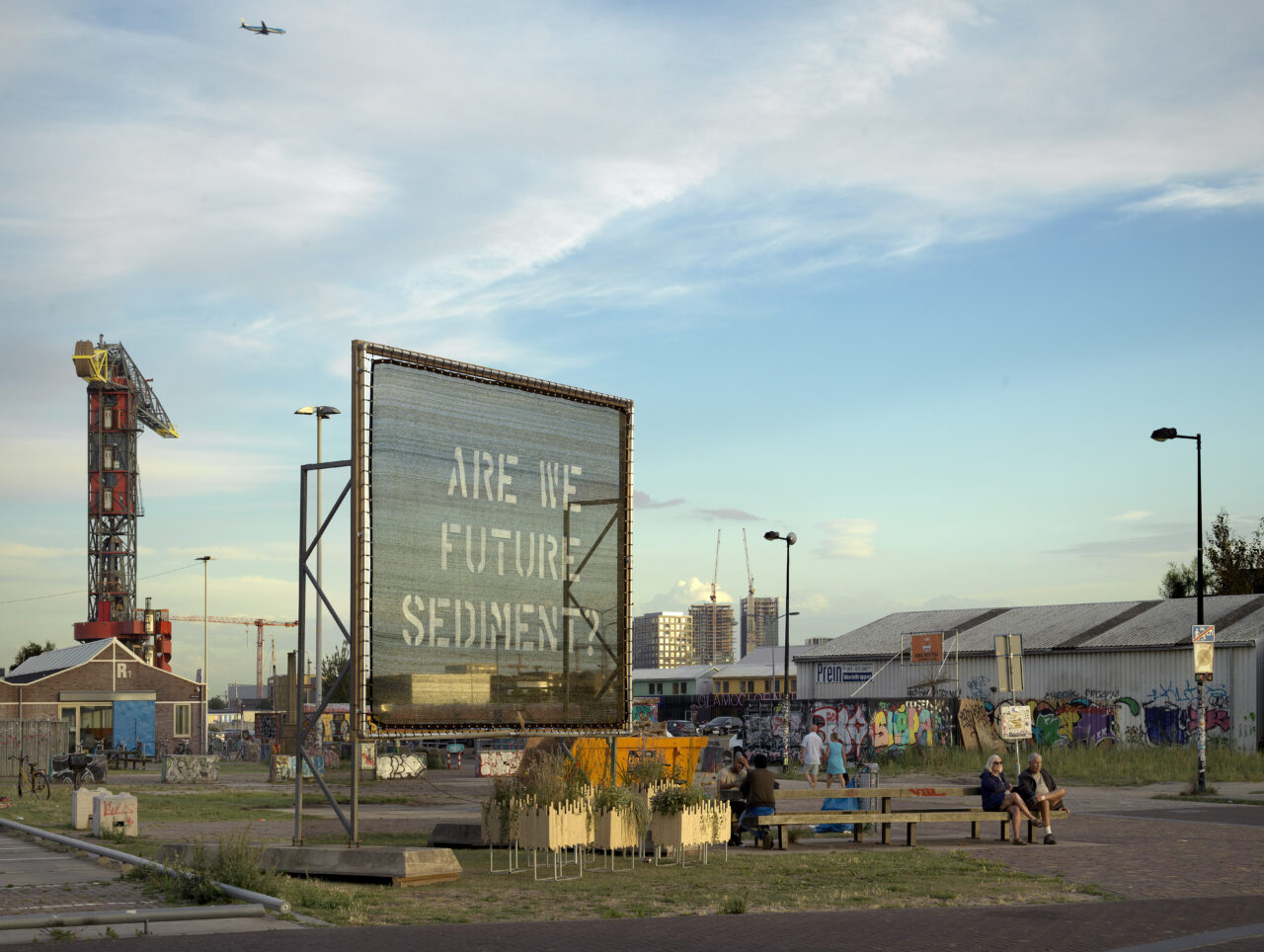 García and Camargo met fifteen years ago and have been working together on different projects since 2011. García’s work includes sculptures, video’s, and interventions in public space and touches upon socio-political themes among which unequal access to housing in cities. Camargo is a visual artist whose work focuses on exploring narratives around the notion of simulacrum (an image or representation of someone or something) in the context of a society mediated by images. Together they founded an artist collective in Mexico City called ‘Colective Tráfico Libre de Conocimientos’, TLC (Free Knowledge Traffic Collective). The collective has five other members and experiments with public space, education, and art and is focused on critical thinking, collective learning, and sharing knowledge.

The rather compact city of Maastricht is a completely different world to the artist duo since they are used to travelling long distances in Mexico City. Their stay in the Netherlands has given them more time to focus on their projects and the residency at the Jan van Eyck Academy offered them the opportunity to share their work and research with various people and gather their input. Thanks to the Open Call, the artists got to discover the capital city as well. They had not heard of the NDSM in Amsterdam before, but during their research, they learned a lot about its rich history as a former shipyard as well as the city’s possible watery fate. The latter inspired them to come up with the idea for the installation titled ‘Are We Future Sediment?’ at the NDSM.

Water is a recurring theme in the work of García and Camargo, which they approach in a very poetic way. They established that there is such a contrast in the relationship the Netherlands has with water as compared to Mexico. “In Mexico, we have a lot of problems with water, but differently than in the Netherlands. In Mexico, there is a lack of it. There is a lot of rain, but it is put to no use. The water that falls, mixes with the soil of the city so it becomes dirty immediately”, García explains. “The dryness in Mexico is very complex. In that sense, we need to think about how we could collect the rain”, she continues. For the Open Call, they proposed an idea for a fog catcher they had been wanting to realise in Mexico but were not able to yet. “It’s a very good opportunity to learn how to do it, and perhaps when we come back to Mexico, we can do it there as well”, García says. “It’s like a sketch for other projects”, Camargo adds.

The installation the artist duo came up with consists of a five-meter-tall banner of which the structure is commonly used for public advertisement along roads in the Netherlands. Inside this structure is a mesh fog catcher that traps water droplets suspended in the air. It is essentially a water collector that condenses the rain and through a piping system, the water is directed to the mobile garden in front of it. The total height of the structure is five meters; the estimated level the water will reach in five decades if no action is taken. Most notable is the message that is embroidered on it: ‘Are We Future Sediment?’. 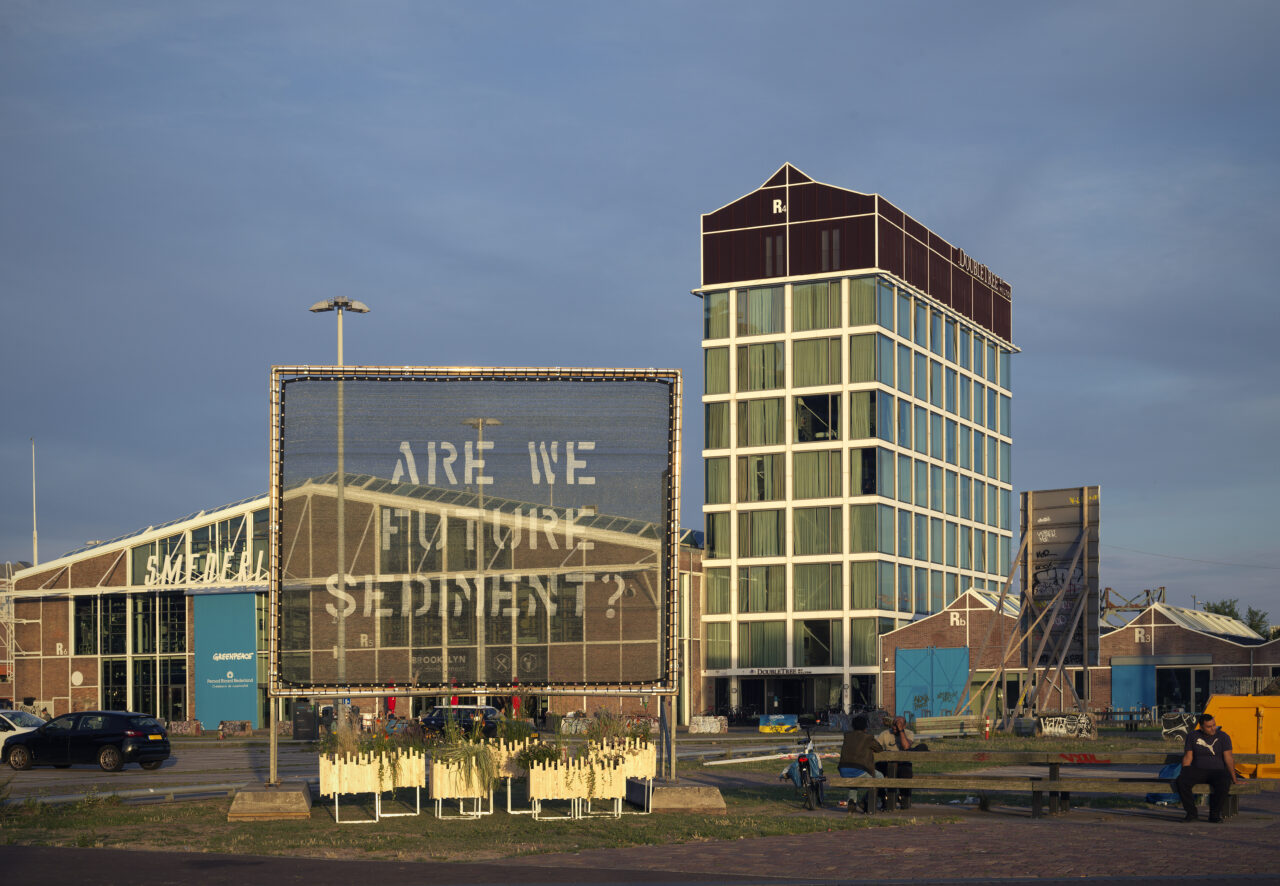 Instead of fighting the water, maybe we can accept that it was here before us. How can we live with it and not against it?

The artists want to reflect on the idea that Amsterdam’s current soil could become tomorrow’s sediment. “In that sense, we are the future sediment. And we need to think about what kind of sediment we want to be”, García says. Their approach to the looming water is quite unique. “Instead of fighting the water, maybe we can accept that it was here before us. How can we live with it and not against it?”, García adds. “The problem is that we only see water as an object now, in a very utilitarian way. Maybe it would be good if we can develop a kind of empathy for it”, she continues. Therefore, the work does not only capture the water but welcomes it too.

Before working on this project, García and Camargo started researching two underwater volcanoes that are located at the bottom of the sea in the North of the Netherlands. These volcanoes formed the soil of the Jurassic period and are now part of the marine sediment. “You need to remember that the volcanoes and the water are entities of nature”, Camargo says. “Something we are thinking about is if water and volcanoes have their agency and how we can understand that. How can we develop a different relationship with them? Instead of thinking about them as things or resources, we can think of them as subjects with their own rights and form of living”, García adds. With their installation at the NDSM they want to “continue this exploration of water as a living being that has geological memory.”

The public space is not only the physical thing, the path, the park, the street, or the square. It’s the relationships that are developing that space. It’s about people sharing experiences.

The artists think of the NDSM as a very rich public space where there are a lot of different things and projects existing at the same time. They emphasise the importance of the human element in public space. “I think that work in public space can produce that effect of weirdness. It’s like a shock for people because they aren’t used to seeing something like that and it allows people to share something between them. I think that public art can increase the ‘public’ in the public space”, García says. “The public space is not only the physical thing, the path, the park, the street, or the square. It’s the relationships that are developing that space. It’s about people sharing experiences”, she adds. Once the public intervention has come to an end, the duo would like to donate the plants that are part of the mobile garden to the people living and working nearby.

García and Camargo purposefully chose to incorporate a familiar object – the banner – in their work to take it out of its usual context. “I like works where common objects found in the streets are used, like these kinds of billboards. I see them a lot in the Netherlands for marketing and publicity purposes. They can sell anything on them: products, houses, or dreams. But we can also use them for other ideas, and people will still recognise them”, Camargo says. “It shows the possibility of objects”, the artist adds. In this context, the banner is used to convey a message upon which the artists hope people will reflect. “I think it is like a joke in a way. The billboard is like a gravestone”, Camargo notes. “It is a question about time. Time is huge, it’s massive. Human life lasts 100 years, but the time of the earth is another concept”, he continues. “So, it’s an invitation to think about the future, but also about the present. What kind of future are we building at this moment?”, García adds.