In the column Humans of NDSM, I am on the hunt for special stories from all poeple at NDSM: from users to visitors to creatives and everything in between. I am curious about what motivates them to come to the NDSM wharf. At the end of this section, the aim is to sketch a picture of who the humans of NDSM are and all their different ways of filling in and using the public space. For this edition, interviewed Ozzy Ulger and Tim Lensvelt, creatives and music lovers with their own radio station Radio Tempo Não Pára (TNP), in NDSM-Fuse. 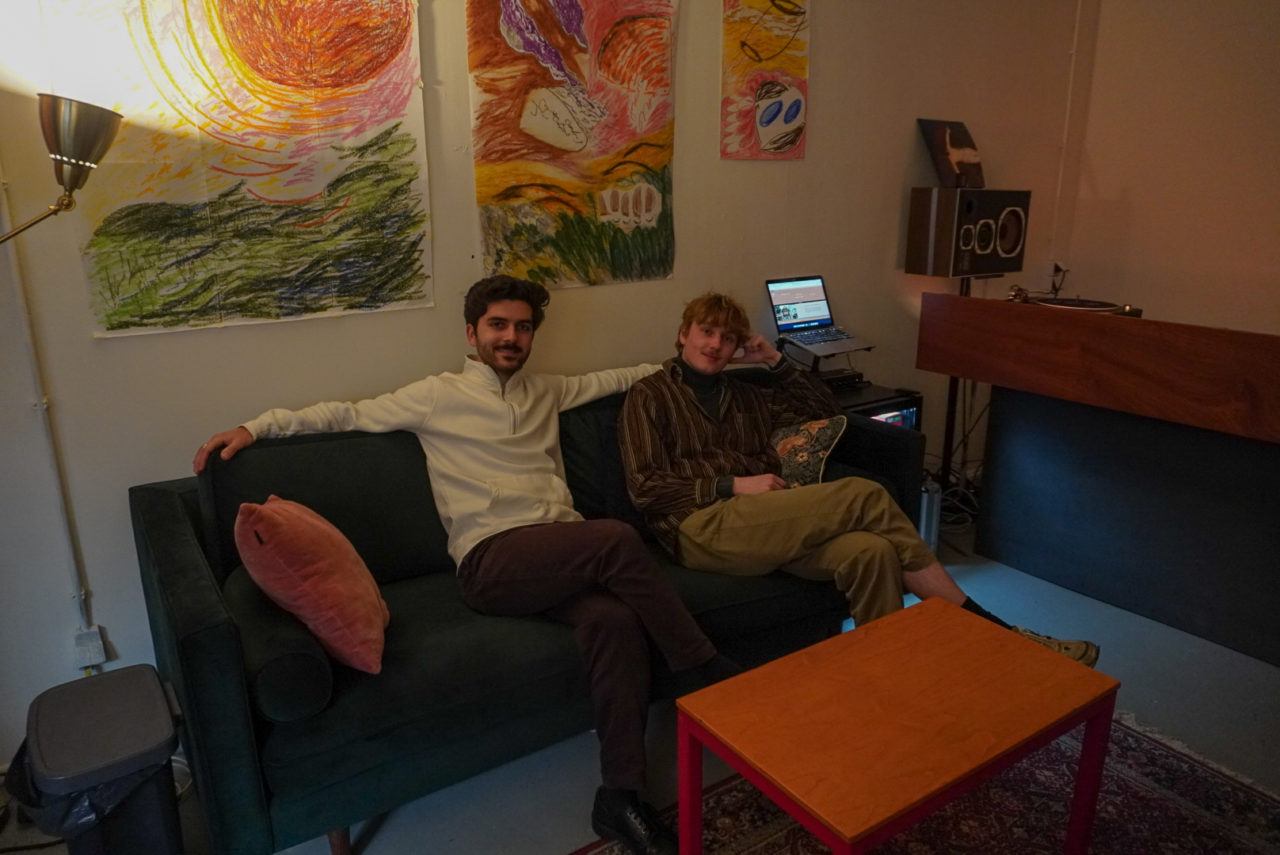 Ozzy (left) and Tim (right) in the studio of Radio TNP

I speak to Tim and Ozzy in a video call on a Thursday. During the week the gentlemen work their jobs, but as soon as it turns Friday the laptops are closed, the headphones are put on and their radio station goes live. From NDSM Fuse in de Loods they stream sets by starting and established artists in all genres imaginable: from danceable swing to crazy experimental electronic music. I ask the boys how they started as radio producers.

“It actually started with a birthday present,” says Ozzy, “I got a cassette tape from my best friend, called Tempo Não Pára (time doesn’t pass). On that tape he had a two-hour recording filled with all kinds of friends who talked about childhood stories from our past, in between the stories they played music. I really enjoyed listening to this and my roommate also enjoyed making it, so we started doing that together more often. We would invite artists who we thought had a unique sound and we would record them and put the sets online. We received such nice reactions that we also started organizing parties based on those sets and the music. That was also a resounding success and at one of those parties someone came to us who was looking for another party to share a studio in Fuse with. We had the idea of ​​making a real TNP radio station for some time, so we took that step and now we are here in the Loods. ” 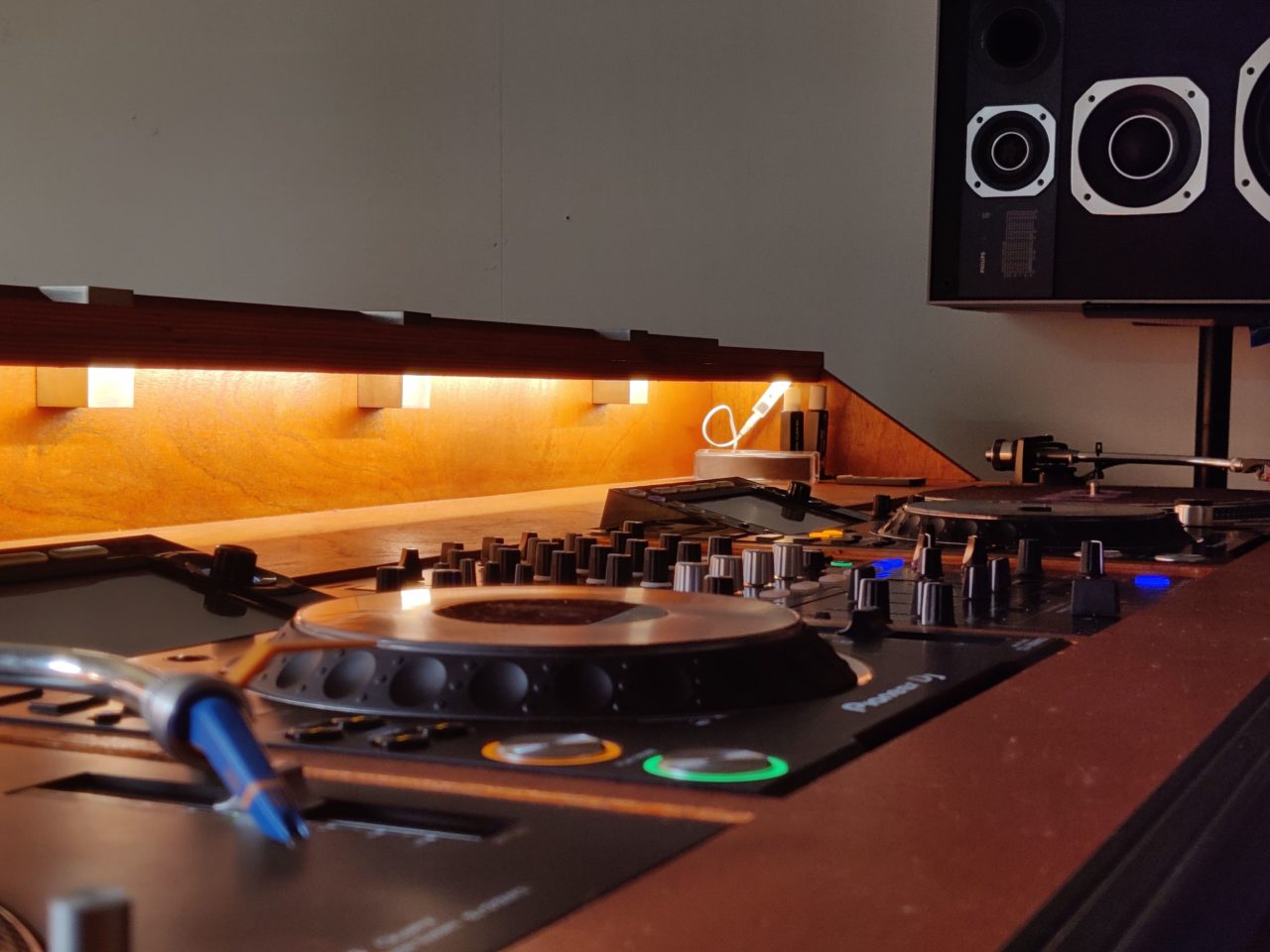 Tim and Ozzy tell me how they set up a crowdfunding to raise money for their new studio. This was very successful, and so they were able to make their dream come true. This shows that there is an enormous benefit factor behind the idea. Now they can be heard live every Friday and Saturday. “What really dawned on me when we first visited the NDSM was the realization feeling that it was really going to happen,” says Tim when I ask what he thought when he first saw the NDSM terrain, “something we had been working to for a year was about to become reality. For me it was really that realization, it felt like a big step to move to a real studio. It is a bit like your baby that you see growing up. ”

We try to be as transparent as possible, with an open model

Ozzy responds: “I really only know this area from the events that take place here. Only later did it really dawn on what an incredibly cool place this is. All artists who come to play also find te NDSM wharf such a cool location. ” Radio TNP tries to break the space between people and radio by turning their radio station into a meeting place. The goal is that artists as well as visitors or interested parties can walk in, relax on the couch and make connections. Everyone is welcome, an inclusivity mission that also fits with the vision of Stichting NDSM-werf.

“One of our core ideas is that in the end you get the most out of everyone’s strengths if you involve as many people as possible and can show their strength,” says Tim, “it is very difficult to be truly inclusive, in the fullest essence of the word. I think we always do our best, but you still notice that you reach certain groups less easily or less quickly. We really want to know from artists and listeners what we can improve. Not necessarily behind closed doors, or through a whisper in a microphone. We try to be as transparent as possible with an open model. So we try to show that on the one hand by having a diverse musical programming, and on the other by having an open studio, as far as corona allows of course. ” So, a studio with open doors, where you do not have to make an appointment to come by. An open space that is transparent and where a few basic rules apply to create a safe environment.

Then I ask Tim and Ozzy what the NDSM wharf would look like if they were allowed to fill in the public space all by themselves. “I would like to transform the yard into a meeting place for everyone,” begins Ozzy, “because I think there are too few places like that in Amsterdam. In addition, I would like to create a place for education. So a place where people can enrich themselves with knowledge in an accessible way. We are also making a podcast with that idea ourselves at the moment, to make science more accessible. ”

Tim nods in agreement from my screen. “I therefore think when we are talking about an ideal image that there also is music and dancing involved,” he adds, “but that there will be additional things to that. I think it is important that we can mainly show the various skills of people and not limit them to the usual image we have of those skills. Take nightlife for example, a lot of people think it’s something that takes place between 1am and 5am at night, but it can be so much more than that. To give just one example: we once had DJ’s play in a Turkish supermarket in Amsterdam East (see video below). Then you get the situation that experimental club music is played in the local neighborhood supermarket; a very intyeresting contrast. If we had the open space of the NDSM at our disposal, we would also like to experiment with that kind of thing. ”

I notice how Ozzy and Tim’s story inspires me personally. While listening to their story from my screen, I realize once again that even in these crazy times there is still a lot to experiment and develop. Finally, I ask the gentlemen about their future plans for Radio TNP. They immediately know what to say: “I would very much like to invite other parties in the field,” says Ozzy, “to get in touch with us to work together and see what we can do for each other. At the moment, also due to corona, we find it difficult to contact other makers. In addition to making radio, we also do all kinds of other things, maybe we can create a nice cross-pollination with our skills together. We think it would be great fun to collaborate with other humans of NDSM in the future ”

So hereby an appeal to all makers at NDSM: do you want to be part of Radio TNP, start a collaboration, are you someone with an available fund, or would you like to engage in a conversation with Ozzy and Tim? Contact them via the email address: [email protected] Or approach them through their Instagram or Facebook.

And last but definitely not least, check out a personal favorite from the sets broadcast by Radio TNP below: