In the column Humans of NDSM I am looking for unique stories from all the people who can be found at the NDSM-wharf: from users of the wharf to visitors to creatives and everything in between. I am curious about what motivates them to come here: for example, one person uses the site for a nice stroll after a long working day, the other perhaps as a source of inspiration for a new work of art. At the end of this column, the aim is to sketch a picture of who the humans of the wharf are and all their different ways of using the public space. In this context, for this first edition, I spoke with Lies Aris, an artist wearing many different hats who currently resides in the Treehouse on the shipyard. 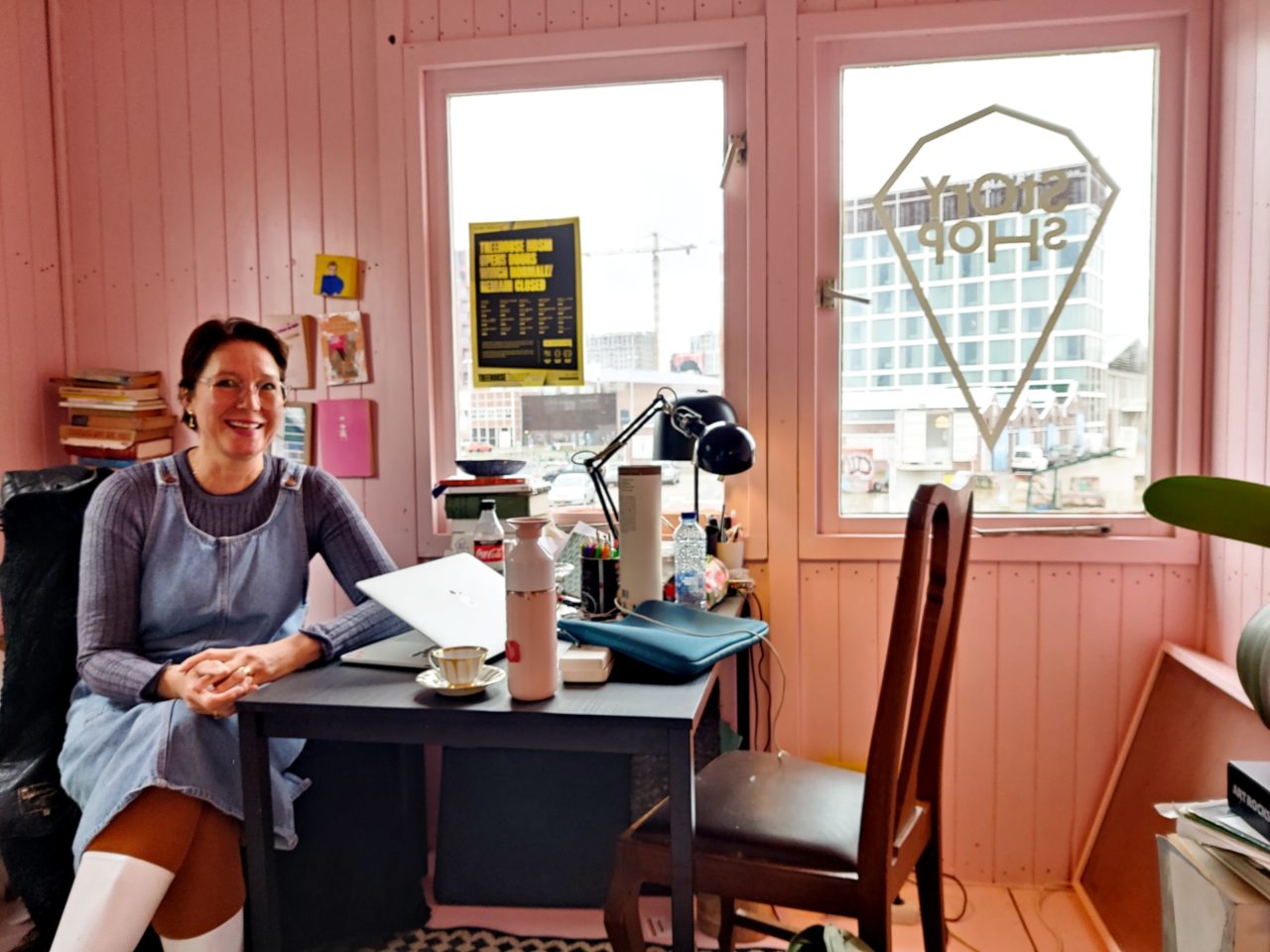 As a child, Lies Aris wanted to become a cashier, but eventually ended up in the art industry. She once started as a sculptor in raw material; rough work with a lot of drilling and chopping. Later she turned to writing, but her fascination with images (tangible or not) has always remained. In addition to being an artist and writer, she is also a teacher, copywriter and mother. From her studio Storyshop she invents and creates her stories. This was also the place where I asked her about her experiences as an artist on the shipyard. While I am offered a cup of ginger tea on an antique gold-rimmed cup and saucer, Aris begins to talk about herself and her association with NDSM.

“In reality, my existence is the life of a writer, but I write in collaboration with images. I paint or draw every scene I have in my head first, and from that image I write that scene. I’m interested in stories anyway. I don’t really see people as only human, I see the stories behind the person when I encounter them. I have always worked with that idea lot, also linked to neighborhoods in Amsterdam. People who live in a certain neighborhood always have something in common. ” Lies tells me that in the past she made neighborhood newspapers for various Amsterdam neighborhoods.She also did this for Amsterdam-Noord, with the idea of portraying and expressing the Northeners like rough diamonds. “I searched for characters for the newspaper and really tried to capture their essence,” says Aris.

The versatile artist used to be situated in Amsterdam-Zuid with her studio, but had a good feeling about NDSM being a place to re-locate from the first time she visited the wharf. She tells vividly how she eventually ended up in the Treehouse: “I am a bit of an emotional person. I first came here with my youngest son and that day two roosters were walking around here. That is of course not at all why you should change studios, but I thought it was such great fun. It really feels like an entertaining and relaxed place here. I fell for it right away, people were all really nice to each other so I was convinced this is where I should be. ”

Our conversation is brimming with enthusiasm and therefore goes in all directions. Because of all the beautiful stories about her work and the challenges she encounters as an artist, it was sometimes difficult for me not to stray. After a story about the difficulties of fundraising for art projects, we talked about how Lies Aris sees the public space NDSM wharf. She has previously worked on projects in other places in Amsterdam that had to do with public space. She made the film project Paradise Lost, which originated in the Biblical story of Adam and Eve. She rewrote this story from the feeling of emancipation and the desire to emphasize contrasts. “The Bible says that Eve was created from the rib of Adam, so secondary in a way. In my story I made Eve very powerful, on a paradise island in the middle of a concrete environment near Sloterdijk station. Everyone was welcome there and no one was turned away if they did something wrong. I find those kinds of contrasts very interesting, it is also something I encounter here at the yard. ”

When I ask what the public space of the yard means to her, I see a sparkle in her eye and she looks out for a moment to look at her view of the Load Out. “I notice that there is a kind of distance between people and art. What I really want is for people to stop putting art on such a high pedestal, for it to come a little closer. I always find it very difficult when I walk through the Stedelijk Museum not to touch anything, especially with sculptures. I see the NDSM as one large canvas, for everyone and therefore inclusive. I would really like it if something were to come up here, in the public space, with images that you can touch or where you can sit and lie in. I also think it would be fun to make a paradise island again, but then on the shipyard, this environment is very suitable for that, in my opinion.

We then talk about the pandemic and what it did with her work. She told me that, in addition to being a period of many challenges, it was also a great source of inspiration. Especially in combination with space and the people who play along in the space. “Lately I have been very concerned with how people feel and what the physical distance that we have to maintain lately does to that feeling. For example, I have an exhibition coming up in April, it is part of a larger project called Do you feel me? which is about the situation of today: namely the physical distance between people. What does that distance do to people and art forms, are we still able to feel eachother? ”

I want people to start thinking about physical proximity again

As she says this, I am suddenly very aware of the 2 meters of empty space between our seats. “In this context, I am working on the idea of sculptures you can cuddle with,” Lies continues, “I want people to think about physical proximity again, so there will be a large hanging nude and a very large pouf where you can can lie in and your body imprint remains in the pouf. ” For the larger project Do you feel me? Lies is concerned with how various disciplines have suffered from the mandatory distance, and what that does to their art. She talks about, for example, an ex-director of the Circus Renz, who created a flea circus after the bankruptcy of the circus. That is really the ultimate play with what is physically not there at all, because those fleas are of course not really there. And she talks aout a mime artist and an opera singer who is very sad because she misses her audience and therefore feels distance.

When our conversation starts to come to an end, I notice how enthusiastic I have become. The idea that public space and art can merge in order to make art more accessible and cuddly sounds refreshing and fits well with the character of the NDSM wharf. The way Aris talks and takes you along in her creative process is contagious. She is a human of the wharf with a unique view on the world and a positive view on the future: “I have great hope. I am also a bit of a happy goof haha, but I really think that it will all be much better soon. ”

Curious about the work of Lies Aris? Check her website here. Click below to learn more about her upcoming exhibition Do you feel me? In the Cultural Speech Amsterdam gallery:

DO YOU FEEL ME?