In the new column Humans of NDSM, I am looking for special stories from all site visitors: from users to visitors to creatives and everything in between. I am curious about what motivates them to come here: for example, one person uses the terrain as a walking path after a long working day, the other perhaps as a source of inspiration or breeding ground for a new work of art. At the end of this section, the aim is to sketch a picture of who the humans of NDSM are and all their different ways of using the public space. In this second edition I will be talking to Corine Elemans, coordinator of NDSM PRINT: a new workshop for graphic art in the NDSM Loods, created by Grafisch Werkplaats Amsterdam (GWA).

Corine is not a designer by nature, but a writer. She ended up at GWA 11 years ago to bind her book in a unique way and never left. I speak to Corine after seeing a news item about the relocation of GWA and all its machines from Amsterdam-East to North. Why did GWA choose the NDSM as their new home? While I take a seat in the workshop opposite Corine, I ask her about the story.

“We were initially invited by STRAAT. They were looking for educational programming at their museum, ”says Corine,“ then they came to us because we have experience in int hat sort of thing. We also share the space with them here, they have a storage and a workshop here where they can, for example, build frames. We still have to give shape to that cooperation, because everyone is still finding their way through the entire corona situation. ” There is certainly experience with education at GWA. Corine tells me that the main idea behind GWA is to protect and pass on the graphic heritage. They do this by means of courses in the traditional techniques in graphic design to anyone who wants to learn it: young, old, from Amsterdam or not. Bookbinding, typesetting, etchings, woodcuts and much more, GWA tries to keep the traditional graphic craft alive.

I notice that there is a lot of activity going on in the workshop during our conversation. I see people lugging boxes and heavy crates with equipment. There is a workable atmosphere that is buzzing all over the place. “As you can see, we are still working hard,” says Corine with a smile. “We are not used to this large open space, in East we were a bit closed off. Our task here is also emphasized on to be open to the visitors of the yard. That is also one of the reasons why we are here, to really become part of the NDSM site and also to offer activities to the yard. The idea is to regularly open the big blue doors here so that people can just come in to see or print something, as a sort of monthly event. After following a course, people can also buy a strip card to use the workshop, and we will work together with the Kunststad. We are opening up to the warehouse and all its artists inside, but also to the yard and all other yard users outside. ”

It is clear that GWA has big plans for their place on the NDS wharf, but also for filling in the public space and providing inclusivity for the neighborhood. For example, an in-residence project with an artist from Novo Typo is coming up. “The idea is that we offer him a studio for a month or three weeks,” says Corine, “during that time he can show how he works and we will also give workshops on that.” The plan is also to do a project with the neighborhood: Mijn Opa Was Vroeger Drukker. This project is about the old generation passing on their skills to the younger generation, something that still has a lot of value. “There are a huge number of people who have worked in the graphics industry,” Corine continues, “and the graphics industry has undergone an enormous number of changes at a breakneck speed, also due to developments in technology. I actually want to link that to children or young people who are called busy. I am busy but my grandfather used to be busier. We also have an Arabic letter here, made by a Lebanese designer. We would also like to do more with that, we not only want to illuminate history but also keep up with the times. We are also very excited to work with artists from around here. ” 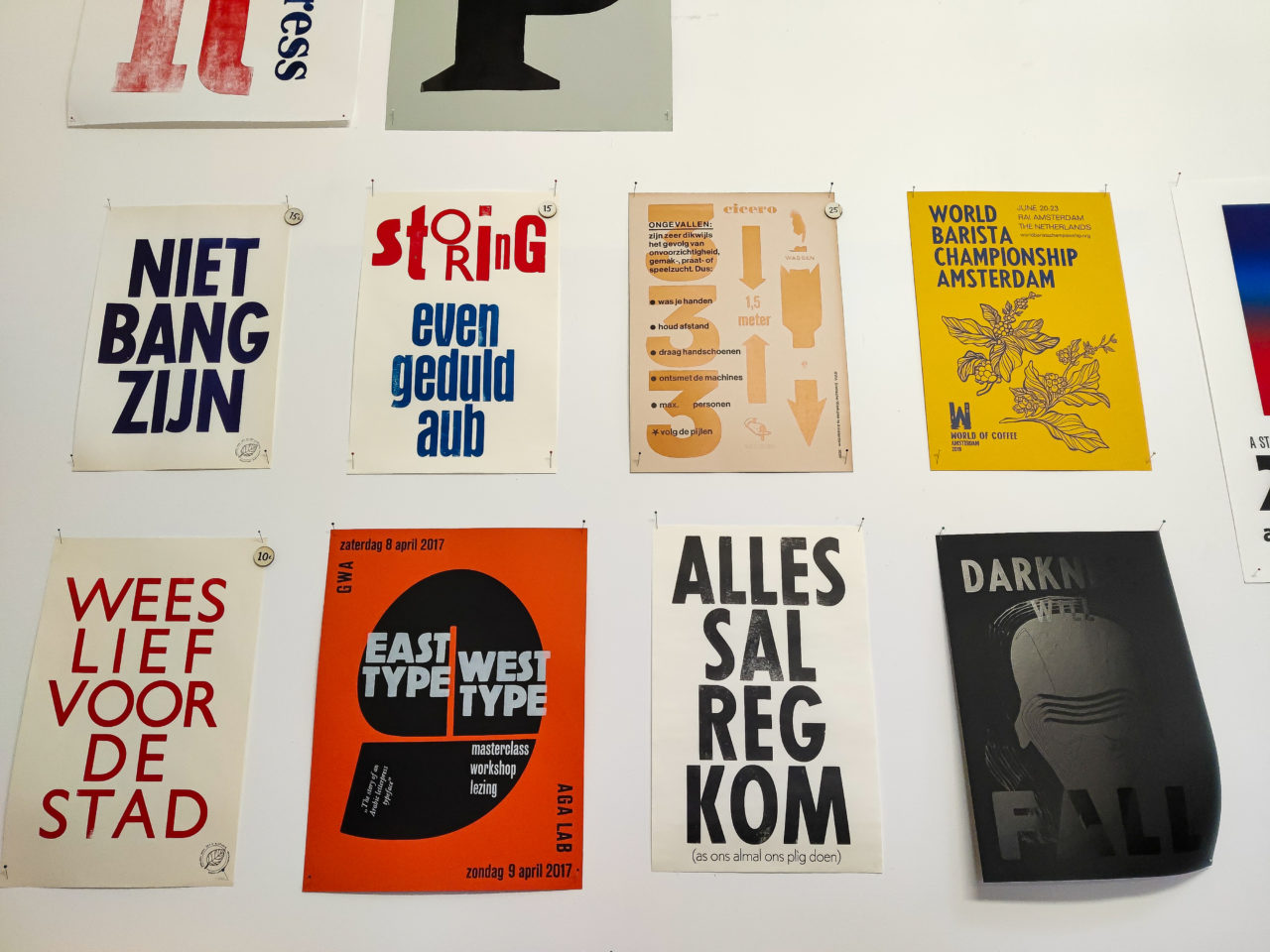 I then ask Corine about her first impressions of the NDSM shipyard and what this site means to her. “I’ve been coming here for almost 20 years,” she says, “it’s a place with a huge history, and you can feel it when you’re here. I would now describe the terrain as challenging; I think the contrasts are very big here. Because of this I think we should make sure that the cultural identity of the yard is safeguarded. It is a delicate balance between “wanting to move with the times” and “ensuring that the traditional soul of a place remains.” It will of course also be very different when it all starts buzzing again with the festivals and events. We actually came here in silence during the corona year, we will be ready for the public when it comes! ”

That’s how corona comes up. When I ask Corine about it, I see a familiar expression appear on her face, one that I have seen with several artists and entrepreneurs. “We actually experienced it in two phases,” she explains, “we were very militant in the first Lockdown and actually turned it into one big creative action. We asked the local residents at Amsterdam-East to send in sentences that gave them courage and then printed and distributed them throughout that part of the city. I did notice that when the second lockdown started last fall, people were less able to deal with the situation. Fortunately, we then moved workshops, and we had enough to deal with. It also gives us plenty of time to really be ready when we can open again later! ”

Finally, I ask Corine why this traditional craft of graphic design is so special and what it means to her. She has to think about her answer for a moment. “The most important thing, I think, is that in principle everything that is made here can also be produced digitally from a printer. But what you can never imitate digitally is the process. During the process, things happen that you will never encounter on a computer. For example, that you think you are printing something well, but the first printing shows that one of the wooden letters was just a little too low, so that it prints less well. You can then either start all over again, or you can continue with the imperfection you have. This then creates new ideas and that have such a valuable influence on your thinking, it is really different. You really have to take your time, I think that’s very special, that process is irreplaceable.