In the De Werfers column, I go on the hunt for special stories from all site visitors: from users to visitors to creatives and everything in between. I am curious about what motivates them to come to the NDSM wharf. At the end of this series, the aim is to sketch a picture of who the humans of NDSM are and all their different ways of filling in and using the former shipwharf. In this edition I will be talking to Richard Holt, owner of Tattoo Atelier Sixtyseven in the Y-Helling. 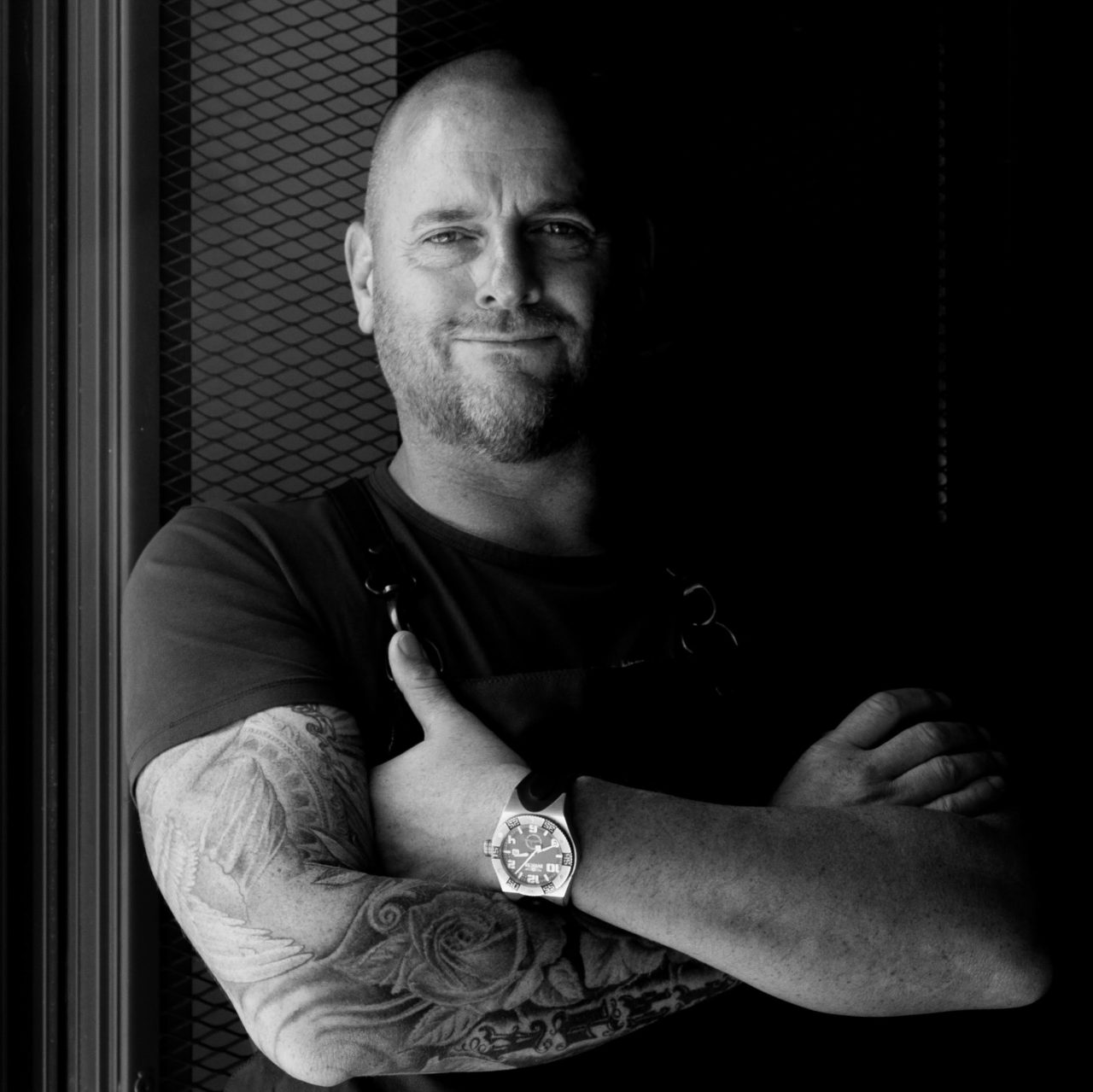 I meet Richard in his tattoo studio on a sunny Thursday afternoon. On the left side of the Y-Helling I take the stairs down and enter the studio through the fiery red doors. I am immediately welcomed by Richard who lets me enter behind the counter after which I take a seat on a large, brown Chesterfield sofa. When I look around, I see works of art hanging everywhere, together with the green walls and the sloping roof of the Y-Hellinh, the space makes an artistic impression.

After we got acquainted, I ask Richard how he ended up in this special place. “I have been living in Noord for a while, and often cycled past here,” begins Richard, “at one point I called the owner and explained that I had the idea for a tattoo studio. He thought that fit in well with what he wants to convey here and said that I could use the space. ”

I prefer the more intimate type of events here

“There was still a lot of work to be done and there also had to be some long discussions with the municipality. They thought that a tattoo studio would attract a certain audience, if you know what I mean.” Richard pauses for a moment and I nod; there is still a certain stereotyping about people who have tattoos by some people. “Then I took action,” continues Richard, “I wrote a letter with my wife with pictures of who we are and how the studio would be. When that picture was clearer, the municipality finally agreed and so I could start. ” 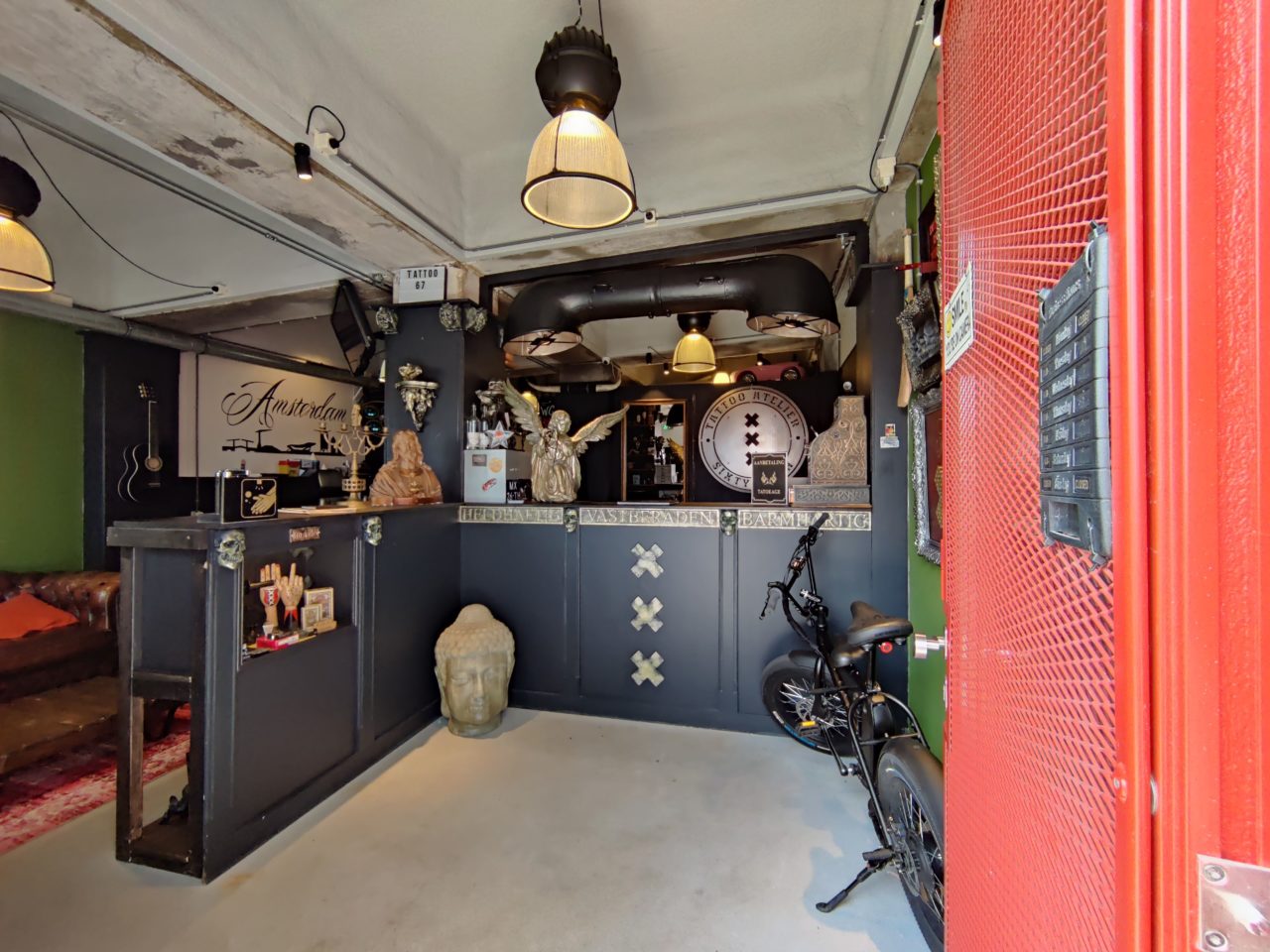 There is a lot of laughter during our conversation, Richard comes across as a bon vivant who is always up for a chat. I then ask him what he thought when he first visited the NDSM. “Phew, I can’t even think back that far,” he says, “I wouldn’t remember. My father and my uncles used to work at the old shipyard. ” Richard shows me an old photo of his father in his younger years with several other young men on the bow of a ship. “I notice that sometimes people don’t know what this slope was or what it was used for. I often get the question whether it was a bunker during the war, I always laugh a little when that happens. I think it is important that what it was here, the history of the old shipyard, is preserved and that the story is told. ” Richard puts the photo aside and continues, “When I came here as an entrepreneur I was the first in this street. It was still very quiet then, I had no neighbors, nothing. I thought it was quite exciting at the time and often wondered: what did I get myself into? That was in 2017, a lot has changed in four years and now especially with corona. ”

That got me thinking, how does the son of a shipyard worker become a tattoo artist? “I started drawing at a very young age,” says Richard, “I actually always wanted to go to graphic arts school, but due to personal circumstances that never happened. At one point I switched to oil paintings, I already had tattoos but never thought about actually applying them myself. During that time I ended up in Russia, where I was introduced with the art of tattoos. That was not the case in the Netherlands at the time, not in the way that it was really an art form. Inspired, when I returned to the Netherlands, I apprenticed in Amsterdam and later in Moscow. But it all started out of a passion for art. ” That passion can still be seen when you walk through the studio, the walls are decorated with paintings and sculptures, often also made by Richard himself.

I then ask Richard how he would describe the NDSM wharf. “In recent years, and now of course especially with corona, I think it is quite empty and quiet here. I would like to see more buzz with different types of markets, for example a little more to do with food. This terrain here and the way in which there are festivals and events here is also a part of the city’s identity, it is important that the cozy atmosphere returns and attracts visitors again. What I thought was really nice, a while ago before corona, they organized a very small-scale intimate festival with artists, here on the Y-Helling. That was really beautiful. I prefer those intimate types of events here. ” I also ask Richard what kind of people normally visit his studio during events and during normal days. “Really anything and everything: young, old, from Amsterdam, outside the city and internationally. I notice that many people from abroad are attracted to this area. When they come here they also see what else there is to do and then they sometimes come to me. ”

Richard also tells me that he works with students from the Mediacollege Amsterdam. “I sometimes contact them when I want to have something new on the wall or for another work of art in the studio. For example this lady who hangs on the wall here, ”while he tells me we walk to a large photo of a tattooed model with a top hat on the wall,“ that is printed on wallpaper that I had them made. I also once had a student in the studio who came along for a while, a kind of internship. That collaboration also gives nice new ideas and insights, which is always great to see. ” Our conversation comes to an end and while I take some more pictures of the studio, we have a chat about Amsterdam. Richard tells me he thought for a while about moving out of town, but didn’t do it in the end. I can well imagine why he made that choice, a born and bred Amsterdammer does not easily get out of the grip of the city. Why would you want that anyway?

Would you like to know more about Richard and his tattoo studio? Click here for the website and his portfolio. You can also visit Richard in his studio in the Y-Helling, he will be happy to tell you everything about his work!