On June 25th, Rosa Sijben launched her work Not Forever at the NDSM wharf as part of (Un)monumenting #2. We talked to her about her work and her vision of what monuments (in her opinion should or could be) in the context of art in public space.

The exhibition series (Un)monumenting is about the concept of monuments today and what they should be, and who determines that. In this context Rosa tries with Not Forever to make the multifaceted soul of the NDSM wharf tangible with a large ambiguous object. The object will roam the NDSM wharf for the next two months, each time under the care of a different wharf user while being charged with that person’s conviction about what the soul of the NDSM wharf is.

On a sunny day I meet Rosa in her workshop in Amsterdam-East. This is a breeding ground in a former school building where several artists have their studio. We take a seat on the sunny roof terrace of the building  and start the conversation about her work. 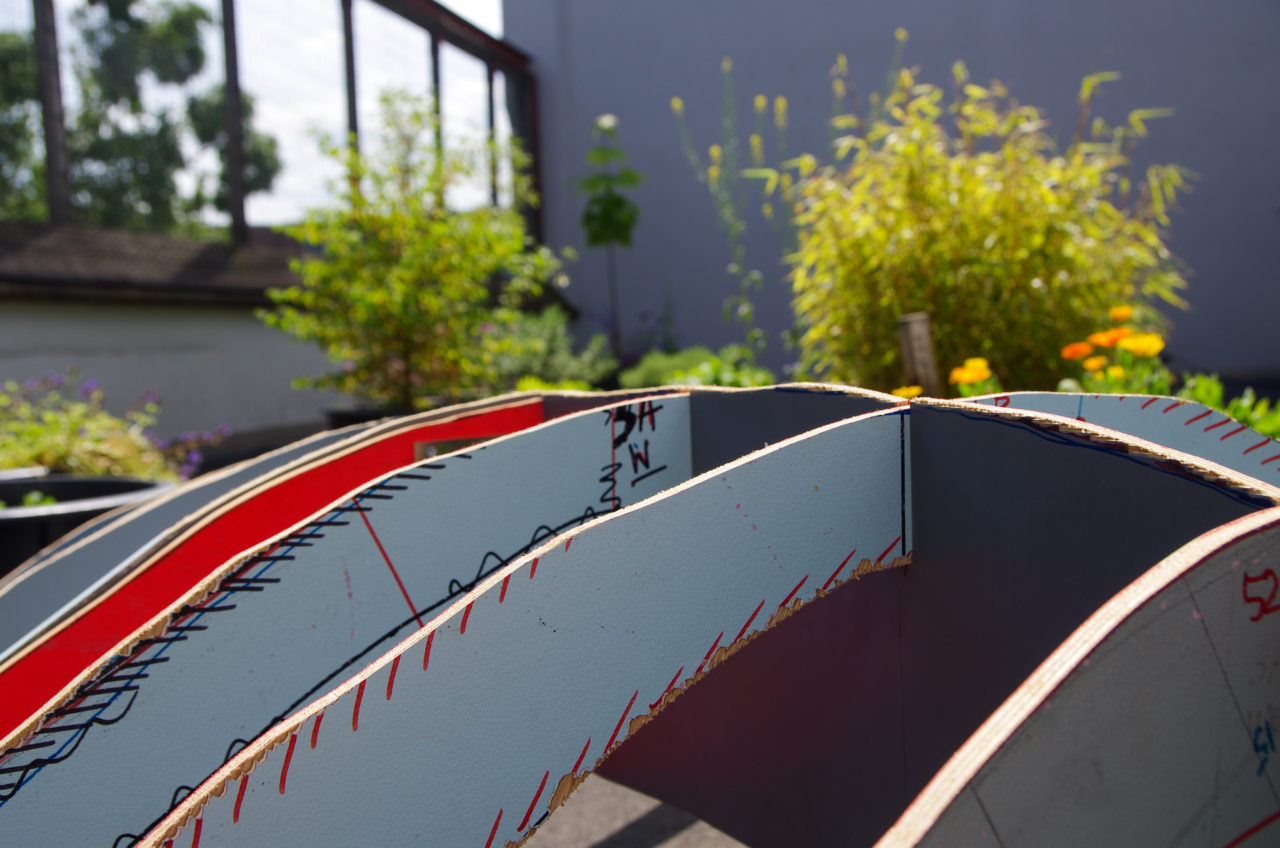 Rosa, when Stichting NDSM-werf asked you to create a work for (Un)monumenting, what went through your head and how did the idea for this work come about? How did NDSM come to your work as an artist?

“I think the question from Stichting NDSM-werf was partly due to the fact that I was involved in organizing a demonstration in Hoorn, where I grew up, against a monument of Jan Pieterszoon Coen, which is standing there in the public space. I think it’s outrageous that that statue is still there and that it takes so long to be removed, if it is ever removed at all. So I’ve been working on the concept of monuments and who should be represented in public space for some time now. In addition, I have made work in public space in the past, for example my work Demo and Pocketwork, which makes me think that I have ended up on the radar of Stichting NDSM-werf. Then the Stichting asked me whether I wanted to do something with the idea of ​​a monument on the NDSM wharf. Not so much to make a monument, but to respond to the idea of ​​monuments. I found this very difficult at first for several reasons. Firstly, The NDSM wharf is so grand and expansive that anything you put in it has a high chance of disappearing. Secondly, the NDSM wharf has been inhabited by artists for quite some time and so much has been done there. Every spot has been used so often to show something that I also found it difficult to relate to it at first.”

“Then I started thinking about what form this work should have,” Rosa continues, “I like to place my work in the middle of the world. I sometimes find it easier to show something on a construction site than in a museum, while in a museum something gets a lot of attention. But on a construction site, there’s much more of a context that you can tap into and respond to, which can give your work even more meaning. It is precisely this interaction that I often find interesting, I even like it to have a bit of a clash or for it to reveal a bit of the weirdness of art: the contradiction between a very practical, functional, direct reality and what art is. But art itself is also something very basic at the same time. Even in a museum it is still a piece of weight that has to be brought to that place. It is precisely those aspects that I often like about art because they are all just things. That forgetting of the ‘thingness of art’, we sometimes have that tendency with ourselves as well. We often consider ourselves only as subject, as something that has symbolic value and not as something that only takes up space, as an object or a thing. That idea fascinates me, if you were to take a painting completely apart in a museum you wouldn’t find a single piece that contains the value of the work. Just like if you completely dissect a person you don’t find a single piece that contains the soul or identity, it resides in your whole being.”

So, how did you eventually end up with this object?

“What I like about monuments is that they turn something you cherish together into something material and tangible. The idea for this work is therefore also about wanting to give shape to something that is elusive, which could represent the soul of the NDSM wharf. Which also makes it easy to make a topic of conversation. If there is a discussion about a statue in Hoorn, it is not only about that statue of course, but also about what that statue represents, it makes the subject concrete. If you were to ask me what subject makes this work concrete? Then that’s what the NDSM wharf is at this moment, and if we continue in the same way there won’t be any more very soon. I am talking about climate change, but also about the fact that gentrification is knocking at the door and that the NDSM wharf may be further commercialized and there will be less and less space for art. That is why I named the work Not Forever, also in response to a beautiful quote from Sasha Pevak (curator and artist ed.): ‘The monument becomes visible only when it is removed’.”

“What I also wanted to include,” Rosa continues, “is that it’s about caring, and you have to do that together, take care of a place. So because the object is so big and you can’t move it on your own, the caretakers always need several people to move it in and out or to a new place. Precisely those stupid practical consequences, I think that’s what makes this work the artwork it is. I think that’s where the moment arises that I’m looking for. Provoking the interaction, the dialogue and the bumbling. It is the intention that each caretaker of the object give their own interpretation, so that the object acquires value. The work will be launched on the 25th of June, but I think in a way it is not there yet. The object is there, but it is precisely in the next two months that all the experiences it goes through collect in the object, that is what together becomes what I want it to be. ”

You have also included the aspect of transience in your choice of materials, can you tell us a bit more about that?

“Certainly, besides fitting into the concept of this work, I also think that as artists we should take responsibility for the materials we choose for our artworks. Especially for a temporary job like this, I think it’s important to orientate myself on what materials I might be able to reuse from other works and what materials have the least impact on the environment. Certainly with a work like Not Forever, which is also partly about climate change, I would find it hypocritical to throw a whole mountain of plastic on the table. That’s why I chose to use materials from Sexyland’s recently demolished building. I think it’s nice that there is literally a piece of NDSM wharf in it. That is of course not only because of Sexyland, but also because of what that building used to be.”

“What I don’t know yet is what to do with the object after the two months that the work has been active. What reassures me somewhat is that all the material I used for it, including the screws, are all things that were already waste before it became this object. That eases my conscience somewhat. I’m also curious what it is then, what it has become in meaning. I think the final destination also depends on what the collective idea makes of the object.”

Rosa, how do you see art in public space, what makes it different from art in a museum or in an “inside”?

“The main difference is that you have not asked to see art in public space, that is something you are confronted with whether you like it or not. That’s what I really like about art in public space, because it integrates more into everyday life than much other art. There is a certain piece of art that I see on my way home every day, and every day I look at it differently depending on my own state of life and state of mind at the time. It changes shape, because my thoughts change and time passes. That can also happen with monuments, just look at Jan Pieterszoon Coen, public opinion is changing (although there have always been protests against the statue), while the thing itself still looks exactly the same. When something is in a museum, it is also viewed differently. I find that interesting, how space and time influence the way we look at something.”

Do you want to know more about Rosa Sijben and her work? Check out her website here. (Un)monumenting continues! In addition to the already visible work Ademhaling van de Stad by artist collective Frerara on the NDSM Billboards, the third edition of this exhibition series is also in the making. Don’t want to miss anything? Follow Stichting NDSM-werf on our socials and sign up for our newsletter (in Dutch) where we tell you the cultural program at the NDSM-werf every month: