On Sunday, city poet Gershwin Bonevacia performed in front of an almost empty NDSM yard. This was not due to bad promotion from the NDSM-wharf foundation, who manages the former shipyard in Amsterdam North, but because of the limited possibilities within the current emergency ordinance in the Amsterdam-Amstelland Safety Region. Contrary to the catering industry, cultural institutions with a roof and now also open-air theatres, cultural activities in public spaces are not yet allowed to be called upon. Not even now that the foundation has opened the Summer wharf: a safe testing ground with oceans of space, where the one and a half meter distance can easily be guaranteed.

The so-called ‘Anderhalvemetertafel’ of City District Noord also confirms that these measures were taken in the case of the NDSM-wharf. This committee examines requests for activities on a weekly basis and tests them against the rules of the emergency ordinance. The NDSM-wharf foundation has already seen a number of well-developed ideas die out. The feedback was then that the plans are not rejected in terms of content, but simply that they are covered by the event permits and precisely those are not issued until at least September of this year.

Pressure on the parks can be relieved

The NDSM-wharf foundation, which is responsible for keeping the 10 hectare site in Amsterdam North safe, clean and intact, as well as its cultural programming, has worked hard in recent months to make the available space relevant to the city. By the striking of the coronavirus, the organisation saw all the events disappear and with it more than half of its income. The intelligent lockdown made clear that the foundation could offer added value for the city and its inhabitants: free space. Now that Amsterdammers are allowed to go outside again, the need for outdoor space is great, especially now that the pressure on the parks is increasing. In a short period of time, the foundation and spatial design agency Overtreders W designed a grid for part of the site, making the one and a half meter distance easy to maintain and adding new functions to the site. Think of vegetable garden containers for Amsterdammers without a garden or outdoor space, opportunities for sports or picnics next to the IJ river. 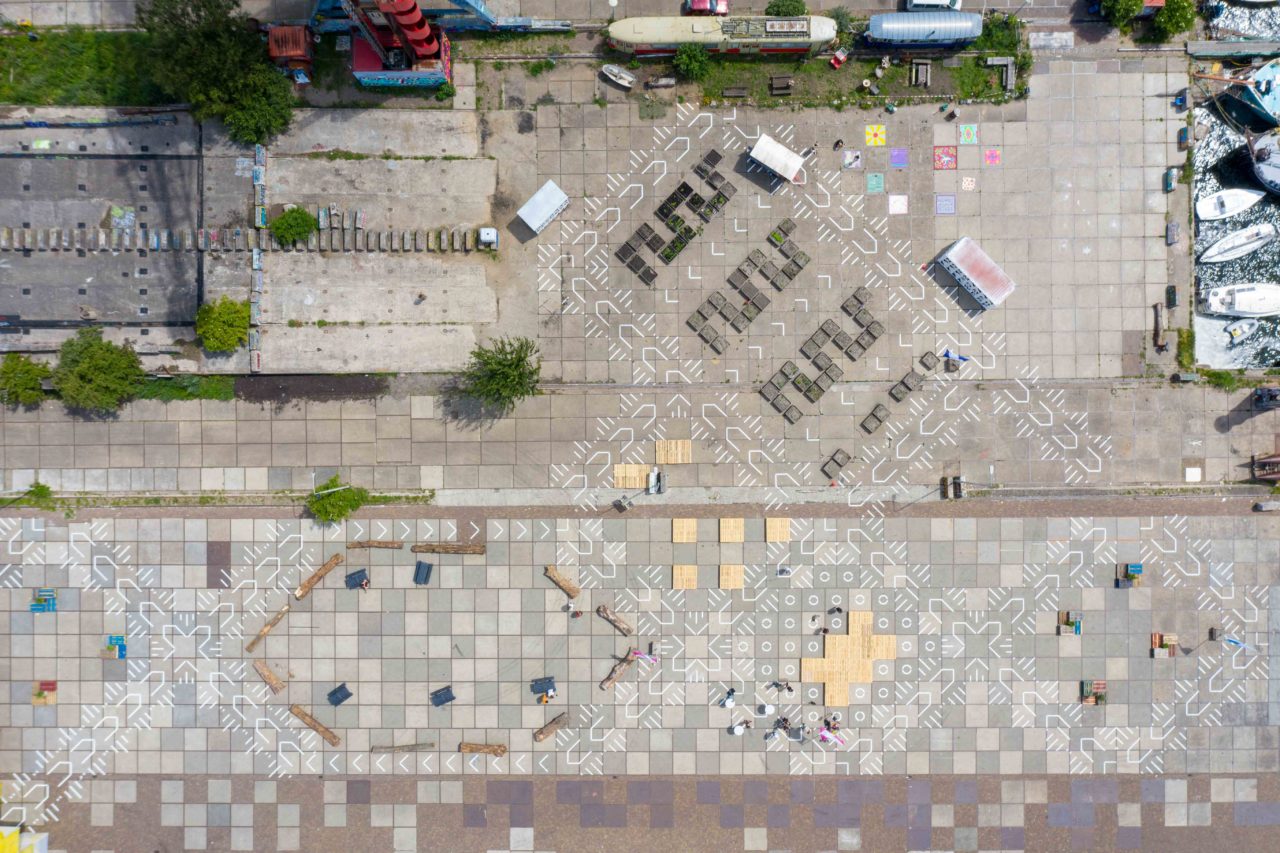 Art and culture in public space, important pillars of the foundation, have also been considered in the design. Nevertheless, this is still impossible due to the emergency ordinance. A performance in the public space is designated as an event. “It is understandable that events are restricted, but it is absurd that everything is lumped together”, says Tim Vermeulen, director of the NDSM-wharf Foundation, “On a terrace people can meet without restriction, provided that sufficient distance is kept, and activities are now also taking place. On the NDSM site we can place people at a distance of up to 5 metres from each other and yet our hands are tied. This requires customization within the emergency ordinance”.

Last week it became clear that open-air theatres such as the Bostheater in the Amsterdamse Bos – which admittedly falls under the municipality of Amstelveen – are now judged in the same way as catering establishments. Other event locations in the city can also open terraces for hundreds of visitors under the guise of their hospitality license. With its event profile, the NDSM-wharf threatens to fall between two stools. And that is a shame, people say. “There are numerous artists, theatre makers and other creatives who are eager to develop activities here, such as street theatre, a drive-in stage for film, theatre and art or small performances on the Y-slope,” says Vermeulen, “we have had to say ‘no’ to all our partners for now”. How long this situation will continue is unclear. Events are prohibited nationwide until the 1st of September, and this is also laid down in the emergency ordinance of the security region.

MORE INFO ABOUT THE SUMMER WHARF