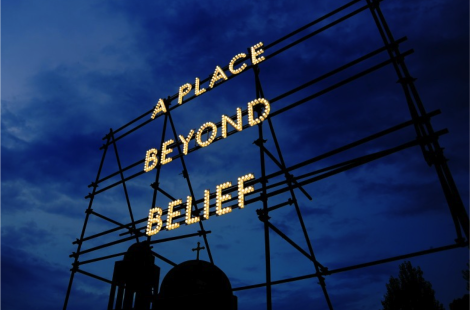 “Rather than a political broadcast, A Place Beyond Belief stresses the importance of faith, not in a strictly defined moral or religious cadre, but more generally, a faith in humanity in all its individual and collective guises. The suggestion is of a world characterised by competing ideologies but linked by the means people use to proclaim them.”

A PLACE BEYOND BELIEF was a light artwork by the Turner Prize nominated British artist Nathan Coley. The poetic textwork was on a dike valley for the NDSM shore. Clearly visible from the pond it formed a beacon for anyone who reached or left the former shipyard through this road, and strikingly memorized the character of this area as a place of imagination. The link of place (PLACE) and value (BEYOND BELIEF) shows what NDSM ever was, will be and will be.

A PLACE BEYOND BELIEF was an initiative of New Dakota, which was developed in collaboration with the NDSM-Werf foundation and the Van Abbemuseum. After three years on the NDSM, the work was included in the collection of the Van Abbemuseum.

Artist statement van Nathan Coley over A Place Beyond Belief, 2011

A young woman sits in a New York subway carriage, a number of weeks after the terrorist attacks on the twin towers. It is early morning, and the city is grudgingly back at work. Like many of her fellow passengers, she is tired, emotionally fragile, confused and angry – still trying to come to terms with what has happened to her city.
A Sikh man sits opposite her, wearing a bright orange turban. There is a strong tangible sense of hatred from the passengers towards the man – a feeling of raw anger and disgust. The man’s eyes are averted, the commuters stares un-replied. His head is bowed, he is sobbing.
The train travels on, stopping at the next station, the doors open and close, passengers get on and off. After a few stops and more torturous minutes, the man gathers his belongings and gets up to leave. Standing by the exit is a young black woman with a newly born baby. As the man approaches, he reaches into his pockets and takes out a handful of dollars. Without saying anything, he carefully places the money in the blankets of the pram and exits the train.The doors close, and the remaining passengers burst into tears.
At that moment, the woman realises that for New York to get past the attack,to move on and rebuild itself, it has to think anew, it has to look again. It has to get to a place beyond belief.