TO GO ALL STARS | PLLEK X TICKET TO THE TROPICS

The power of collaboration

ADE Weekender | Into the Woods

TO GO ALL STARS | PLLEK X TICKET TO THE TROPICS 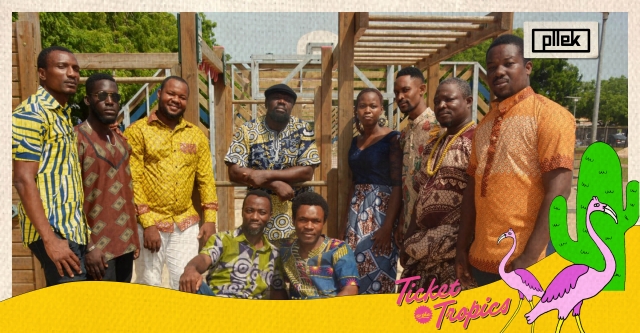 TICKET TO THE TROPICS, KNOWN FOR THE HOT NIGHTS AT PODIA AS PARADISO, THT AND BITTER SOUP, COMES OUTSIDE TO PLAY.

Ticket to the Tropics, Paradiso and Pllek will organize this summer a series of live music afternoons on the city beach at Pllek in Amsterdam-Noord. Right in the sun, feet in the sand, overlooking the clear blue water of the IJ and of course the unparalleled, sultry sunsets. You would almost think that you are on vacation.

The first edition is a fact:

Togo All Stars is a collaboration between AMSTERDAM ROOTS FESTIVAL, TICKET TO THE TROPICS and Pllek

TOGO ALL STARS
Take a good look at the map of West Africa and look for the city of Lomé, the capital of Togo. Imagine how the music should sound like that. Just over 100 km to the west is Accra, Ghana, the city where high-life music began in the 1950s. One more hour and you will arrive in Lagos, where Fela Kuti created his afrobeat.

One of Lomé’s most important bands is Togo All Stars: with a quirky Togolese sound, drenched in afrofunk and voodoo rhythms, the band embodies both deep-rooted traditions and modernity. A surprising combination of two generations.

The rhythmic sound of flowing guitars and pulsating horns form the backbone of Togo All Stars, Voodoo’s musical core and that together with afrobeat and funk. If you want to hear the original rhythms of the most funky gods on earth, you have to take that card again and travel to Togo. Or visit a Togo All Stars concert, they honor that music history.