This winter, Stichting NDSM-werf presents (Come To) Light, an exhibition consisting of light works by international artists. With their works, they highlight themes or persons that are important to them. They answer the question: who or what should be more in the spotlight in public spaces? The works can be visited for free and are spread over NDSM. 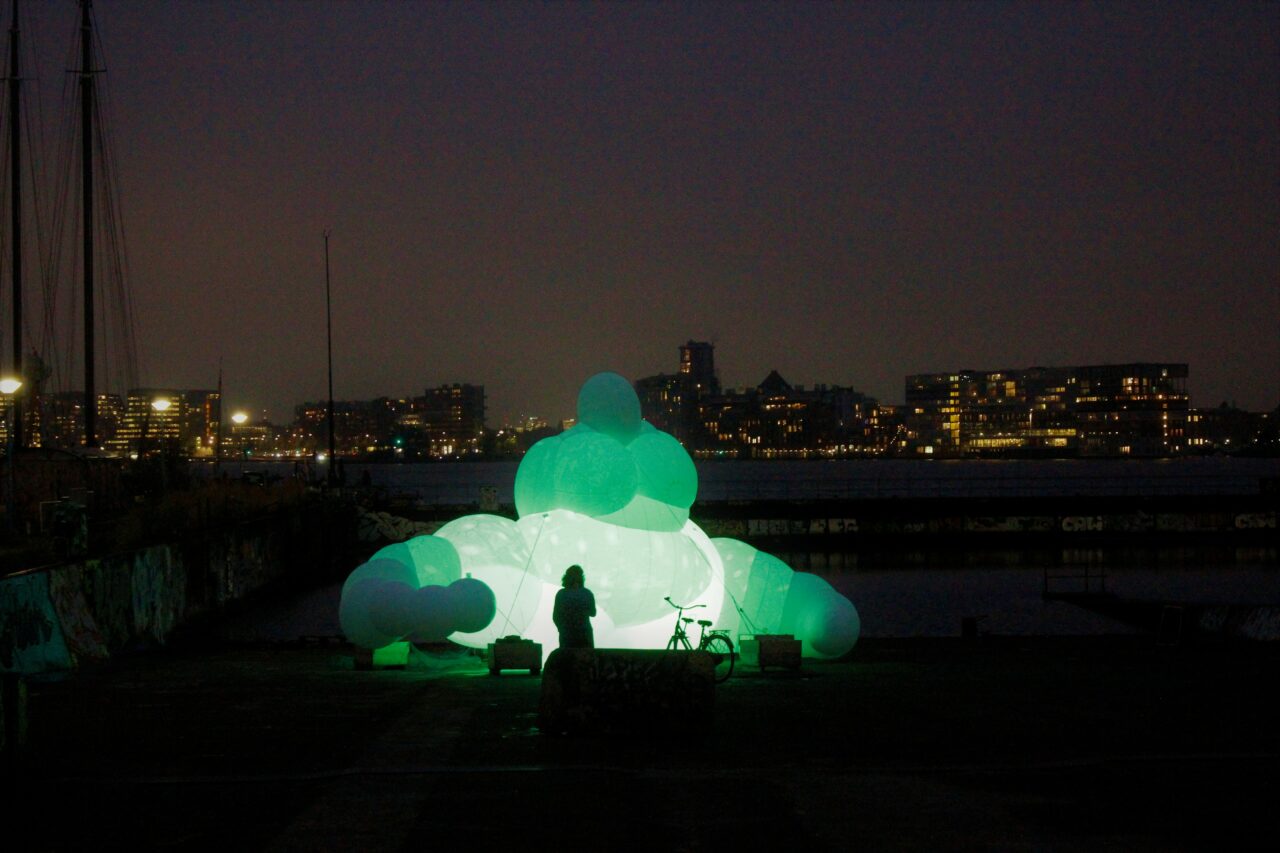 South African artist Goldendean (Dean Hutton) makes inflatable soft sculptures that represent the contours of their own body. As a special project for the NDSM shipyard, they created the ‘Big Fat Trans Light MerQueer’, a hybrid between human and sea monster that seems to have crawled out of the IJ-water – with tentacles. They drew inspiration from folktales of merfolk like the ‘Mermaid of Edam’ and ‘Mamlambo’, a river goddess with a snakelike appearance from South African and Xhosa mythology, but who is often depicted as a mermaid. When caught, they are said to bring prosperity.

Goldendean shares moments of soft courage to affirm the right of all bodies to exist, to be celebrated and protected – to invoke those tender feelings through deliberate acts of remaining silly and playful, sometimes a clown, sometimes a warrior, always vulnerable… Radically soft in an uncompromising world… A tenderqueer investing trust in an audience to respond in kindness, to let our bodies be safe together, to queer space no matter the way we sometimes fail each other.

In his sculptures, installations, and videos, Johannes Büttner (Germany, 1985) addresses socioeconomic themes such as energy, labour in the digital age, and power. He works together with people from various backgrounds: from mindset and business coaches and bakers to people from the ‘digital working class’.

Johannes Büttner shows sculptures he showed at Into Nature. An exhibition in the Bargerveen in Drenthe curated by Hans den Hartog Jager, in which energy was central. Büttner’s luminous sculptures work on batteries made of aluminum, magnesium, and alaun crystals. According to its myth, these batteries provide infinite energy. Büttner had the batteries designed by ‘free-energy engineers’, an online community that believes environmentally friendly, sustainable, and free energy sources have existed for a long time. After a conspiracy theory, they are hidden by large companies and governments for their own interests. Somewhere between truth and fiction, (pseudo) science and belief structures, and in response to the lack of opportunities to verify this, the work conjures the search for utopian ideas, paranoia, and the attraction of YouTube rabbit holes.

Next to these sculptures, Johannes shows lightboxes with advertisement-like pictures of ‘survival hacks’ for a post-apocalyptic scenario. Confronted with a global pandemic and an increasing awareness of climate change, the work from 2016 could be perceived differently now. DIY creations and creativity – to be able to deal with upcoming catastrophes – have become unavoidable.

Alice Wong is a story designer. By exposing how our perception of reality is constructed, her practice aims at turning complexity into understandable narratives. For this project she worked together with Crys Leung, communication designer, whose work inquires the role of media and its relation to identity.

Alice and Crys unveil ‘COHESION’, a large-scale installation that connects fragmented elements on the NDSM. The reflective circle stands for unity and for collectivity; we can all come together and become more than our individual parts. Since the total circle cannot be grasped from a single position in space, the work creates an infinite number of perspectives according to the vantage point. The process of interaction from different angles, heights, and distances makes clear how we collectively shape a shared reality, where no single perspective should stand above the other. Visible and invisible, seen and unseen are all equally valued.

[on display from December onwards] Memories of an Archive, 2021

With her work Memories of an Archive, belit sağ (Turkey, living in the Netherlands) focuses on the first generation of women from Turkey who followed their husbands to the Netherlands in the 1970s. Despite the fact that the NDSM shipyard was a prominent place in the history of labor migration in the Netherlands, there was no place at NDSM for these (and many other) women. Even in the archives, information about them has been limited to singular and often context-free fragments. This work speculates what would happen if these women, hidden in the archives, did take up space on this site. Through her video and augmented reality installation, sağ gives a place to the fragments that seep through the cracks of the archive. By bringing these to the surface, the role of NDSM as a location in the migration history of Amsterdam becomes visible.